Ordinarily the opening credits for most of HBO’s own programming is wonderful. But I have a real bone to pick with what I feel is one of the worst… the opening title sequence for The Leftovers. Changed after the first season (now in its third and final season) the ‘new’ opening credits are aesthetically ugly, accompanied by a folksy song and completely out of sync with the tone and style of the show.

The Leftovers Original Opening Credits Compared to The Revised

I rarely fast forward through the opening credits for most of HBO’s own series because they are usually imaginative, beautifully executed and seamlessly produced (think Game of Thrones, American Horror Story, Mad Men, Masters Of Sex, True Blood and Westworld, to name a few). But I find the revised credits for The Leftovers, accompanied by Iris DeMent‘s bluegrass, guitar strumming “Let The Mystery Be,” too intolerable to sit through.

The Leftovers Series summation for those of you unfamiliar with the show:
More than three years ago, 2% of the world’s population inexplicably vanished. 140 million people, gone in an instant. No country, no state, no city was spared, except for one small town in eastern Texas. Population: 9261. Departures: Zero. This is the setting for a tale of two families: the Garveys, who have moved to this special place, and whose lives were forever changed by the Departure, and the Murphys, a local family, who seem to have been spared from an event that shook the rest of the world.

Season One
It’s obvious that some people, somewhere, in the offices of HBO felt that season one’s opening was too dark. Animated in the style of classic Renaissance religious paintings, complete with craquelure, it shows people being torn away from loved ones as they ascend to the heavens in a stylized example of The Rapture. 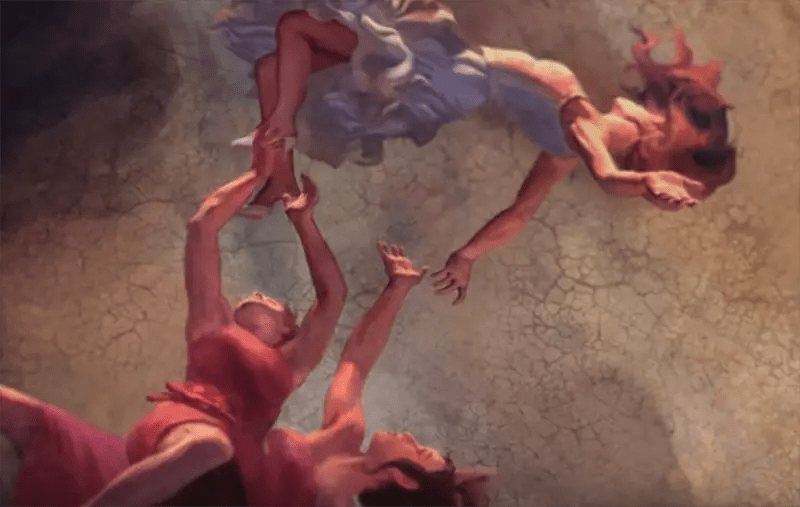 The accompanying instrumental music is appropriately moody and mysterious. Designed by Garson Yu, founder of yU+co, the opening evokes a range of emotions from mystery to torment, beauty to loss. The subjects loosely echo the characters and story lines as we see desire, despair, ecstasy, fear and horror expressed by the imagery. 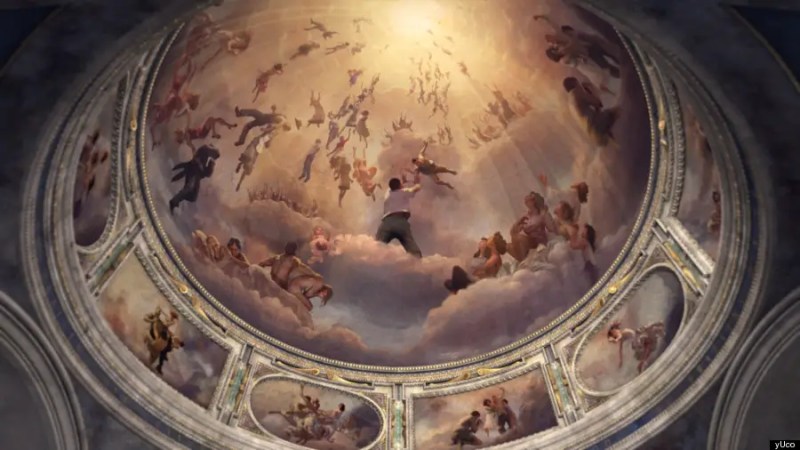 When the first season was reaching its finale in 2014, The Huffington Post published an article about the title sequence referring to it as beautiful and imbued with cathartic power. “Yu revealed that at first series creators Damon Lindelof and Tom Perrotta had no idea what they wanted for an opening sequence other than something involving Renaissance art. “The show deals with a lot of emotional aspects, a lot of stories about humanity’s reaction to tragedy and oppressions,” Yu said. “So I came up with this idea that what if the stories were depicted on a Renaissance fresco painting.” Yu also wanted to emphasize the religious themes from the series in the opening, so he worked with the artist behind title sequence, Jon Foster, and came up with the concept of setting the fresco paintings in a cathedral setting. “Nothing can be more epic than you walking into a cathedral,” Yu said. “It’s enormous and the reason why is because you feel the spiritual aspect of it and it’s not just physical. That’s what we were trying to accomplish with this sequence.”

The Leftovers, Season One Opening Credits:

Season Two
So when I sat down to the first episode of Season two, you can imagine my surprise at the entirely different title sequence that greeted me. At first I thought it was a joke. Really, I did. 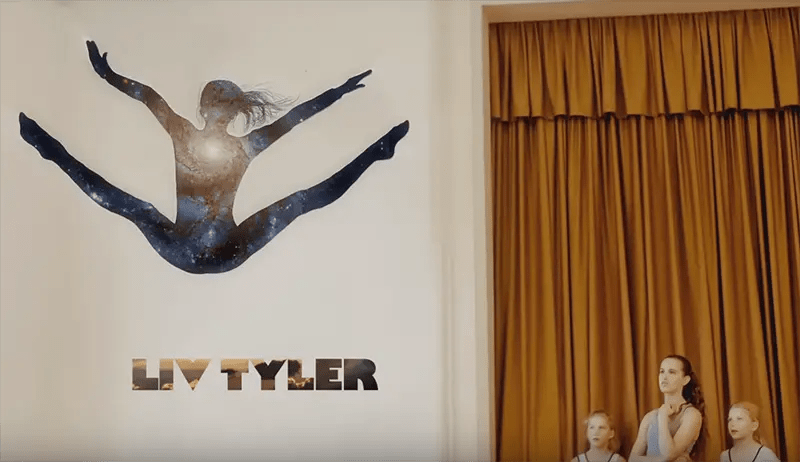 It’s obvious that the opening was changed to be friendly and more upbeat, but the show itself did not change in terms of the characters, mood, storyline or wonderful soundtrack. Therefore the new opening feels oddly out of place, even misleading, in terms of setting up what the viewer ought to expect.

The new opening, created by design company Elastic (True Detective, Masters Of Sex) is a montage of happy family photos. People on vacation, attending football games, fishing, jumping off a pier into a lake, etc. — but in each snapshot one person is “missing”, replaced by a silhouette filled celestial imagery. These do not look beautiful or mysterious, but instead come off as amateur computer cut and paste. Meant to be friendlier and lighter, the song’s lyrics telegraph the plot: “Some say once gone, you’re gone forever/and some say you’re gonna come back,” sings DeMent, before adding, “I think I’ll just let the mystery be.”

I was glad to see that I am not alone in my preference. Feedback on youtube shows that many people feel as I do. How do you feel?

All 5 Of The Brian Williams Rap Mash-Ups Including The Epic Rapper’s Delight.