These beautifully designed limited edition Blu-ray packages for three of Sagmeister & Walsh’s typographic films, currently shown as part of the traveling exhibition “The Happy Show”, each contain a unique earthenware USB drive (specific to each film), the disc and a certificate of authenticity. All the black boxes were individually written on by Stefan. 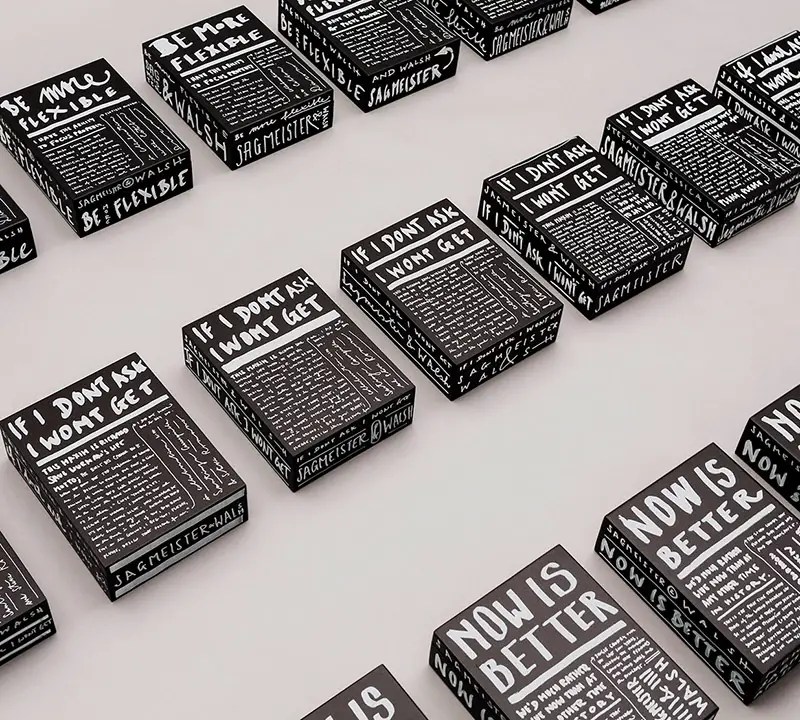 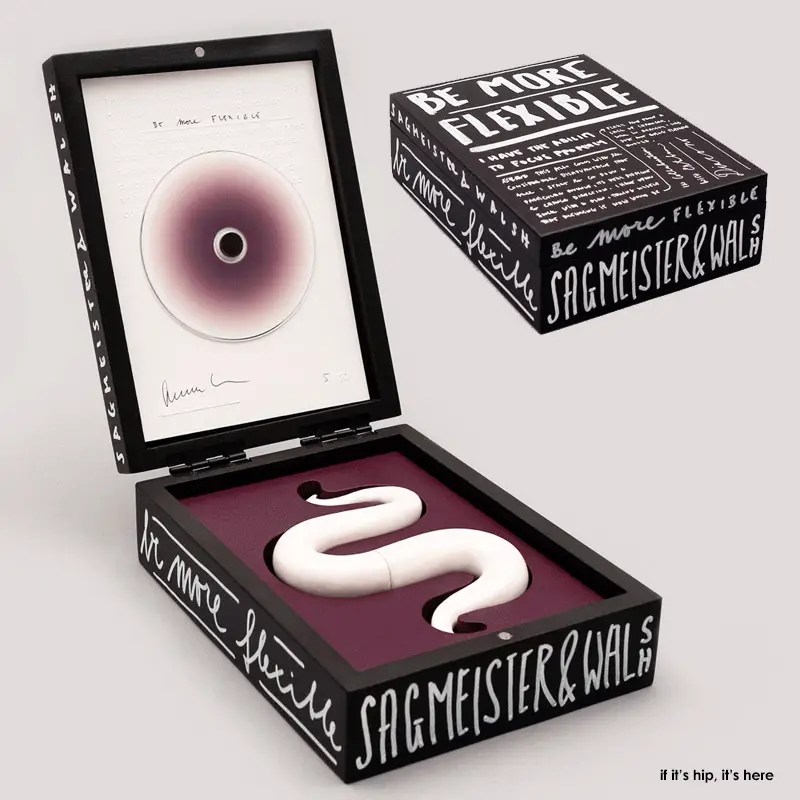 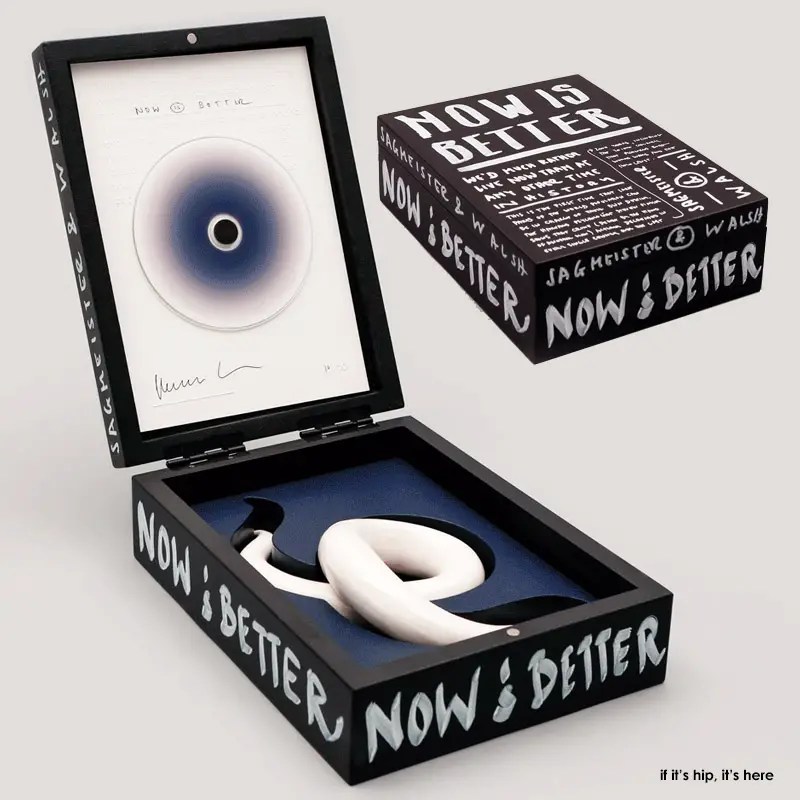 Centered around the designer’s ten-year exploration of happiness, the traveling exhibition of Sagmeister & Walsh’s The Happy Show presents typographic investigations of a series of maxims, or rules to live by, originally culled from Sagmeister’s diary, manifested in a variety of imaginative and interactive forms.

To contextualize the maxims that appear throughout the exhibition, Sagmeister has gathered the social data of Harvard psychologists Daniel Gilbert and Steven Pinker, psychologist Jonathan Haidt, anthropologist Donald Symons, and several prominent historians.

In addition to individual works, some of which have been custom-made for this exhibition, The Happy Show includes a personal narrative, as Sagmeister’s individual experience is portrayed beside social data detailing the role of age, gender, race, money, and other factors that determine happiness. 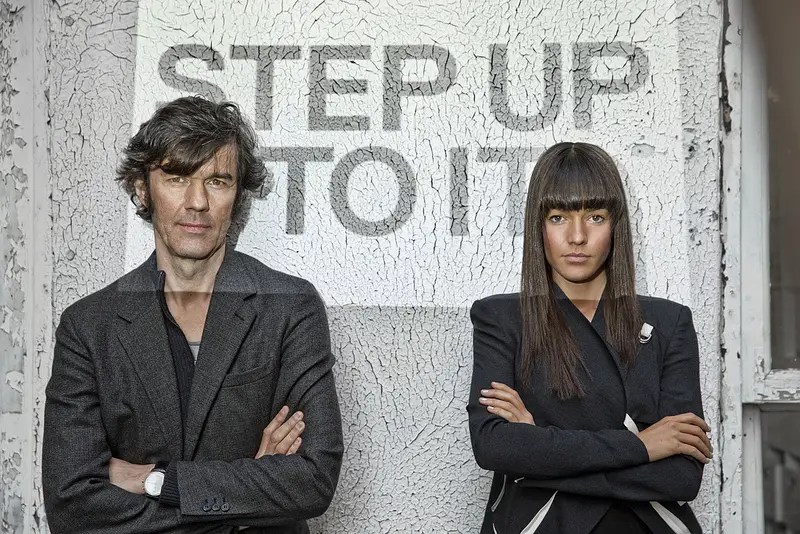 above photo of Stefan Sagmeister and partner Jessica Walsh, credit to John Madere

Bill Rodgers of C-file reports that “The Happy Show was a 2012 traveling exhibition by the New York design firm Sagmeister & Walsh. Spearheaded by Stefan Sagmeister, the show premiered at the Institute for Contemporary Art in Philadelphia in August 2012 (and has since traveled through Los Angeles, Toronto and New York).

In addition to being a personal narrative of Sagmeister’s quest for happiness through meditation, therapy and pharmaceuticals, The Happy Show also looked at happiness through social data with factors such as age, gender, race and money. Sagmeister’s work employed graphic design, graffiti, bright yellows, free gumballs and activity cards suggesting things such as cutting out of the show early to go home and have sex.

Video was also a feature of that exhibition. Three of those films are now available in a limited series of boxed USB drives. Each box was written on by Sagmeister; they bear individualized therapeutic reminders to be present, flexible and to ask for what you want.

The USB drives themselves are made of ceramic and resemble horns, or tentacles or worm specimens. They look like exhibits taken from the mental health wing of the natural history museum. 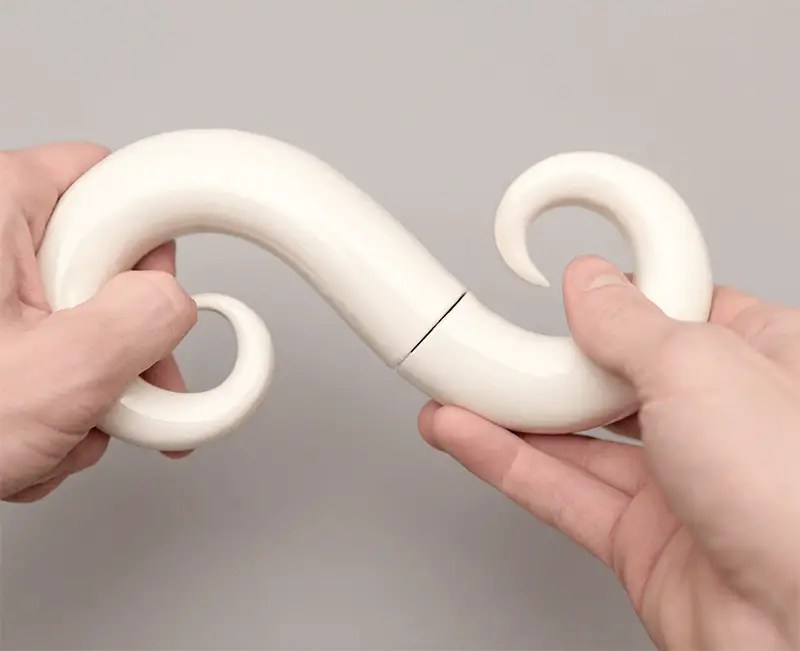 Physical media is dead. The conventional wisdom among people who produce this soon-to-be-ancient material is that physical media works best when it enhances the experience of the song or video contained within. Within the last decade we’ve seen musicians release albums that are pressed on X-ray images or are part of a vast alternate reality game.

Sagmeister, who has worked within the music industry creating album art for musicians such as Lou Reed and OK Go, seems to be working with similar logic as he created a highly-personalized artifact from his exhibition that draws the experience of his work forward, even if you’re only viewing it from your home computer.”

all images and information courtesy of Sagmeister&Walsh