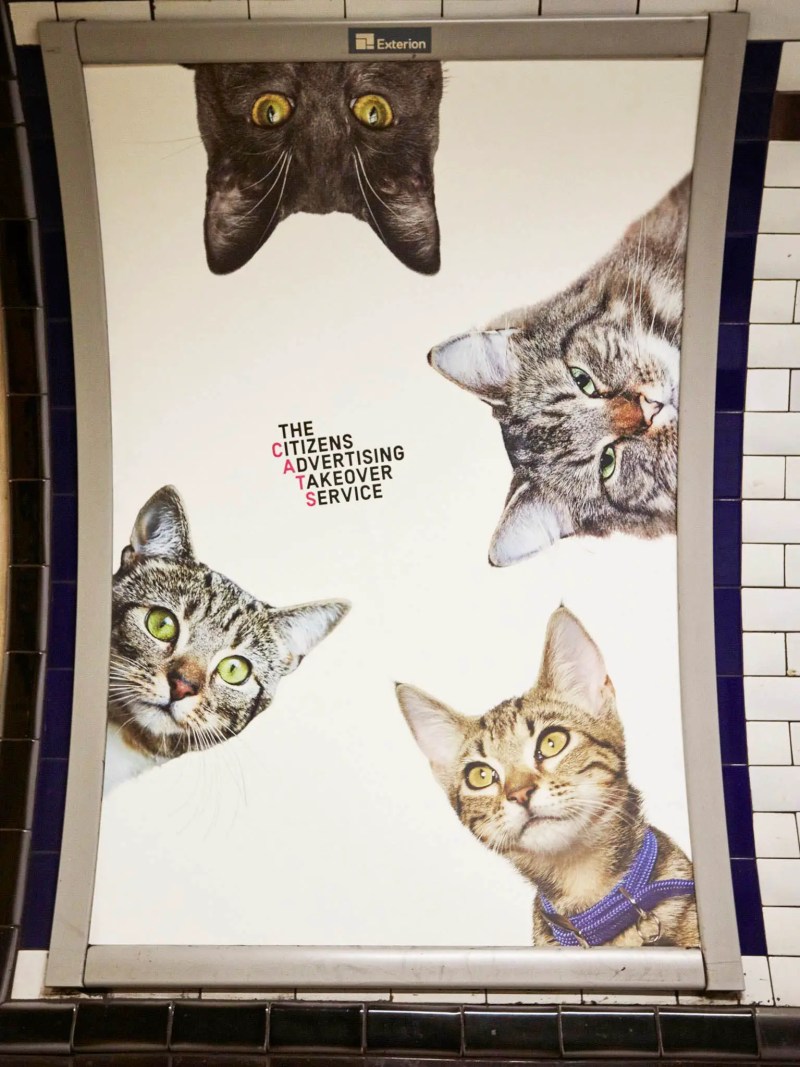 South London’s Clapham Common Tube Station has been overrun by cats. Not literally, but for the next two weeks 68 advertisements in the station have been replaced with images of cats by The Citizens Advertising Takeover Service (C.A.T.S.).  The feline-festooned station is brought to us as a result of a kickstarter campaign.

People are going to hate me for knocking anything that has to do with cats. I’m not. Instead I’m knocking the fact that this buzzworthy project could have done much MORE for cats. Read on and you’ll understand. Glimpse, a new UK collective who is behind the project, claim in their own words that “This isn’t a clever marketing stunt for a pet food brand, or a guerrilla campaign for a new TV series.”  With the url “cats not ads“, they position this as a welcome alternative to an ad campaign. But an ad campaign is exactly what it is, only concealed to the point that it flies in the face of its objective. 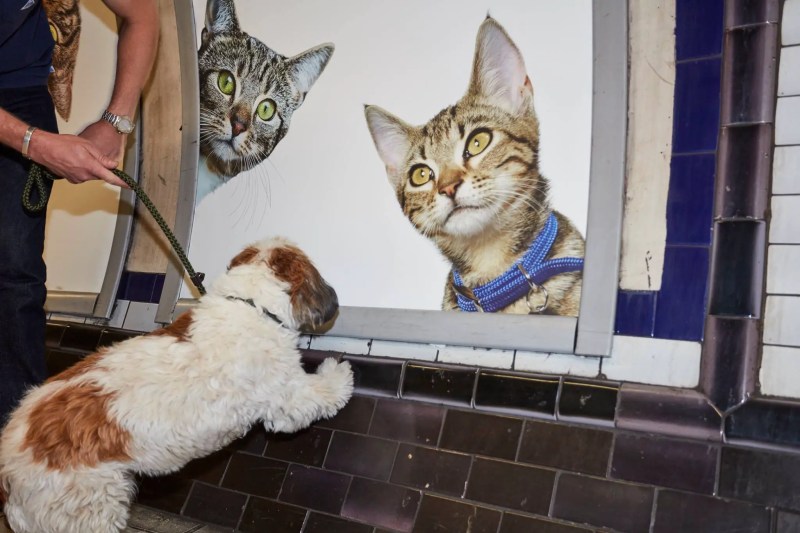 Founder James Turner tells us that “The people behind it are volunteers who raised the money on Kickstarter and want to inspire people to think differently about the world and realise they have the power to change it.”

He goes on to explain his company’s strategy:
“Instead of focusing on the problem, we create “glimpses” of a world where things are getting better. Back in February we asked ourselves to “imagine a world where friends and experiences were more valuable than stuff you can buy”. The team began thinking about crowdfunding to replace Tube adverts with something else. Beautiful forests? Time spent with family? Hmmm. We wanted this to become famous, so we needed something the internet would love. Frame it that way and the answer’s obvious. Cats.” 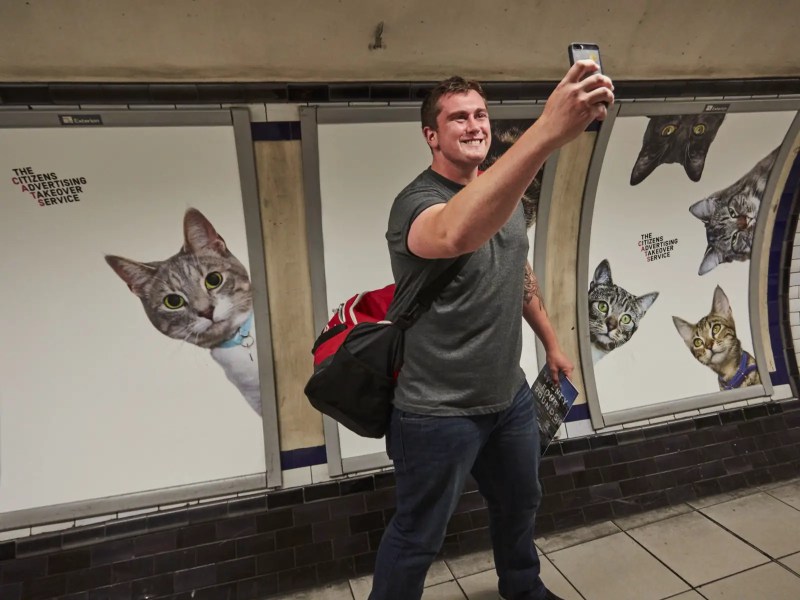 Not that I wish to insult Glimpse’s objectives in any way, but with the simple inclusion of the website (catsnotads.com) or phone number on these ‘non-ads’, hundreds of cats could be adopted, saved or spayed. 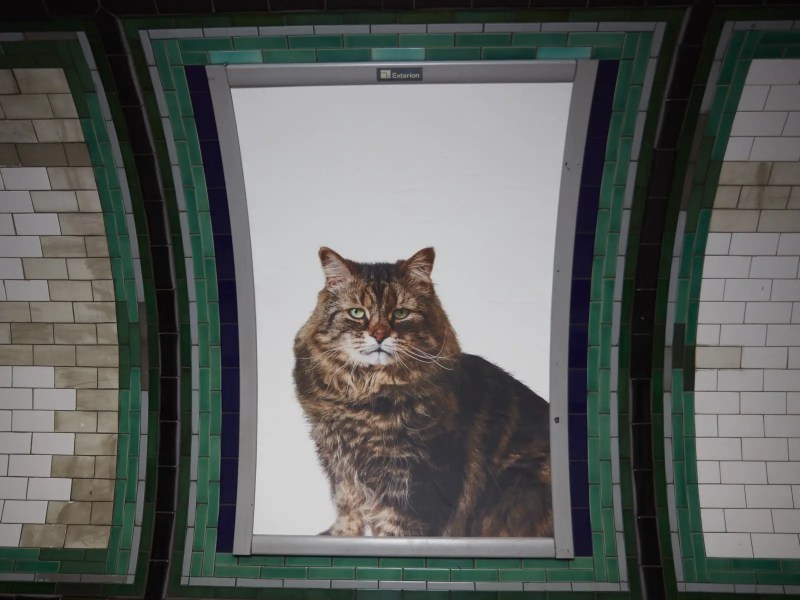 Instead people have to ‘work’ to find out that these blind images of cats REALLY are a guerilla campaign for cat adoption. Despite the fact that there’s no directive on the photos of cats in the station, on the website (I guess they expect you to google Citizens Advertising Takeover Service to find it), it is made clear that this is a partnership with two UK pet charities.

Many of the cats featured in the takeover are sheltered cats from Cats Protection, the UK’s largest feline welfare charity. They tell you that if you’re interested in giving a cat a home, to visit Find-a-cat. 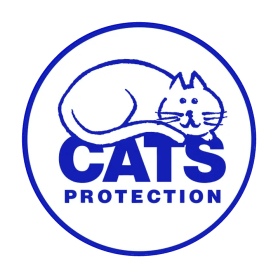 Other cats in the takeover are from the Battersea Dogs & Cats Home. Battersea has over 150 years’ experience and expertise rehoming dogs and cats. Since it was founded in 1860 the Home has rescued, reunited and rehomed over 3.1 million dogs and cats. Centers are located in Battersea, London, Old Windsor, Berkshire and Brands Hatch, Kent. These are noble pursuits and good causes, so why be ashamed of ‘advertising’ them? Why make it hard for people to find out how they can help? Seems like a missed opportunity to me.

Lastly I’d like to defend those of us in the business of advertising who create clever marketing stunts and guerilla campaigns precisely to inspire people to think differently around the world. That is often the objective.

images and information courtesy of Glimpse and Catsnotads.com