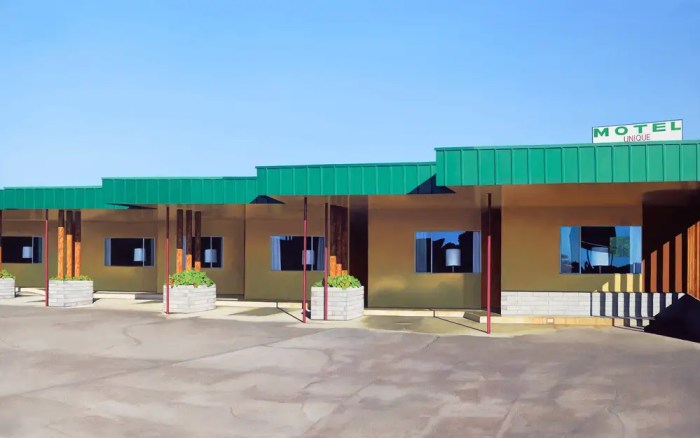 I was immediately drawn to the work of painter Terry Leness. Void of human figures, her paintings of suburbia and commercial buildings have an eerie calm. Her stylized realism combines long shadows, vibrant colors and the quiet stillness of an abandoned town.

The architectural and landscape oil paintings by the Seattle-based artist focus on unremarkable residences, old hotels and abandoned motels. Long shadows, deep colors and unfussy execution (the skies are void of clouds, the streets lack trash or blemishes) coupled with clean compositions give them a surreal feeling, despite the realism.

A surreal interpretation of realism, her long shadows and early morning light are reminiscent of Edward Hopper while the color palette brings to mind Wayne Thiebaud.

Mid-century modern architecture enthusiasts will love her paintings of tract houses and ranch homes with their Eichler-like rooftops, car ports and low profiles.

My work is all about sunlight, the play of light on objects, the varying degrees of contrast between light and shadow, and deep, saturated color. Long shadows cast by buildings, window reflections, and pockets of darkness under eaves and in doorways all capture my attention.

I am exploring more, however, than the mere play of light and shadow on architectural form. I am drawn most often to older commercial buildings, early to mid 20th century bungalows squatting amidst tired or overgrown landscaping, dilapidated outbuildings and, everywhere, careworn campers, tottering on blocks, abandoned in fields or parked on the side of the road. Each building, each camper, every eccentric landscaping scheme has a story to ponder.

I believe that we have an unconscious capacity to visually weed out many elements in our environment that displease us or disrupt our sense of beauty and balance. How easy it is to edit out the ubiquitous telephone poles and wires! Yet it is exactly those details that focus my attention most keenly. We are continually assaulted by visual discordance in our increasingly chaotic and over-populated world, and I am not alone in lamenting the lack of cohesion and creative vision in our attempts to control, sculpt and manage our environment. However, brilliant light, deep shadows, strong color and repetitive forms and patterns never fail to lend interest to even the most ordinary subjects and are the very elements that best describe and define my work.

See more of her fabulous art at her site.

You can find some of Terry’s work at The Skidmore Contemporary Art Gallery and the G Gibson Gallery.

Easter Eye Candy. Art and Pics of Peeps, Bunnies and Modern Versions of The Last Supper.