you are here: if it's hip, it's here » special edition rugs 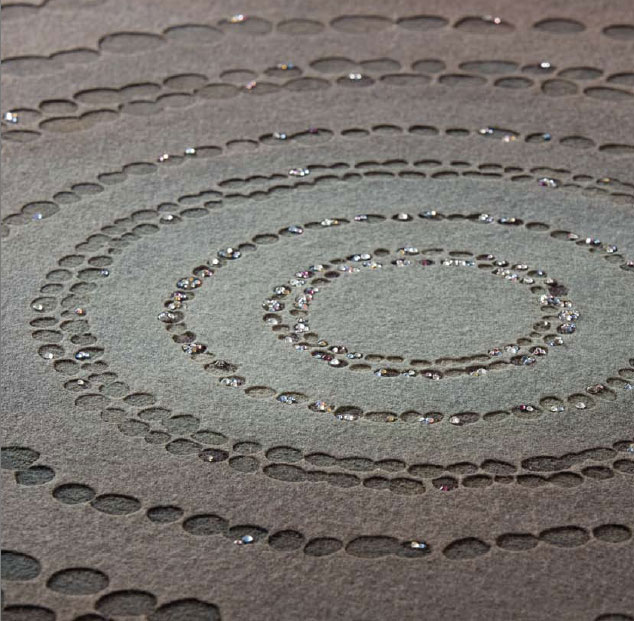 Nine designers from Europe and Canada designed twelve out-of-the-ordinary limited edition carpets for Ruckstuhl. The constraints imposed by larger production runs were simply ignored in order to create an exquisite selection of artworks for the floor which bear the distinct signatures of their designers. 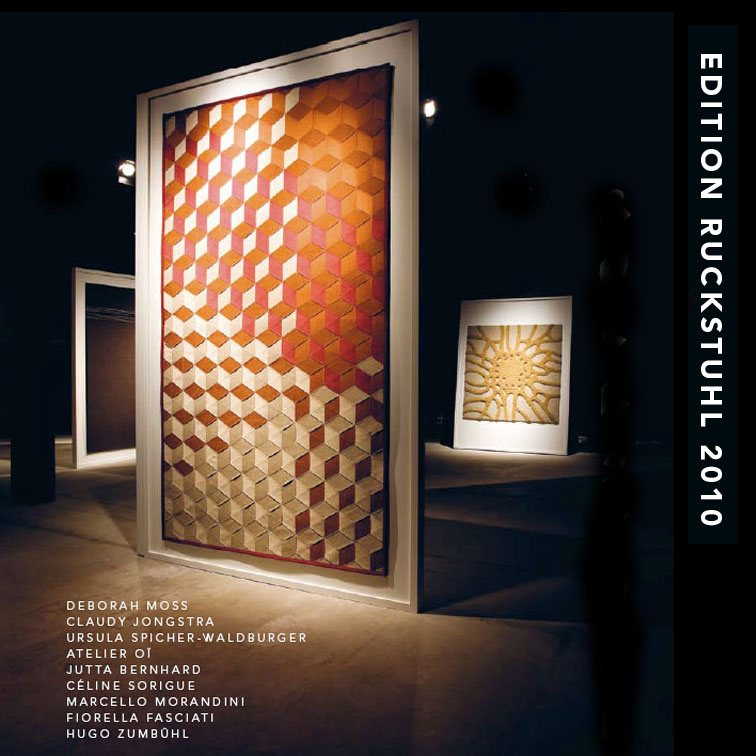 The area rugs, designed for residential use, incorporate unusual materials such as crystals, resin, and strips of linen. Various wools – tufted, felted and embroidered – are utilized in some of the designs and each functional piece of art is signed by the designer. 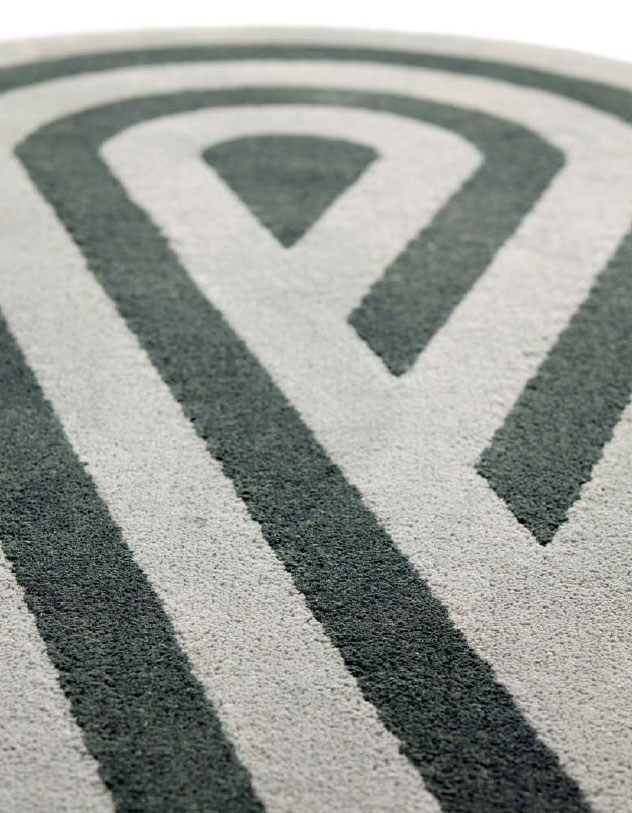 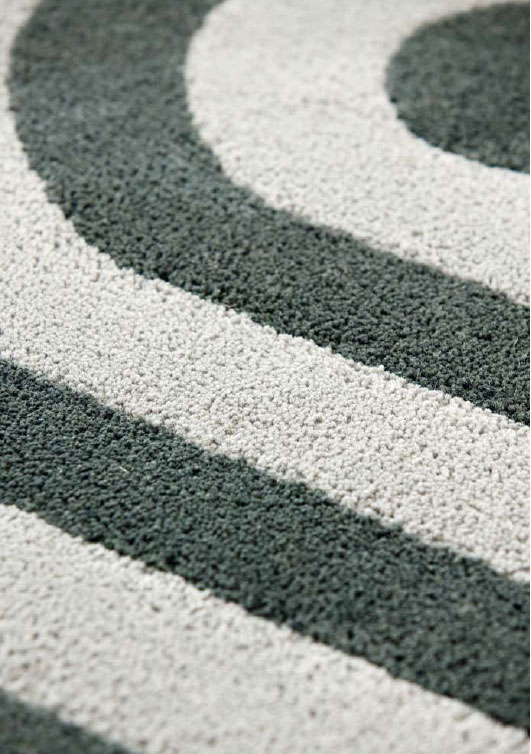 Carpe Diem, the new carpet designed by Marcello Morandini, is distinguished by its unusual yet clearly delineated format. Two intersecting diagonal bundles of lines inscribed within a square sweep out in a semicircle before returning to the square, diagonal once again. The endless loop thus created takes the form of an elongated figure eight, an expression of controlled dynamism. Here, Morandini’s typical black-and-white contrast has been softened into an interplay of dark grey and light grey. 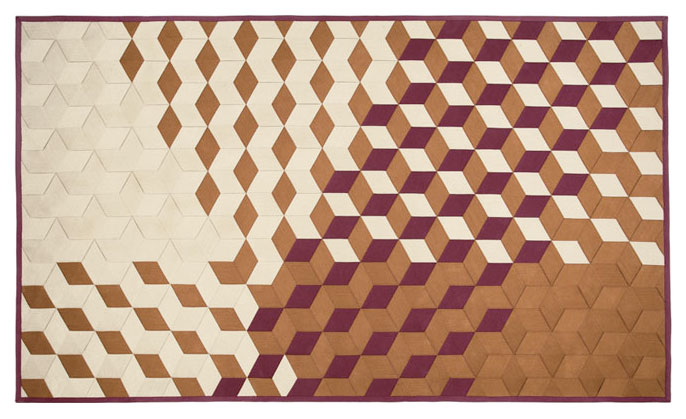 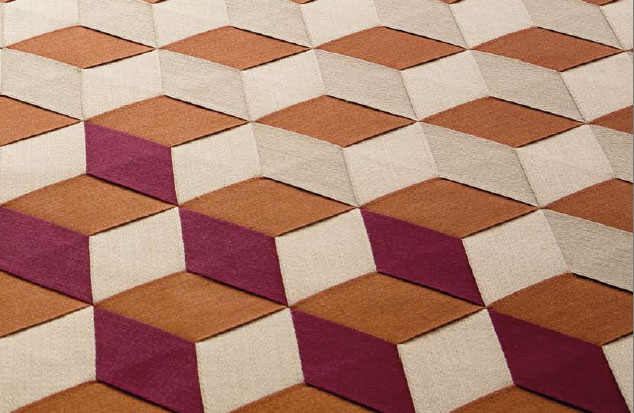 The Dessus Dessus Dessous carpet, which has been woven from strips of linen, can be traced back to a textile installation entitled “Plier – Entrelacer – Superposer” (Fold – Weave – Overlap) which Atelier Oï created for Designers Saturday 2008 in Langenthal at the invitation of Peter Ruckstuhl. The starting material for this work, which was nominated for the Design Preis Schweiz 2009 award, was provided by the strips of linen that are normally used for the carpet trim. The transformation from an experimental exhibition installation to a product for Edition required both the refinement of technical aspects and an upgrading of the graphic design. 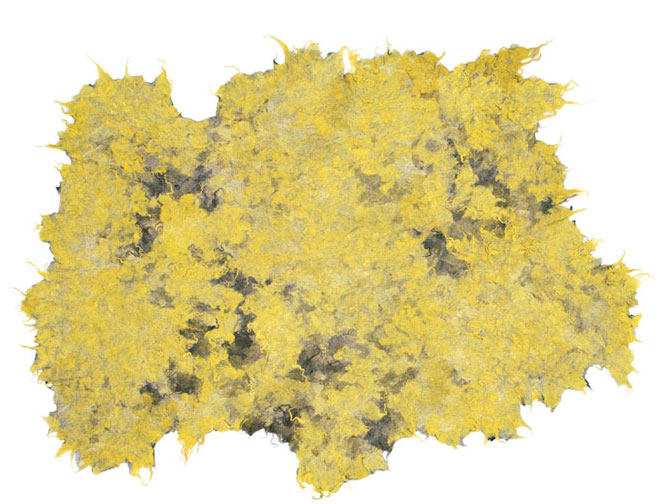 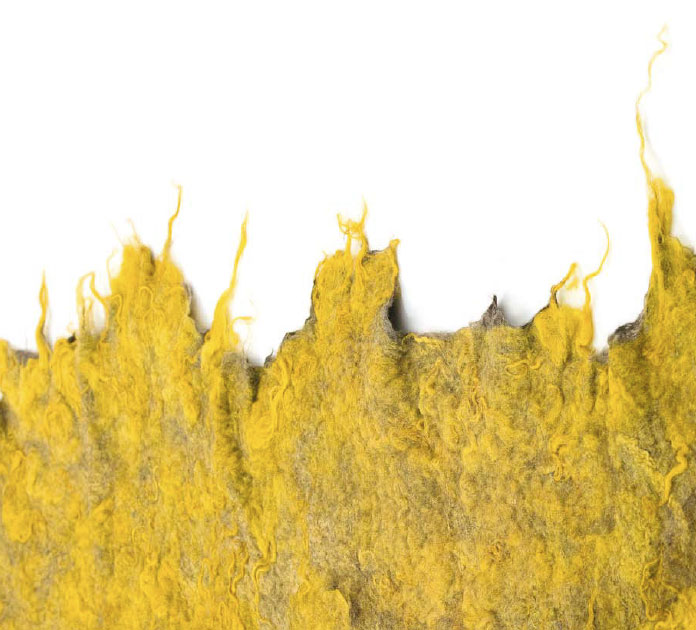 Frisian Wouw, the felt carpet which Claudy Jongstra designed as part of Edition Ruckstuhl, is distinguished in particular by its irregular contours and wild, frenzied texture. This can be seen as an allusion to the archaic character of felt. It is not an accident that the yellow colour, which gives the carpet an unbelievably warm and cosy aura, evokes associations with the golden age of Dutch painting, when masters such as Rembrandt used pigments from the mignonette (reseda) plant (also known as dyer’s rocket). 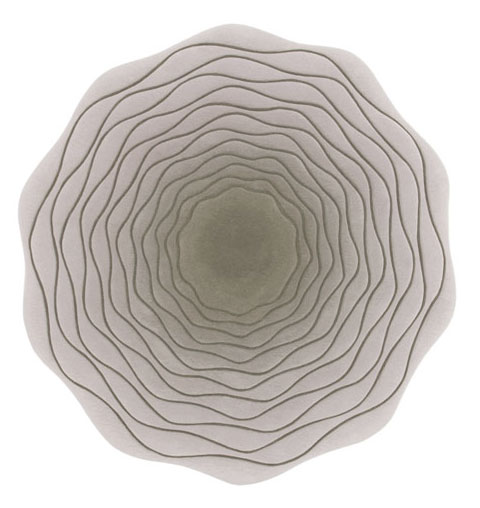 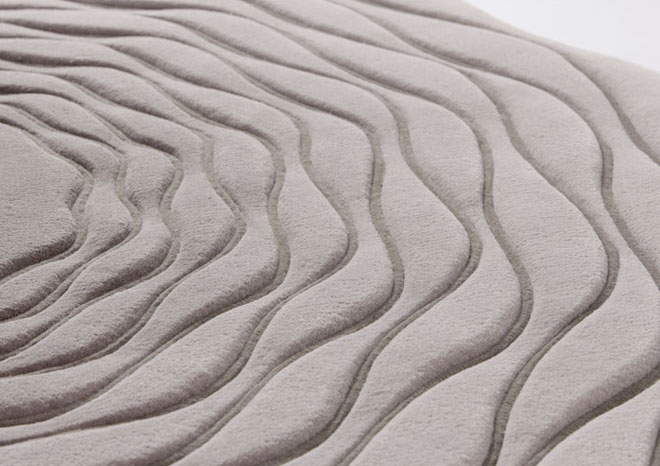 The design of the Hypnos carpet was inspired by “Les Danseuses”, a kinetic installation which Atelier Oï presented in 2009 on the occasion of the grand opening of its new office and workshop building in La Neuveville. Within the circular, ever narrower wavy lines that characterise the carpet’s striking pattern, the installation’s motif of rotating, ornamentally perforated textile umbrellas that instinctively evoked an association with the robes of whirling dervishes has been frozen in place.

Area and Mesh by Fiorella Fasciati (2010) 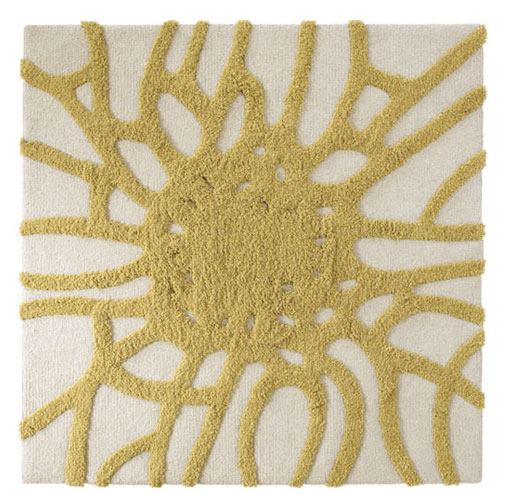 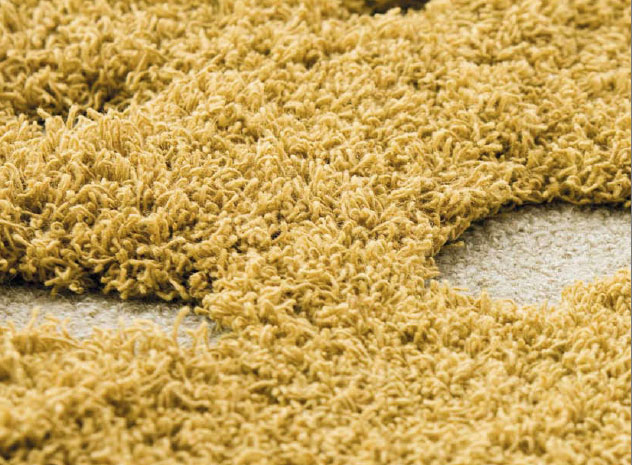 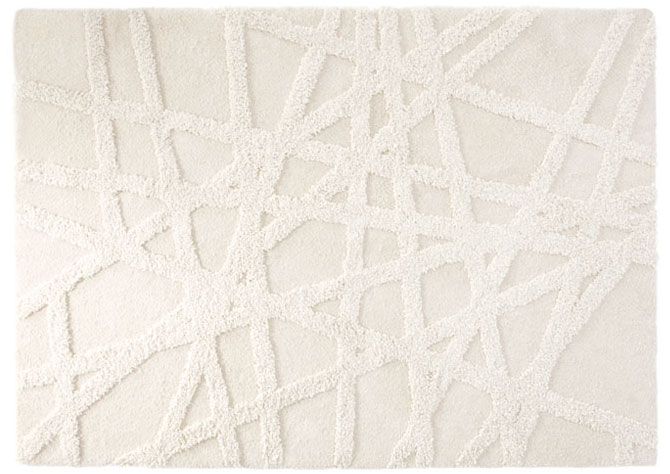 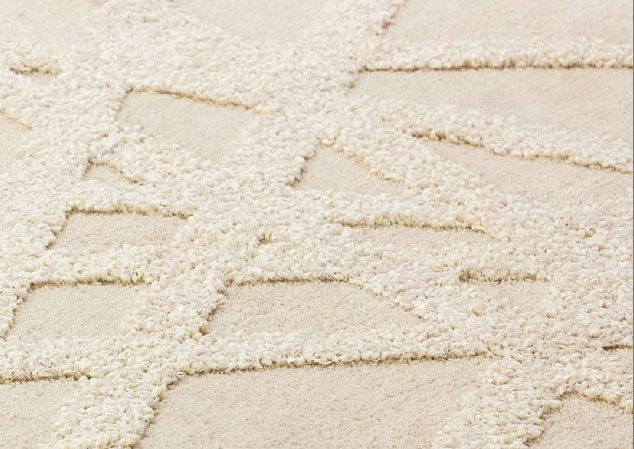 For the Area and Mesh carpets which were created as part of Edition Ruckstuhl, Fiorella Fasciati made a conscious decision to utilise a production technology in common use at the firm and to explore it to an entirely new manner. With the selection of hand tufting, the carpet’s structure became an obvious choice for the central design theme which, characterised by its interplay of inclusion and exclusion, cannot be perceived in the visual realm alone. This is because the pattern is produced in large part by the use of tufts of varying lengths, lending the carpet a three-dimensional structure and making it a tactile floor experience. 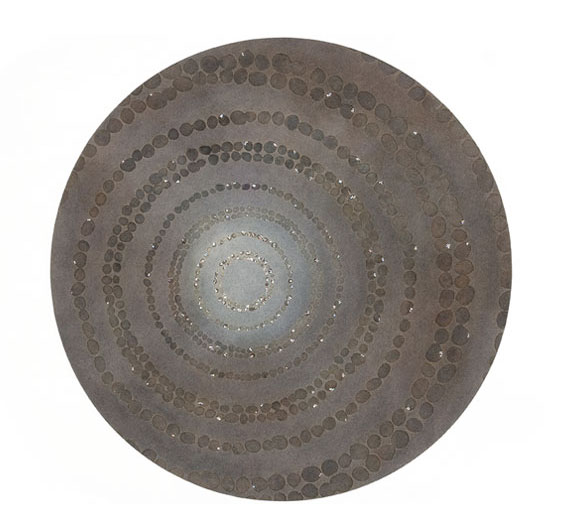 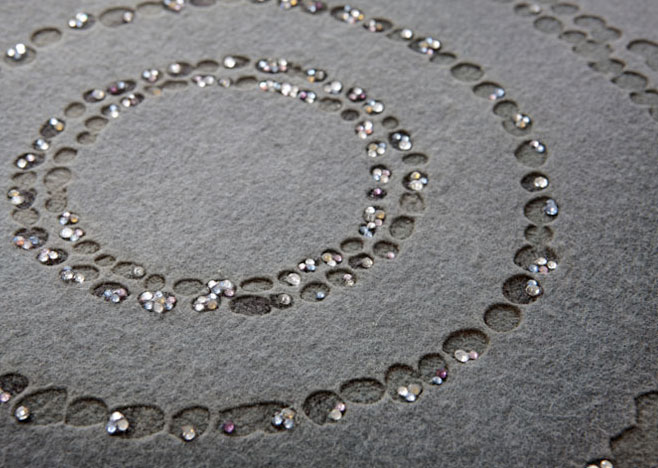 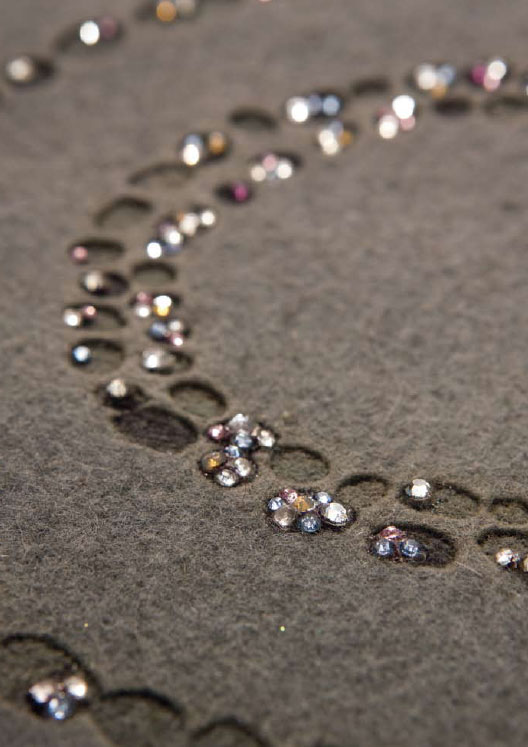 Night Sky, Deborah Moss’s contribution to Edition Ruckstuhl, is by far the smallest carpet in this collection. Its dimensions alone underscore the intimate character of its design, which displays an impressive poetry. The delicate colour gradients on the hand-painted felt depict an authentic image of the infinite expanses of the night sky. Stitched-on crystals create a vibrant contrast to the simplicity of the base material, lending an air of luxury to this carpet. 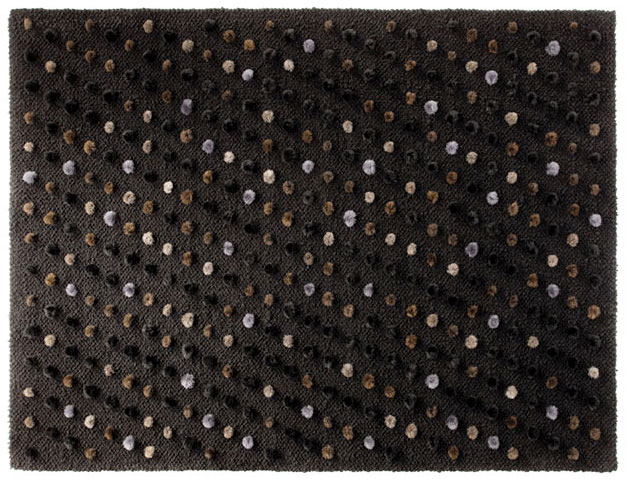 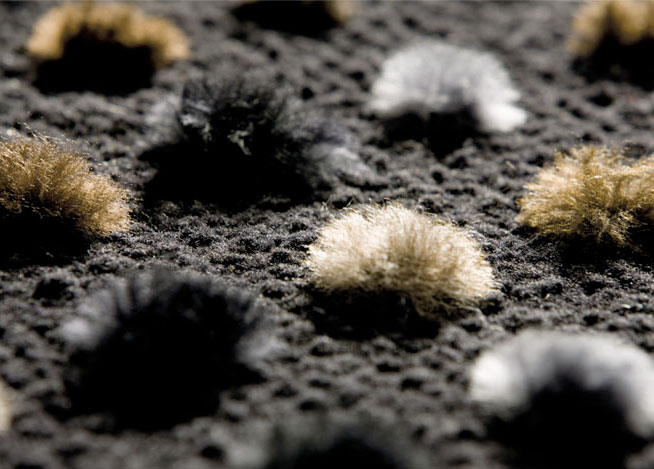 The starting point for Hugo Zumbühl’s contribution to Edition Ruckstuhl was once again a material discovery. The backing fabric for the Pompon carpet with its dense white tuft is made of chenille yarn, a particularly plush wool thread that has practically disappeared from the market. Pompoms stitched in at regular intervals animate the surface structure and provide colourful accents. The result is a spontaneous image of a flowery meadow illuminated only by the light of the moon. 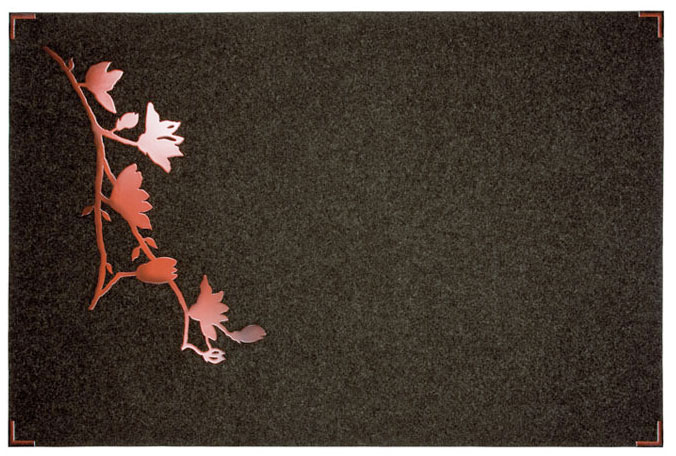 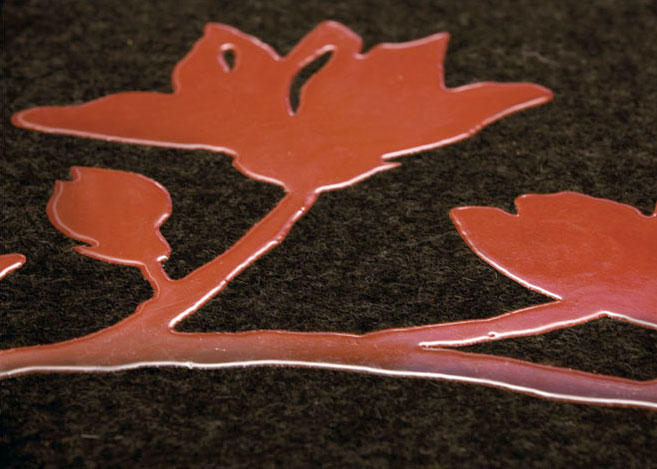 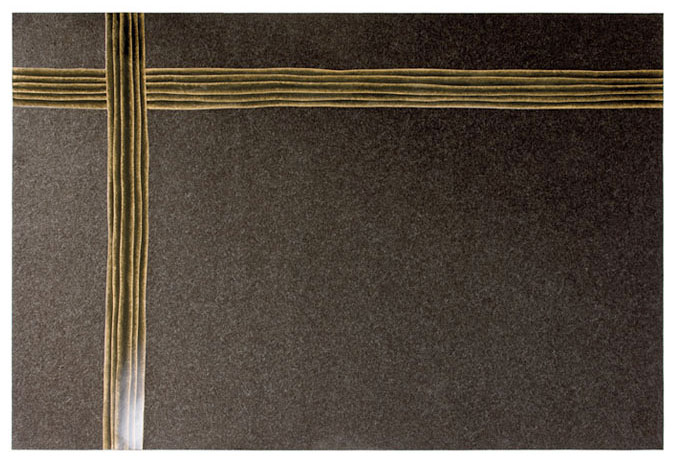 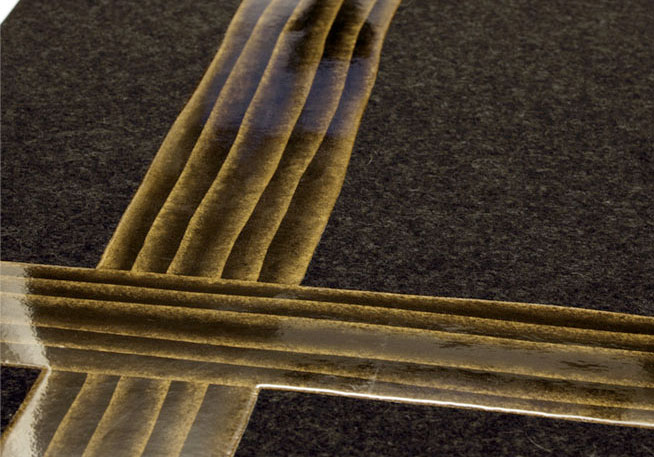 In selecting felt for Céline Sorigue’s Red Flower and Golden Stripes carpets, she has chosen a distinctly simple starting material. As a result, the powerful drawings which she has applied to the felt, and to which she has afforded lasting protection with a coat of transparent synthetic resin, have an even greater impact, making this simple floor covering into a work of art. For Sorigue, the ability to combine traditional craftsmanship with high-tech processes was a significant part of the appeal of producing these designs for Ruckstuhl. The similarities in style to Art Deco and the lacquer work so popular at this time can certainly be seen as an homage to a great epoch in Parisian arts and crafts. 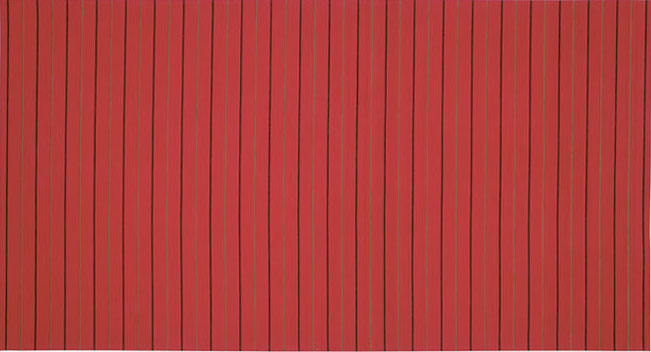 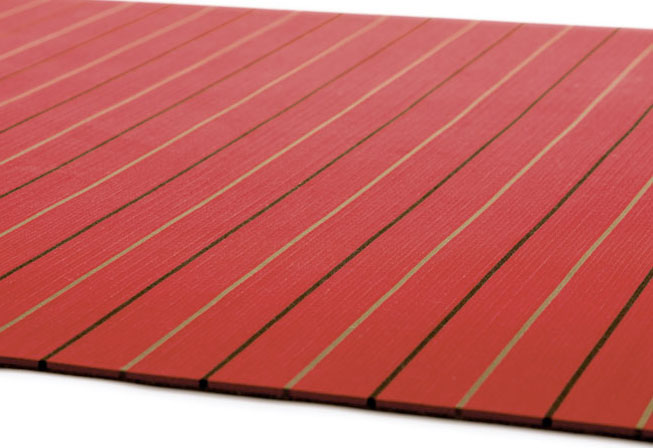 For her Salor carpet, Jutta Bernhard decided to use wool felt – possibly humankind’s oldest textile material. Wool felt represents warmth, protection and security, and has been used to shape rooms for many millennia – one need only think of the yurts used by Asian nomads since time immemorial. Her design was inspired both by traditional Turkmen carpets (specifically their woven edges and primary colour, red) and by abstract art. Her central themes are simplicity, repetition and concentration – typical Ruckstuhl themes if you will – which have been interpreted in an entirely new manner here, underscoring the meditative character of this carpet. Salor is made of strips of felt that have been glued together in such a way that their cut edges comprise the surface. The artist has cleverly capitalised on the fact that the edges of this dyed wool felt exhibit a delicate differentiation of colour, as these variations gently emphasise the striped pattern of the carpet. 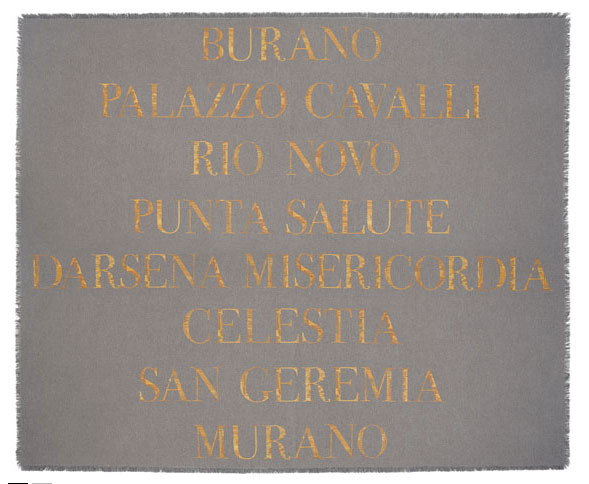 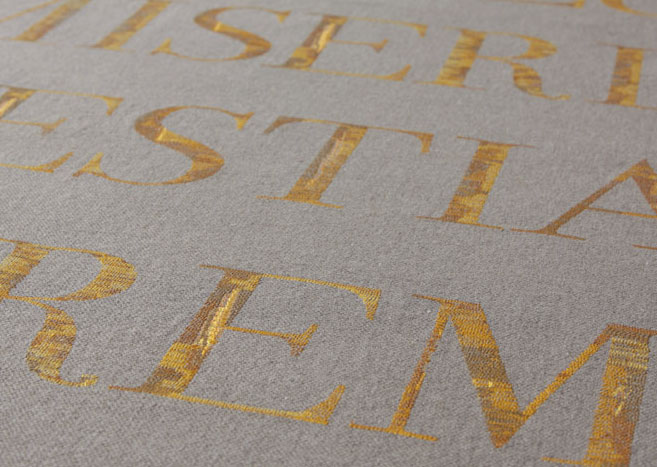 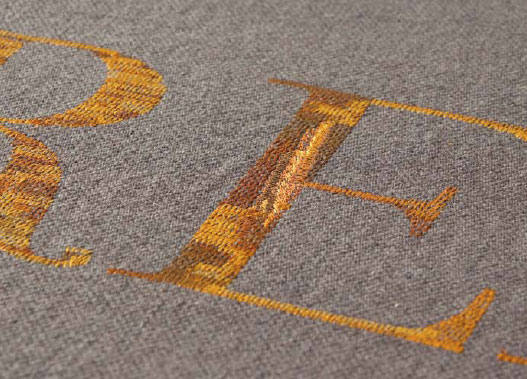 The thematic basis for Ursula Spicher’s design for Edition Ruckstuhl is Venice, or rather the special atmosphere of this historic city which is evident most clearly in its colours. The typographic realisation is immediately clear, leaving room for a multitude of associations. The letters, which have been created using complex embroidery, reveal their many nuances on closer inspection

information and images courtesy of Ruckstuhl