you are here: if it's hip, it's here » Porzellan Manufaktur Nymphenburg

above: original white glazed figurine on left and Gareth Pugh edition on right

To celebrate their 260th anniversary, Porzellen Manufaktur Nymphenberg (Nymphemberg Porcelain manufacturers) invited 16 of the internationally most renowned couturiers to create new “robes” for the 16 Commedia Dell’Arte figures by the rococo sculptor, Franz Anton Bustelli. These figurines, which at the time made Nymphenburg world famous and which to this day count among its most valuable treasures, are being re-issued in a Couture Edition that is limited to 25 copies. END_OF_DOCUMENT_TOKEN_TO_BE_REPLACED 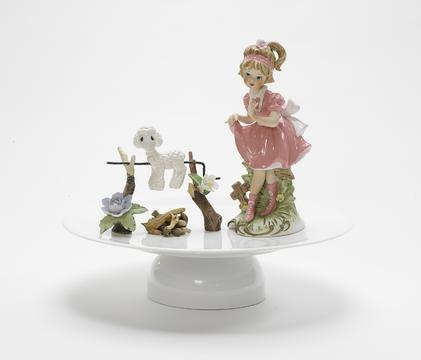 above: Mary Had A Little Lamb by Barnaby Barford

Barnaby Barford is an artist whose produced works you’ve probably seen on blogs, in design magazines and in the hippest of stores. But as an artist, his ceramic work may not be as familiar to you. END_OF_DOCUMENT_TOKEN_TO_BE_REPLACED