you are here: if it's hip, it's here » fashion dolls

Designed by Bill Greening, this frightfully chic creature brings a new level of gothic glamour and haute couture horror to the vampire lore. “We’ve had vampires in the BC line before,” Bill says. “But I wanted to do a version a little more spooky and gothic, something the collectors have been asking for.” END_OF_DOCUMENT_TOKEN_TO_BE_REPLACED

Coach and Mattel have teamed up to introduce Coach Barbie which will be unveiled to the US public on August 7th. END_OF_DOCUMENT_TOKEN_TO_BE_REPLACED 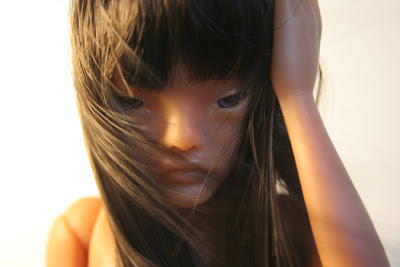 If you don’t know Mooqla dolls, you’re about to be introduced to a series of exotically featured handmade silicone encased plastic dolls clad in the hippest of fashions. They make even Couture Barbie look like some serious *poor white trash. END_OF_DOCUMENT_TOKEN_TO_BE_REPLACED

Most likely the majority of you are not doll shopping. And you probably can’t name the last celebrity doll or action figure you purchased (unless, of course, you have a tween female at home for whom you’ve bought one recently). But before purchasing your next one, be sure to see the Custom Celebrity Dolls by Noel Cruz. END_OF_DOCUMENT_TOKEN_TO_BE_REPLACED