you are here: if it's hip, it's here » American flag

We are so used to seeing the American Flag in its colorful splendor, we can forget that images of Old Glory in black and white can be just as powerful. For this fourth of July, we’ve rounded up some of our favorite black and white photos of the American Flag by such respected photographers as Robert Frank, Lee Friedlander, Garry Winogrand, Elliott Erwitt and many more. And not the photos you’re used to seeing, either. Enjoy END_OF_DOCUMENT_TOKEN_TO_BE_REPLACED

Long before Lynda Carter donned her Wonder Woman uniform complete with patriotic cape, starlets wore the stars and stripes to sell War Bonds and promote movie studios. The flag inspired fashion theme has since continued with celebrities, entertainers, musicians and models. Whether they are wrapped in flags for magazine covers, wearing various versions of patriotism onstage, or donning red, white and blue bathing suits – I’ve got 60 of the best photos of celebs, models and musicians in stars and stripes from the past nine decades for you right here. END_OF_DOCUMENT_TOKEN_TO_BE_REPLACED 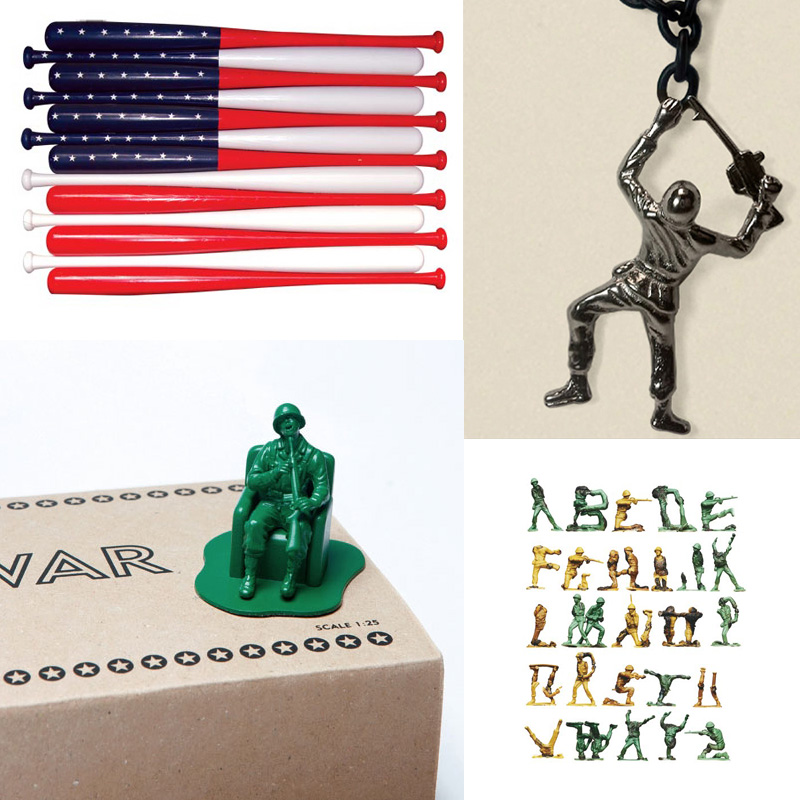 For this Memorial Day Weekend, here’s a selection of various posts related to Military inspired art and design objects and home decor. Each post is an in-depth look at something inspired by those who served, their dedication and bravery. END_OF_DOCUMENT_TOKEN_TO_BE_REPLACED

Most American flag related home furnishings or patriotic furniture are either very country or cutesy in style. But here’s a selection of nicely made, well designed furniture with the Stars and Stripes motif from various designers and companies, all of which are available for purchase. END_OF_DOCUMENT_TOKEN_TO_BE_REPLACED

above: detail from Dave Cole’s American flag made of melted toy soldiers and paint.

In honor of this year’s Fourth of July, I’m sharing with you some artistic interpretations of the United States National Flag. END_OF_DOCUMENT_TOKEN_TO_BE_REPLACED above:American Flag by Dave Cole, made up of thousands of plastic Toy Soldiers and acrylic paint.

In honor of Memorial Day, here’s a collection of modern art and fun furniture, jewelry and home decor that incorporate military related icons such as soldiers, tanks, bombs, missiles and more. END_OF_DOCUMENT_TOKEN_TO_BE_REPLACED