` The Tye River Cabin by Oslon Kundig - If It's Hip, It's Here
Skip to content Only 600 square feet of space makes this more like a permanent tent than a cabin, but the Tye River Cabin is as inviting and beautifully designed as once could imagine. The steel, concrete and wood structure, by one of our favorite and frequently blogged about architects, is situated in a dense forest near the Tye River in Skykomish, Washington and connects to the natural environment that surrounds it. 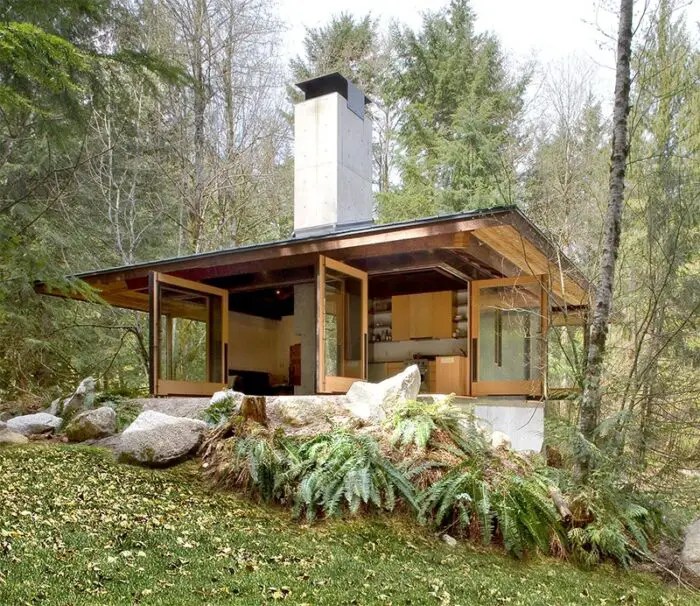 The small cabin is a modern, two-level design with two bedrooms, living room, kitchen and bath which sit upon a square base of cast-in-place concrete. Underneath is laundry room, garage and storage space. 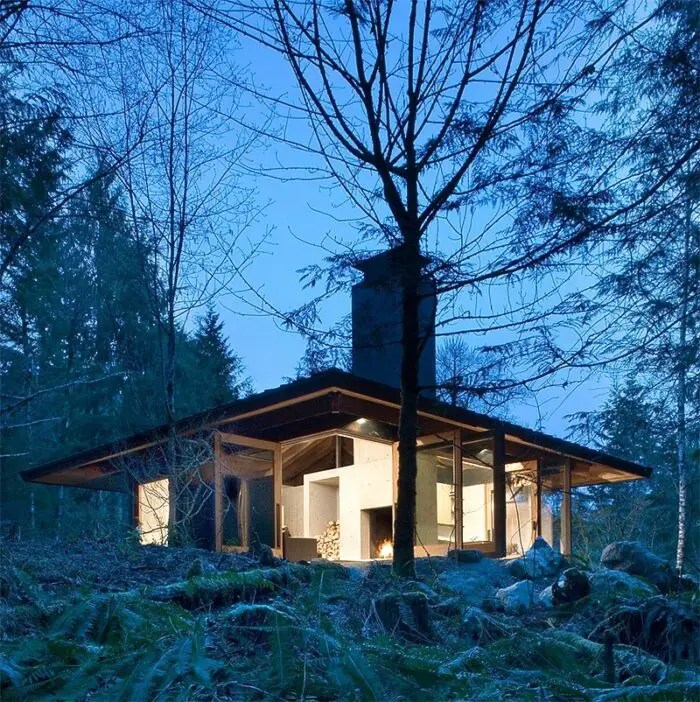 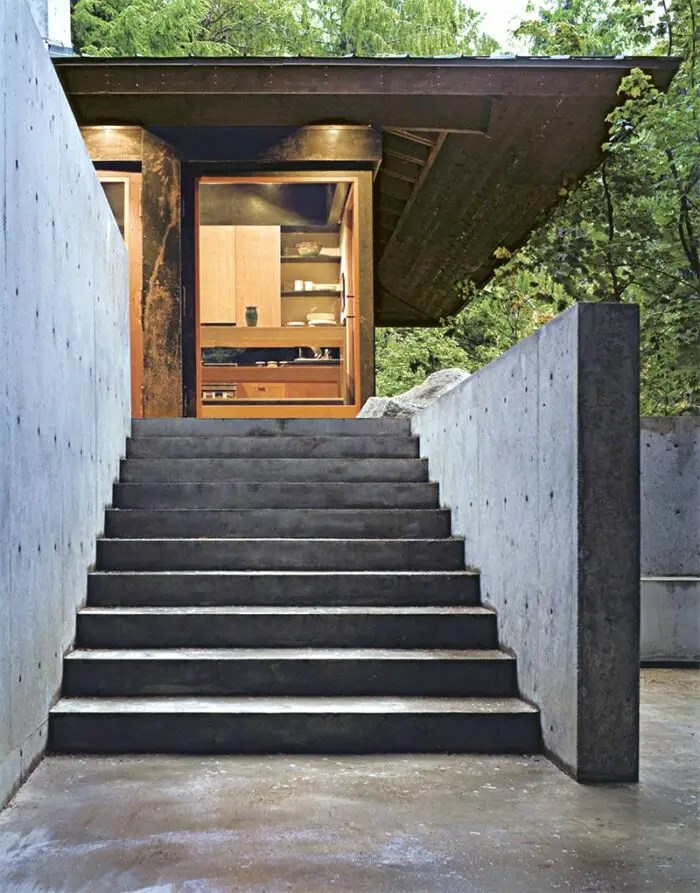 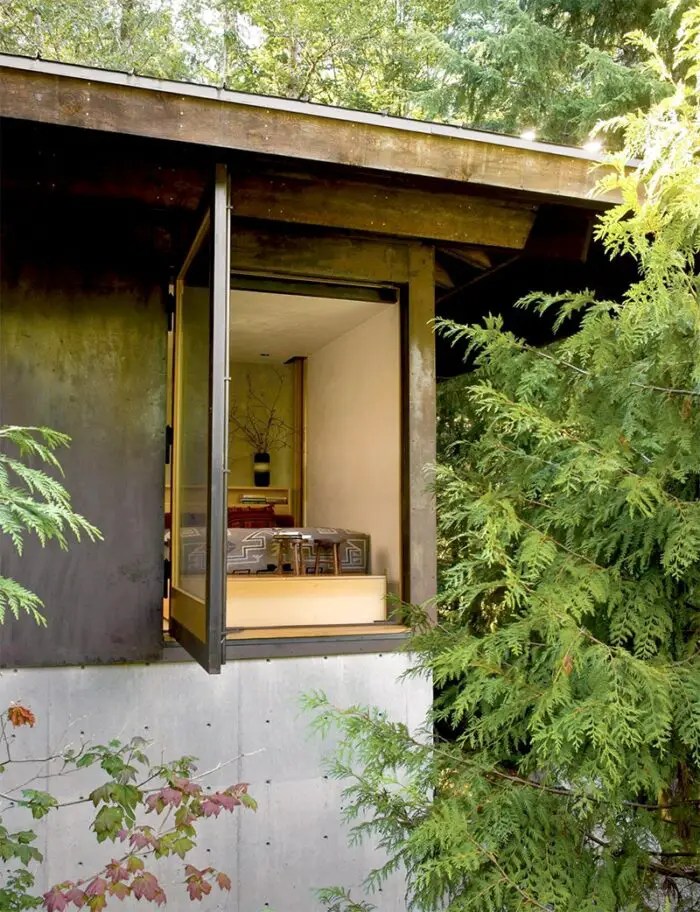 One of the most striking features of the space are the custom-designed, 8′ x 8′ pivoting glass windows that swing open to reveal the corners and sides of the space. 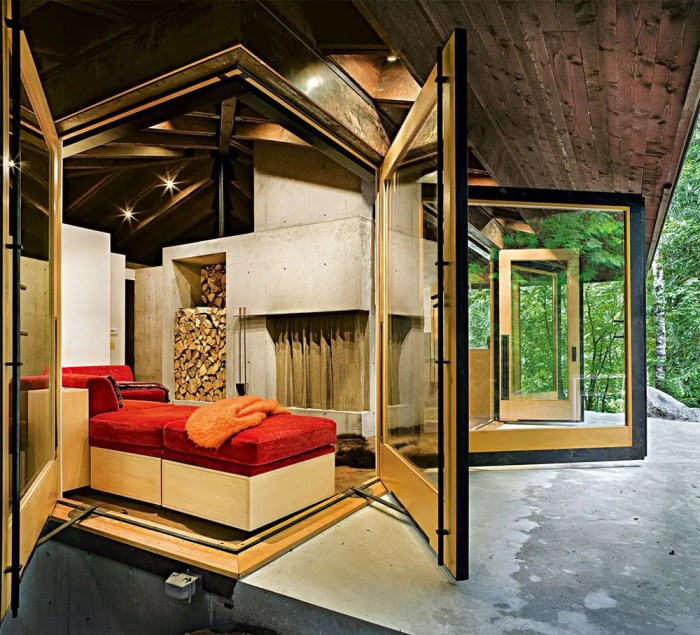 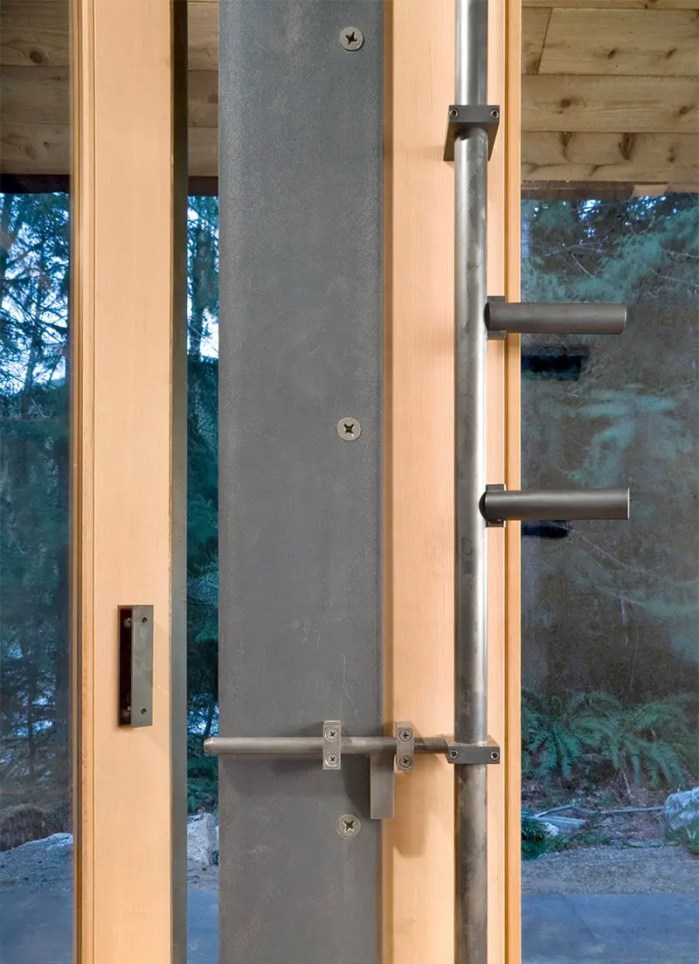 Each bedroom has one of the pivoting glass doors; there are five in the main living area which open the indoors to the surrounding nature. 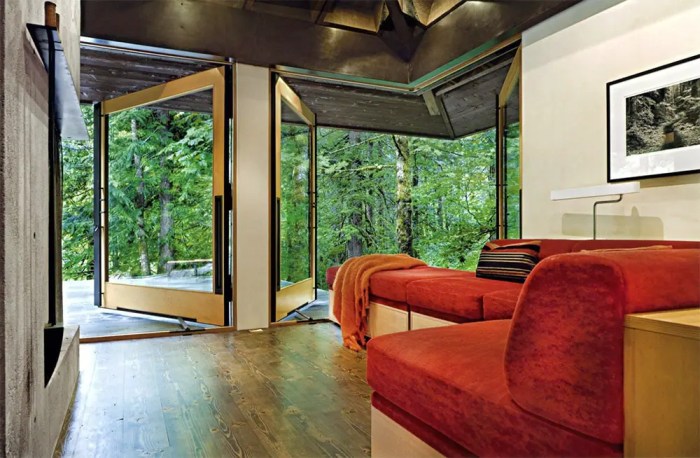 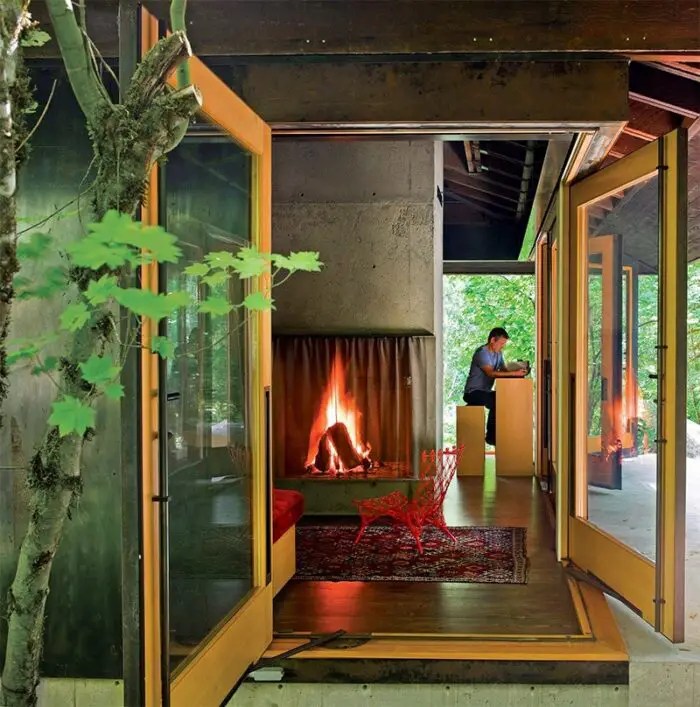 The Kitchen is placed in a corner with pivot doors that open to the outside: 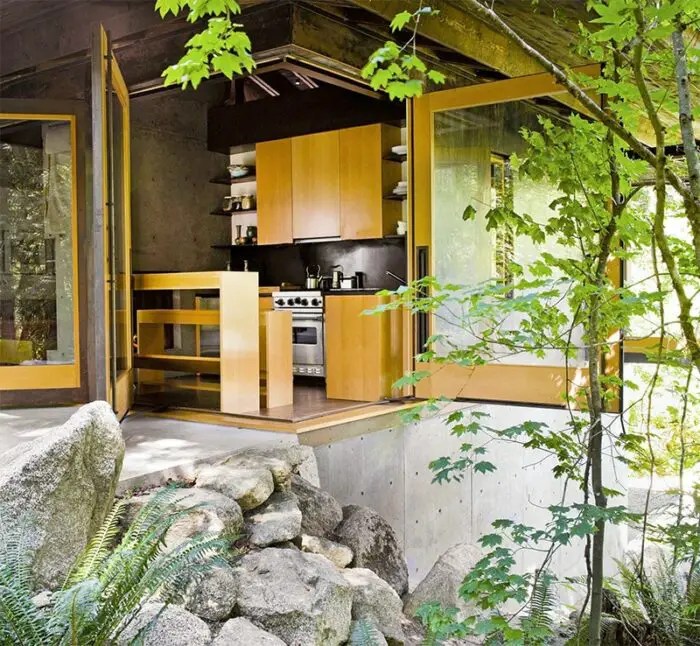 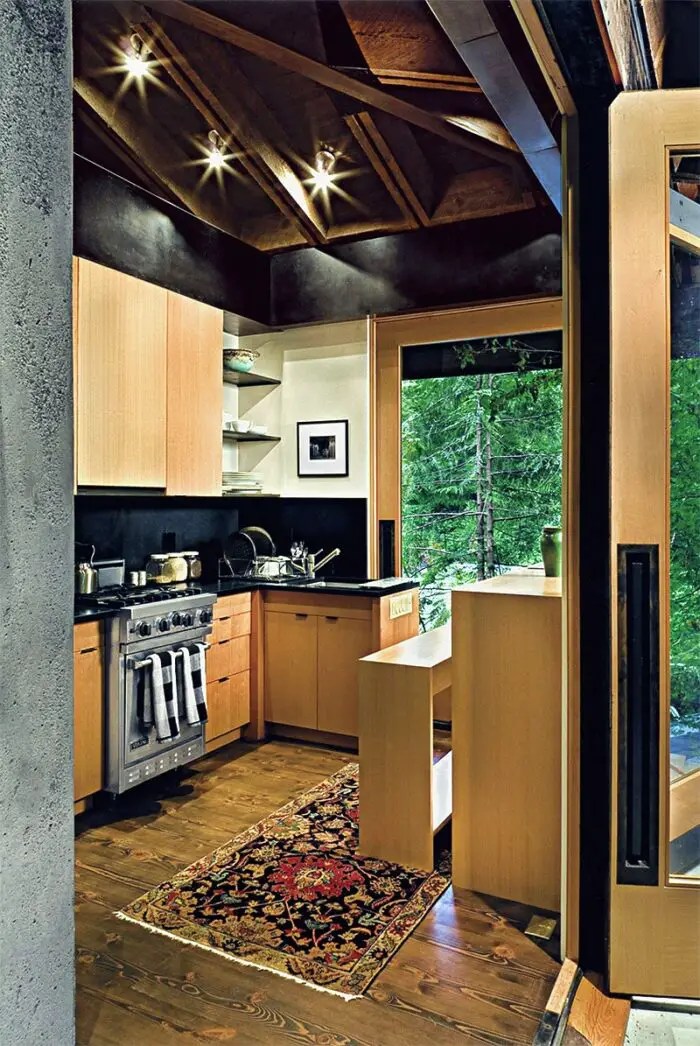 A concrete surrounded fireplace serves as the core and anchor for the cabin. Rusted blackened steel siding wraps the exterior areas not given over to windows. Deep overhangs shelter the main living area from the regular rain showers. The cabin is about being outdoors, not indoors. The two bedrooms and bathroom are just large enough to fulfill their functions. The wood used for construction—for rafters, flooring, window frames, and doors—was salvaged from an old warehouse slated for demolition. The varying tones of the wood reveal its history and use. Over time, the cabin will become more and more muted in appearance, blending in and eventually disappearing into the forest. 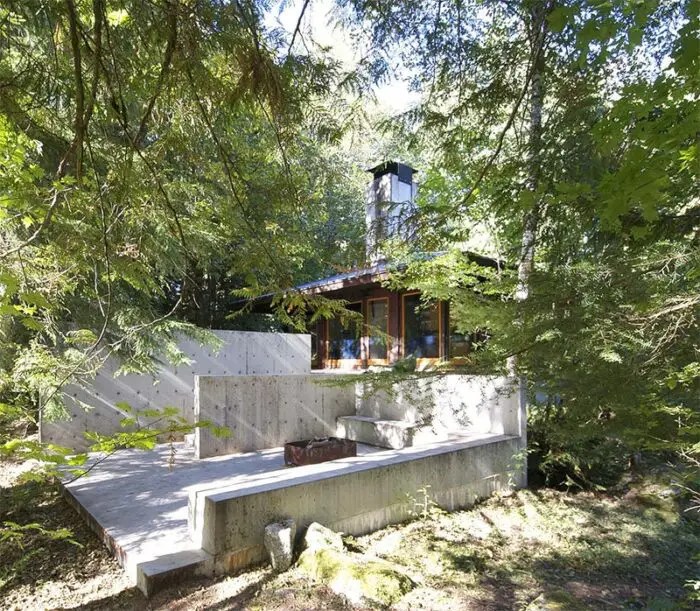 In terms of the landscaping, Alchemie developed a Master Plan to reinforce the connection between the cabin and the bedrock outcrop on which it sits. Concrete patios extend the living space outdoors and follow the contours of the land toward the water. A vehicular arrival court, new entry path, bridge, and front walkway are all woven through a newly developed spring, stream, meadow, and forest complex. By extending the cabin’s architectural language and materials into the forest and around the outcrop, a new terrace system has been developed, providing outdoor living areas, and a link with the river beyond. 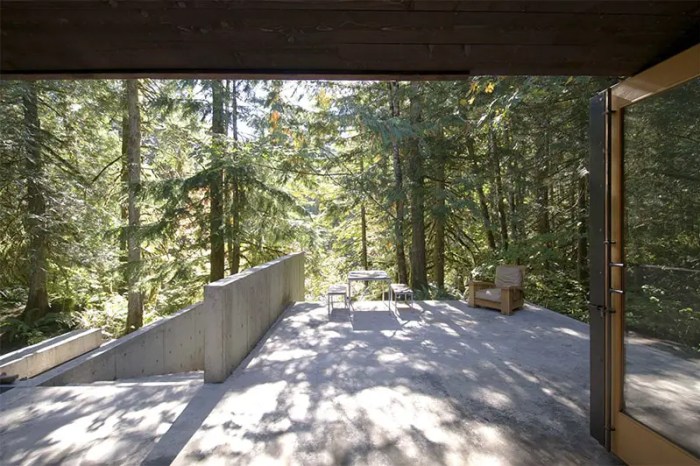