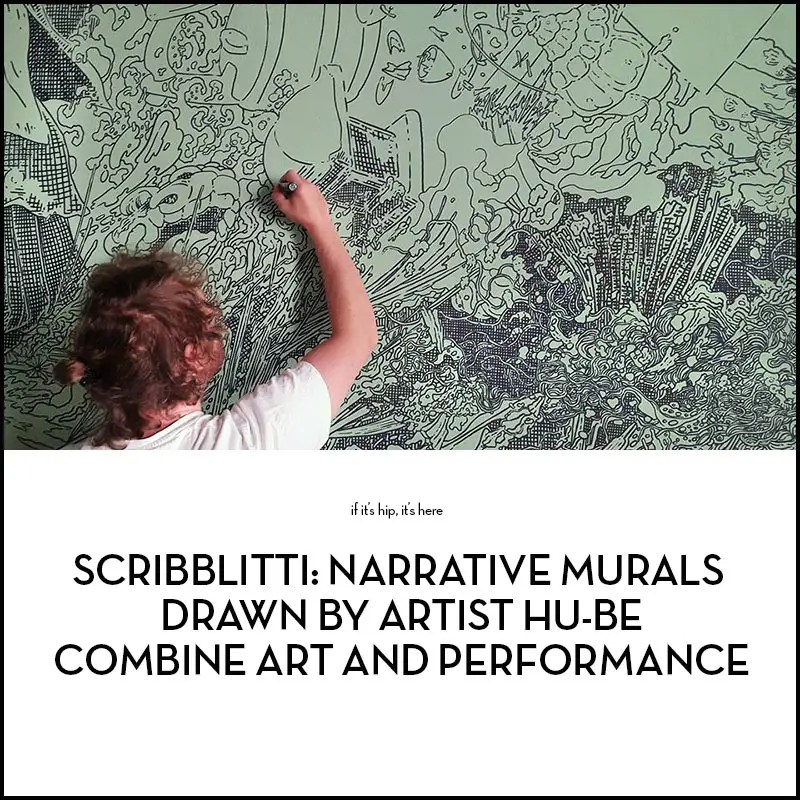 Italian illustrator Emanuele Sferruzza Moszkowicz, aka Hu-Be, has been freehand drawing narrative murals in a project he calls Scribblitti. The ephemeral, itinerant, time-based performance combines human interaction with illustration and consists of a maximum of ten oversized artworks realized in the time span of a single month within a specific city.

The project naturally creates a circuit along which, on a day agreed by all the participants, the spaces are open for a unique opportunity for the public or friends to visit the whole cluster of murals by traveling through the different boroughs of the city. This ends the performance, but not the friendships Hu-Be has made during the process.

Hu-Be’s Scribblitti can be found on walls, ceilings, floors and canvases in various venues such as hotels and restaurants (as well as private residences) in Italy, France and Germany.

For each Scribblitti, Hu-Be first meets with the candidates for breakfast in their house or space, interviewing them about their lives and memories while taking meticulous notes. The dialogue is ignited by coffee while they narrate of their childhoods, tell stories of lost objects or of recent events. Everything is relevant. The landscape described by the patrons becomes the draft of each site-specific Scribblitti.

At work in Munich:

Scribblitti’s renderings of the figures, animals and other subjects are done with monochromatic line art – or as what is often referred to as doodles – but these are no ordinary doodles. Just take a look at these. 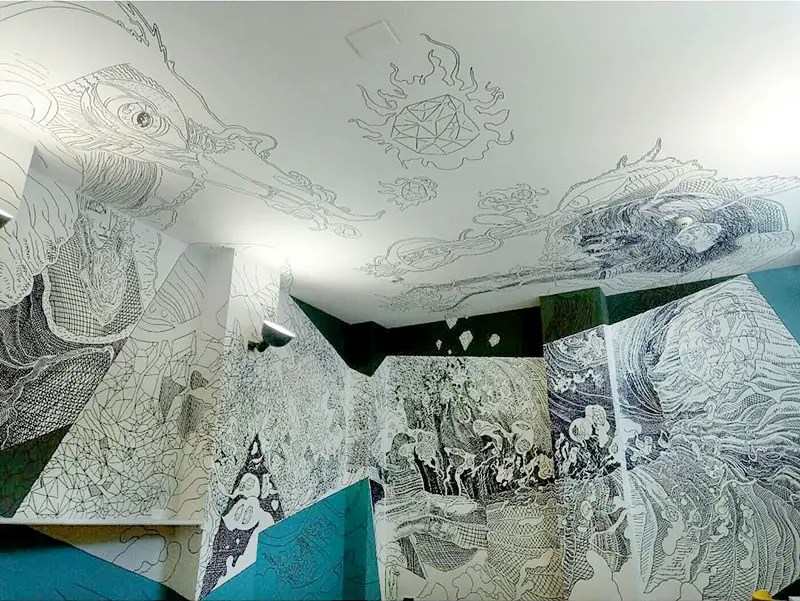 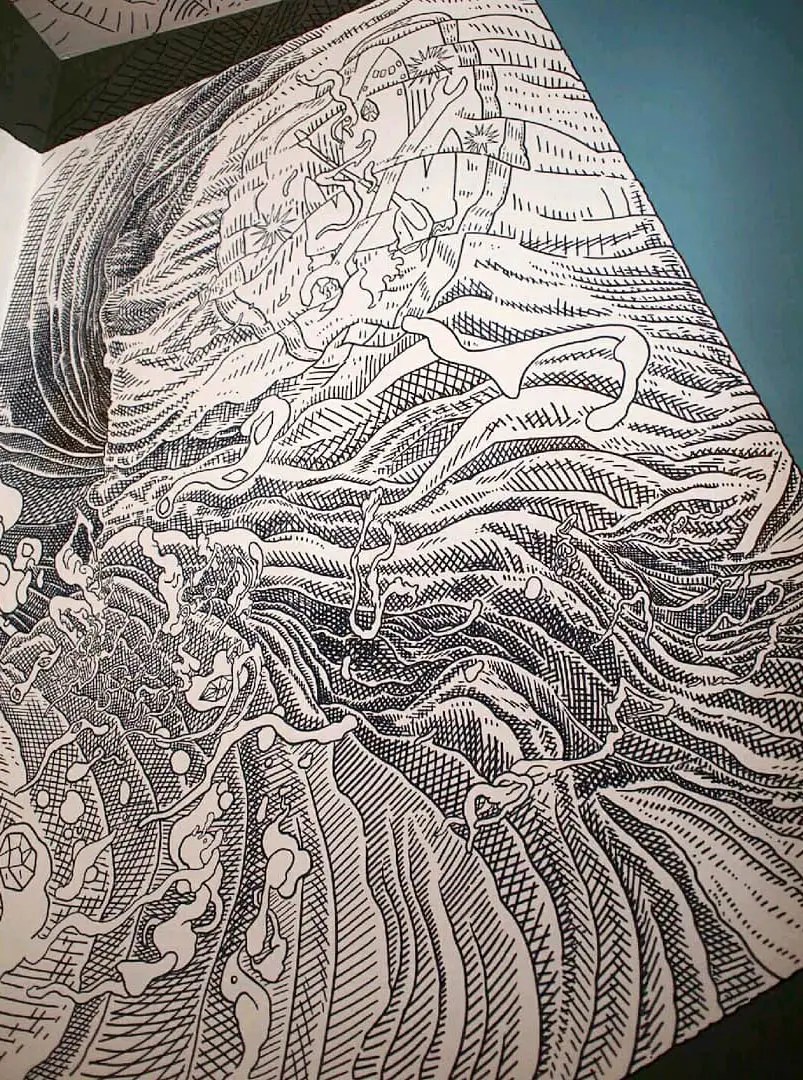 Vulnerability Hiding In Plain Sight:
This monumental wall has been made with the collaboration of the Institut Français de Lettonie and UNHCR, the UN Refugee Agency, for the Sculpture Quadriennal of Riga 2016 along four days during the capital city’s White Night, the
Baltā Nakts. 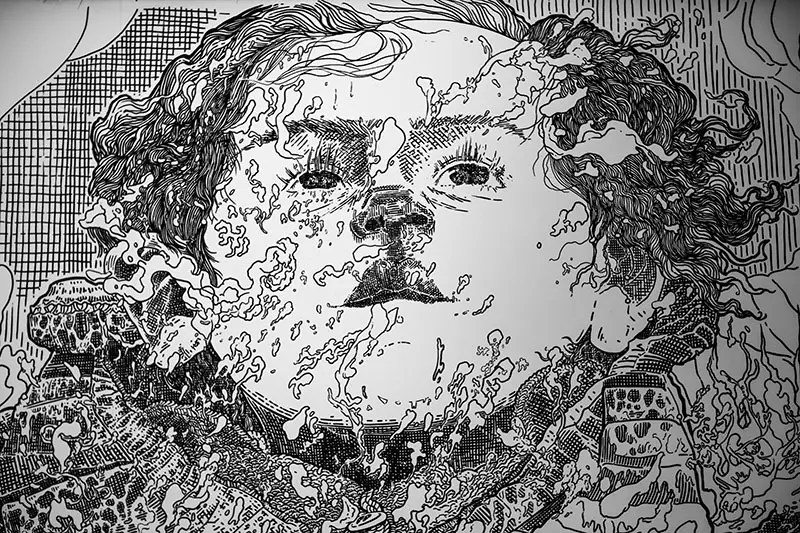 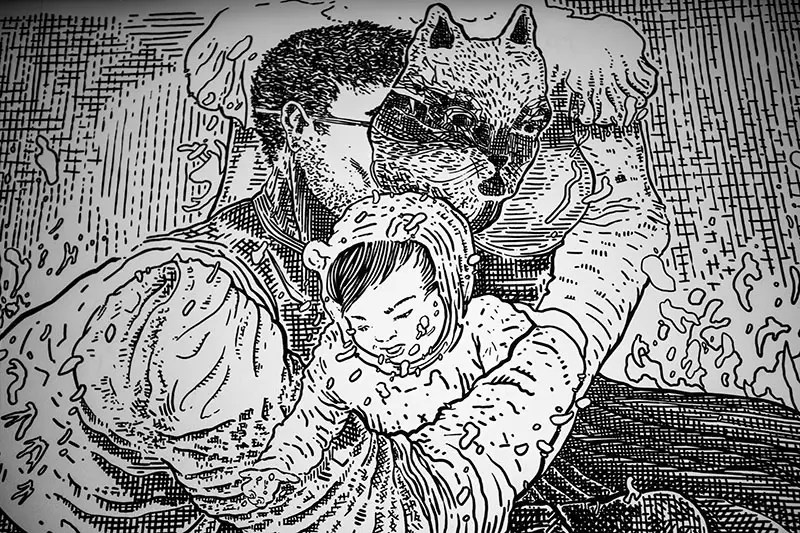 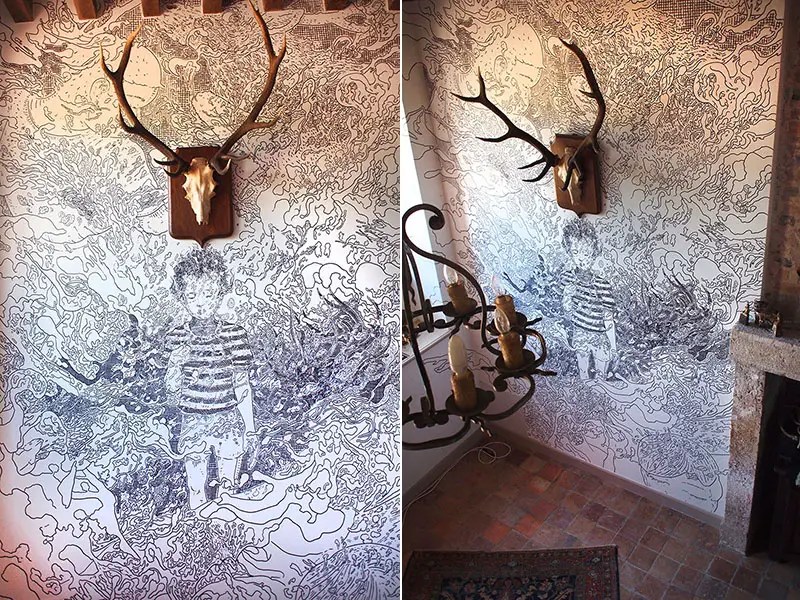 At The Lovelace Hotel in Germany: I am, I was, I will be, the guardian of this land, Moulin d’Arrivay: 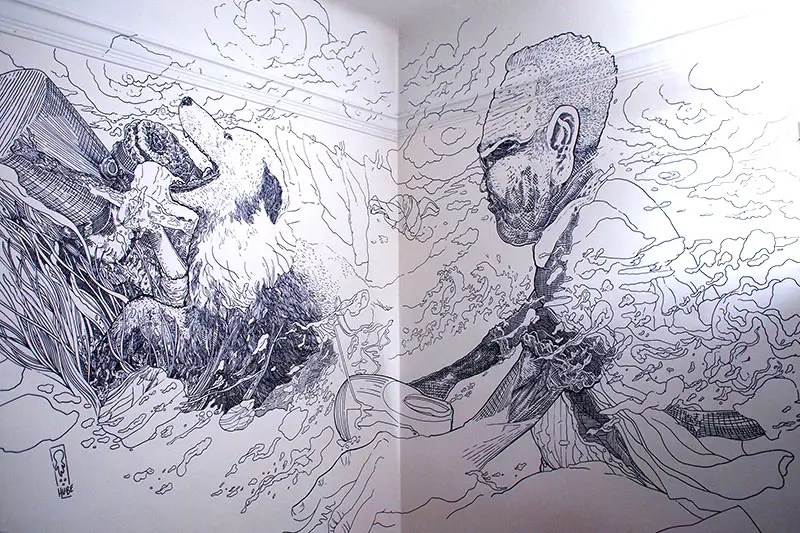 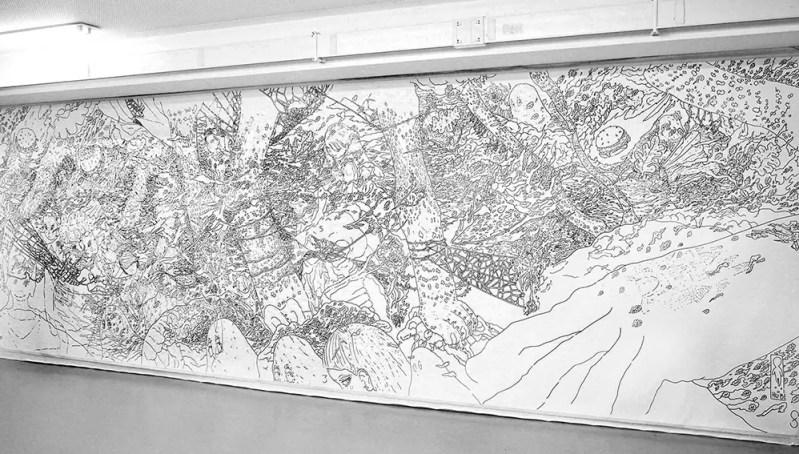 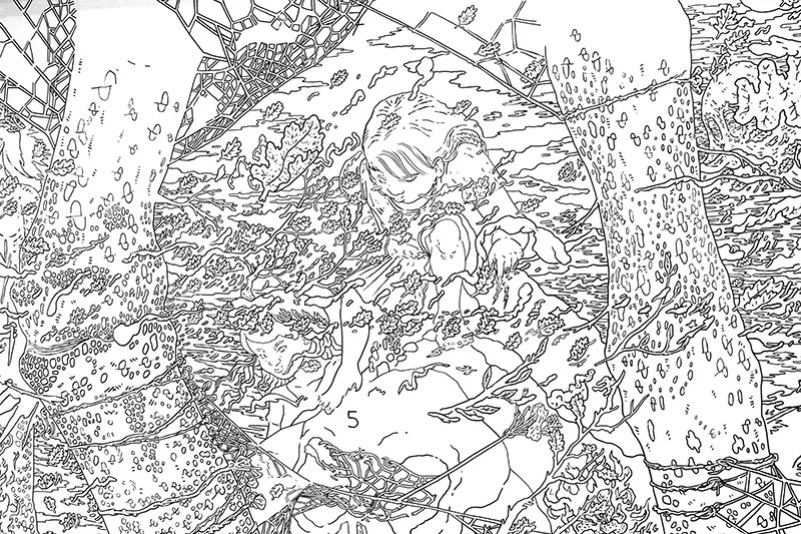 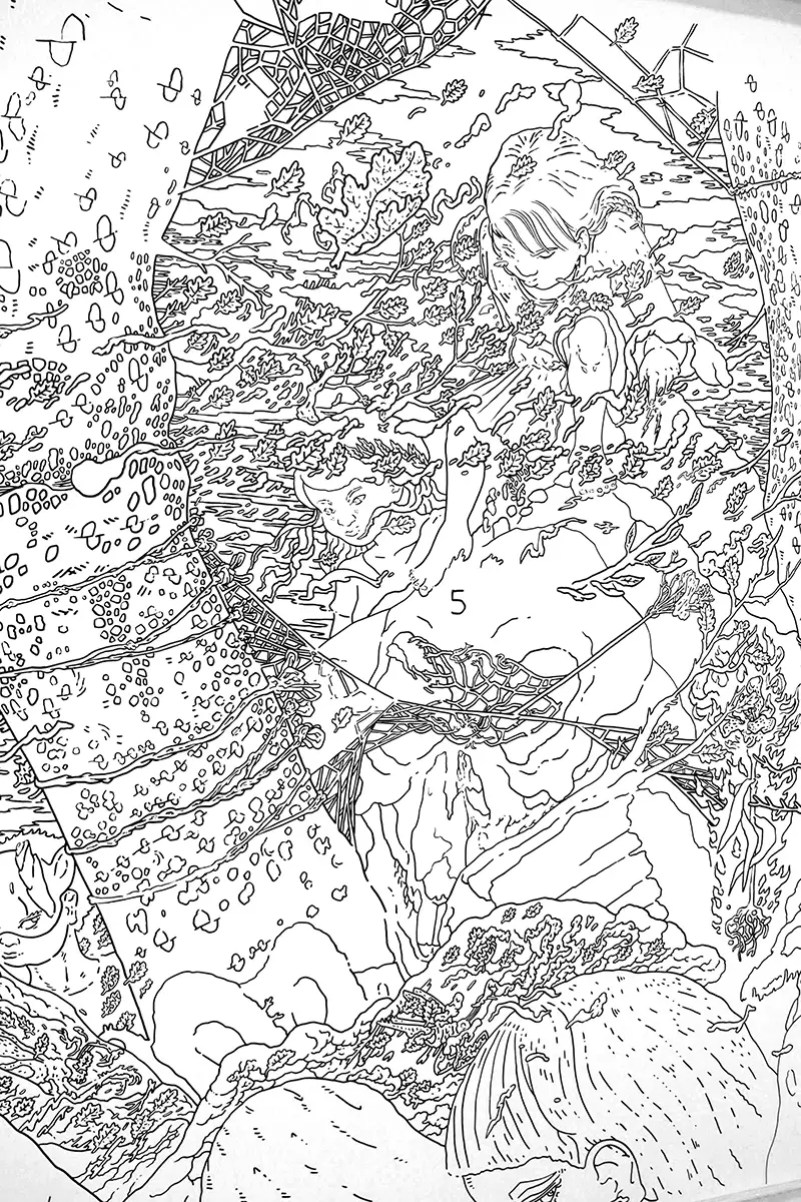 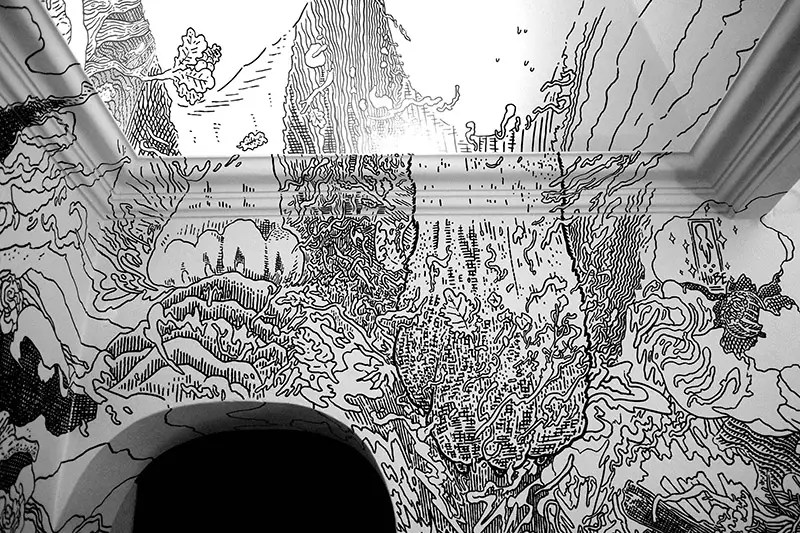 Choral memories of An Earthquake, Gibellina:
In collaboration with AM3 Studio and Mario Cucinella, curator of Arcipelago Italia, the Italian Pavillion of the 2018 Architecture’s Biennale di Venezia. 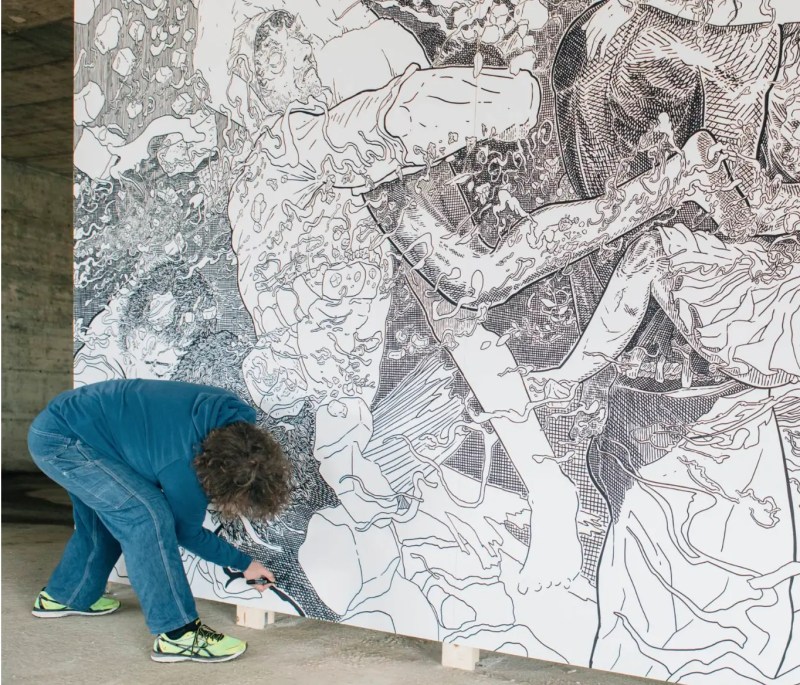 It’s hard to see his large murals here because when reduced, you lose so much detail, so be sure to see lots more images, nice and large, at Hu-Be’s Scribblitti website here.

Simply Spectacular Snow Sculptures – 25 of them!

Two Of My Faves, Bill Murray and Architectural Models – Together!