you are here: if it's hip, it's here » design » Premium Vodka Distillers Drunk With Design

In addition to being touted as having multiple distillation processes or having the least impurities, these companies have hired well-known designers to create gorgeous bottles and packaging..and in the case of U’luvka, glasses and ice buckets as well.

Below are a few of the newest Luxury Vodkas with stunning bottle designs for your perusal.. and possibly imbibing.

1) French Vodka Gold Flakes Supreme, a new ultra-premium vodka with a touch of gold launched across the US this month. 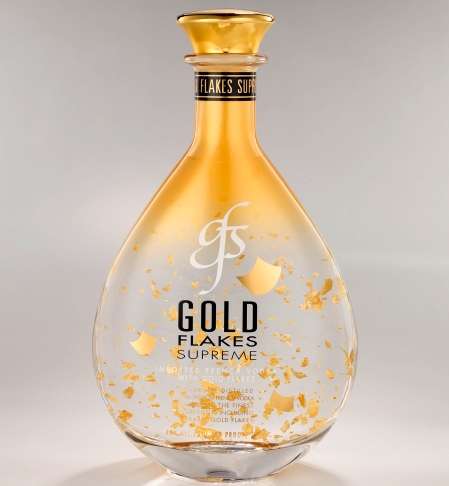 Shaw-Ross is to release the Ultra-premium French Vodka Gold Flakes Supreme – made with 24-carat consumable gold flakes – to certain vodka markets in the country.

The gold vodka is bottled in France and quadruple-distilled. “The shimmering flakes of edible gold that glitter magically in Gold Flakes Supreme’s crafted quality bottle bring to life all of gold’s most desirable associations and expectations,” the company notes. The retail price of the flaked vodka is estimated at €60 (£40) per bottle.

Shaw Ross is currently updating their web site to better serve you. If you have any questions, please email TatianaColumbus@Shaw-Ross.com.

2).What vodka is worthy of the Trump name?

After an exhaustive worldwide search, Drinks Americas is proud to announce the launch of the world’s finest vodka: Trump Super Premium Vodka. UPDATE: after a few years, Donald’s Trump Vodka failed, and has stopped producing. However, seems to be alive and well in Israel. 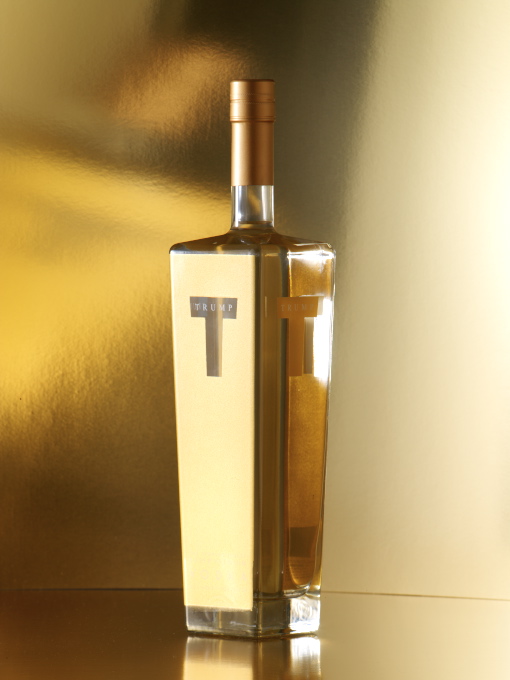 Quintuple-distilled in Holland by renowned Dutch master distiller Jacques de Lat, Trump Super Premium Vodka is the culmination of our search for the distiller and the vodka that will demand the same respect and inspire the same awe as the international legacy and brand of Donald Trump himself.

The Premium Vodka category is where the very best of fashionable spirits brands compete. By the summer of ’06, I fully expect the most called for cocktail in America to be the “T&T” or the “Trump and Tonic.” We are very excited that Drinks Americas will be leading this initiative and look for great success.”

The beverage, Trump 24K Super Premium Vodka, is marketed though a partnership between Drinks Americas and business icon Donald Trump and is currently sold in the United States, Canada and the Caribbean.

As part of the Russian launch of the product, an expected 45,000 consumers in Moscow will be able to view the 24-carat Trump gold bottle and sample the award-winning spirit on November 22nd. Trump 24K Super Premium Vodka has been available on the market since earlier this year, when 1,000 cases of the drink were pre-sold to distributors for holders of luxury accounts and premium clubs.

Recently Trump had added flavored Vodkas to their line: 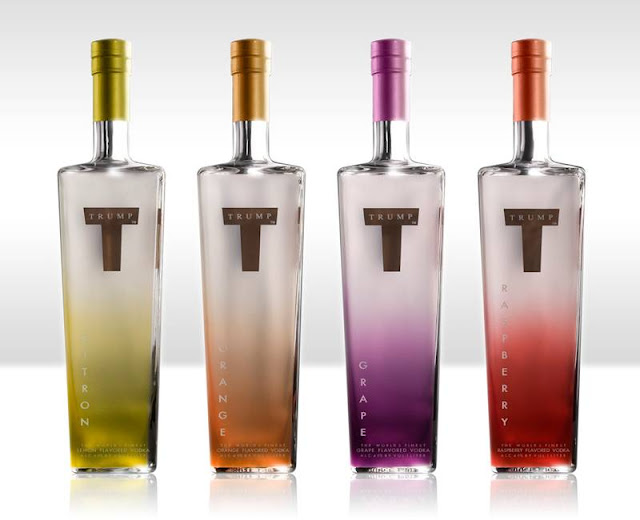 A separate version of the beverage, without the luxury gold label, has been sold in the US since last autumn and up to five new flavors of the product are expected to be announced in the coming months.

Marketed under the catchphrase “Success Distilled”, the vodka is made in Holland.
Buy it here. 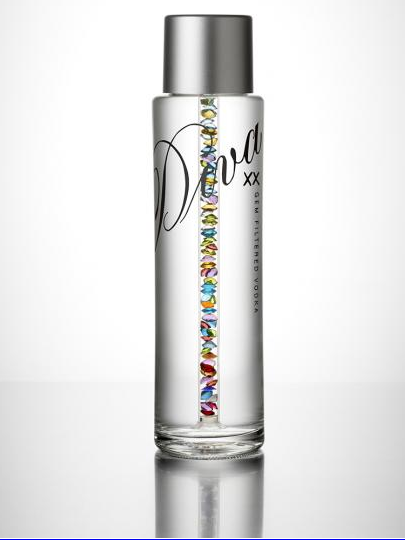 UPDATE: As of 2012, this seems to be yet another brand that is longer being produced.

Diva Vodka seems to be the brainchild of ten people (the Diva Divas) and in addition to creating this ‘gem’ of a bottle, they make many custom (bespoke) versions as well. Their site is filled with quotes and information. The Diva Divas certainly seem like a fun group of people!

The Baltic Vodka is triple distilled and filtered through a fine sand of crushed gems and diamonds.

Some even come with matching jewelry (see rings below next to bottles): 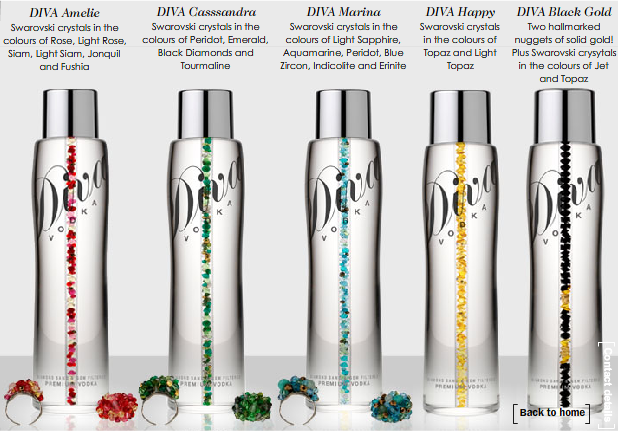 You can get the Vodka with swarovski crystals in any color variation or, even better, with REAL GEMS. Below is an example of DIVA Black Gold which has two nuggets of solid gold in it. 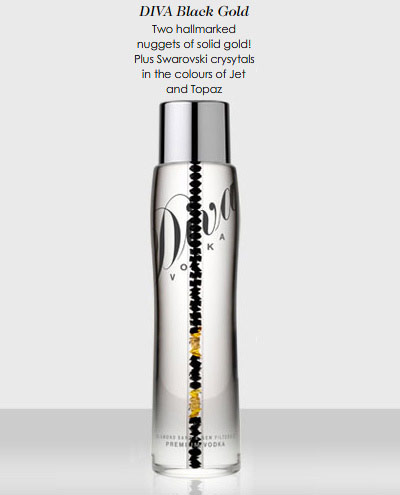 Oval calls their product “structured” vodka. Their purification process and bottle design are related to the chemistry used in their patented filtering process. 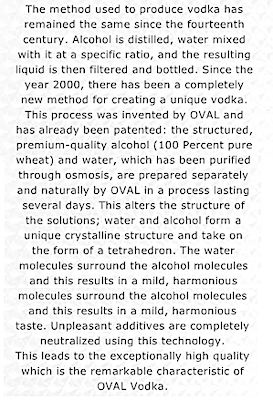 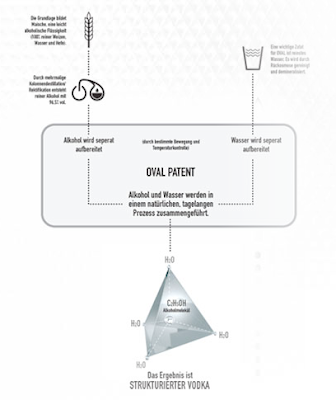 The Tetrahedral -Shaped Bottle was designed by Lucy D. Design Studios and is based on the form of the vodka and its molecules.

above: the vodka molecule and a bottle to match

The Bottle was a Cannes Design award winner this year, 2007. 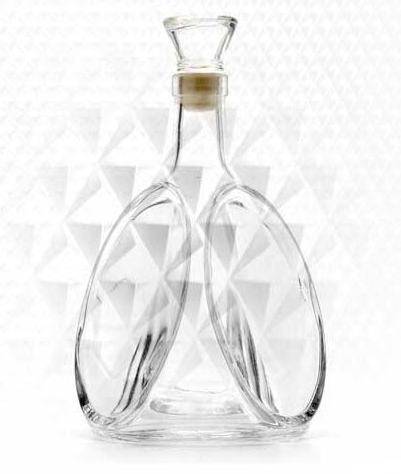 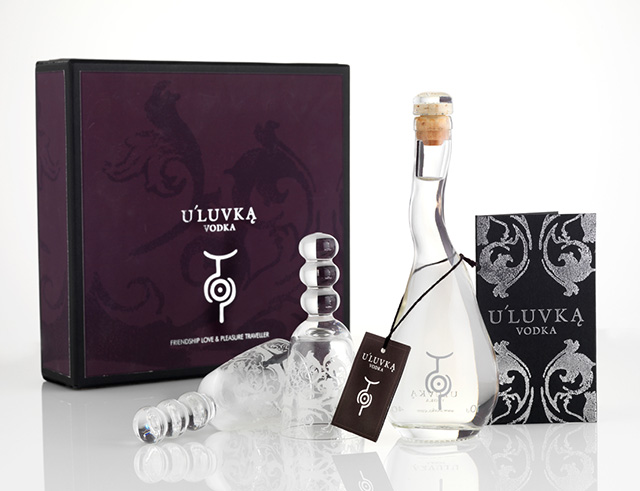 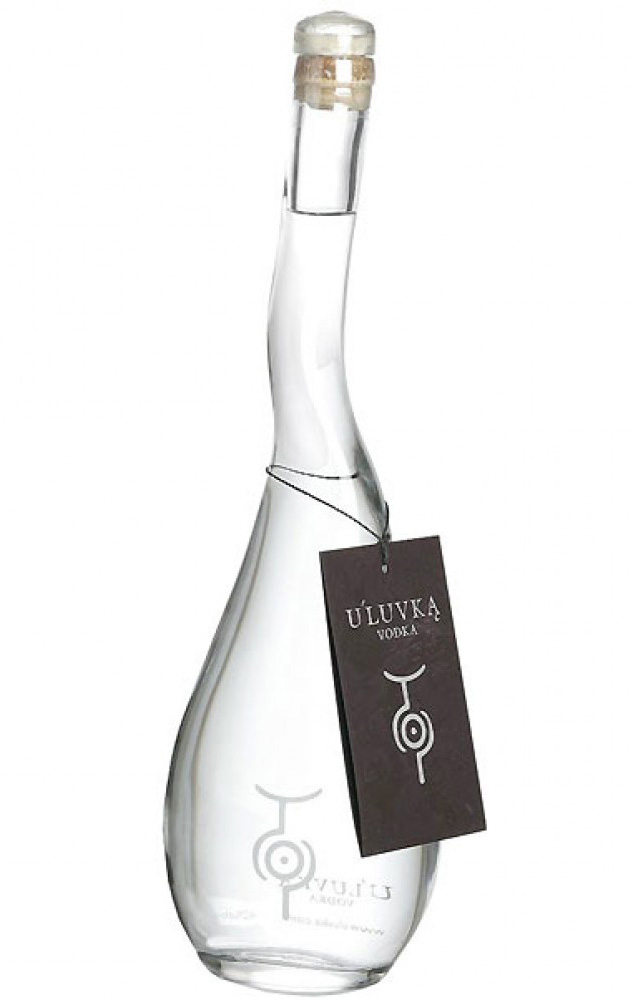 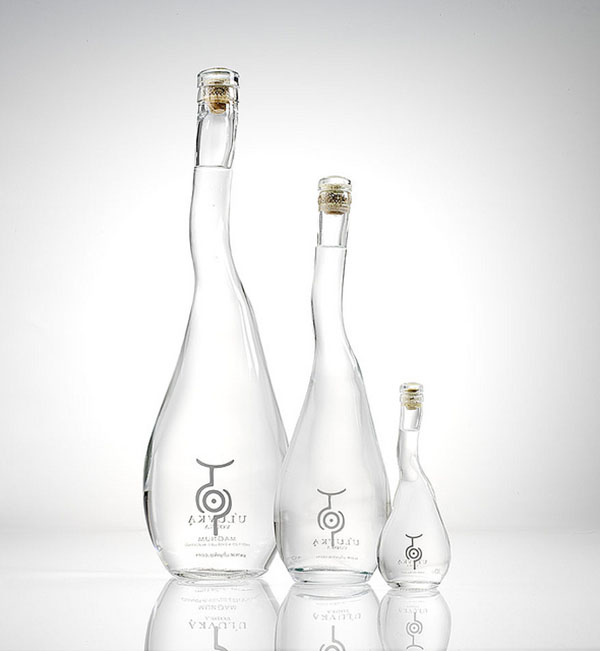 Their site is one any designer should see, even if you’re a teetotaler. 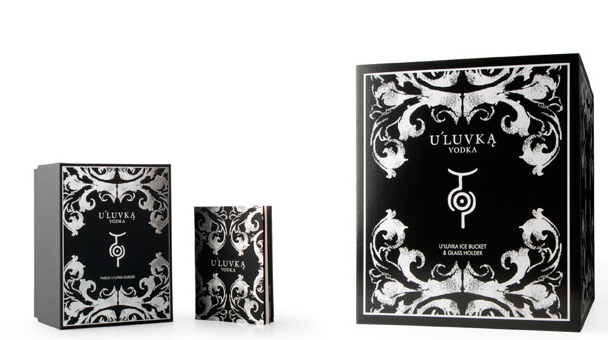 Above: just some of U’Luvka’s stunning package design by Aloof Design 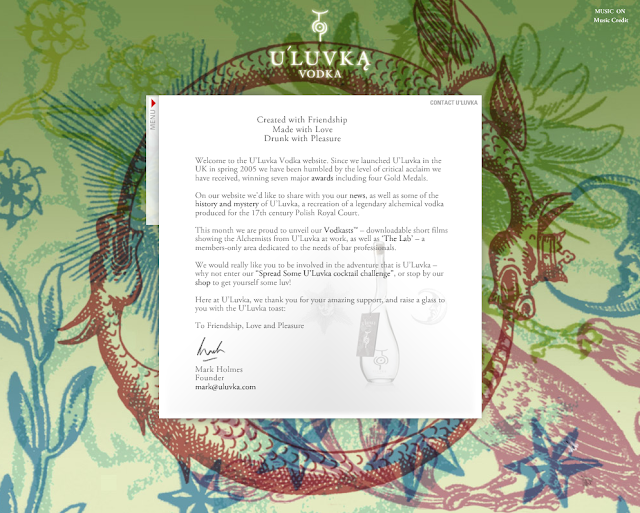 Visit their site.
Or just buy the vodka here.

Many of you design-watchers will recognize this bottle as receiving praise for being the first neckless Vodka bottle. Initially named Vertikal Vodka, I believe they have now renamed it ABNormal. Which is probably why you couldn’t find it on the shelves.

ARTESKA International Company is introducing revolutionary innovations into the technology of vodka production, especially in the process of distillation. Its vodka is produced from the best quality wheat grown in the famous wheat fields of Vojvodina.

The quality of every bottle of ABnormal vodka is guaranteed due to the control of the complete production process; every drop of vodka is filtered for more than eighty hours through ten tons of special active coal. As the result of this process, crystal clear vodka with neutral smell and taste is produced, quality highly appreciated and highlighted by the devotees of this beverage.

ABnormal vodka is the first in the world bottle without the neck. Design of the bottle for ABNORMAL Vodka received get the “GRAND PRIZE – best packaging design” in Cannes 2005.

ABnormal vodka is now launched, finding the way to consumers hearts; recognized as excellent cocktail base, providing the inspiration for creative barmen.

Vertikal Vodka (now renamed as ABNormal Vodka) from Serbia received a lot of attention as well as design awards, with their ‘Neckless” bottle design by Nonobject. 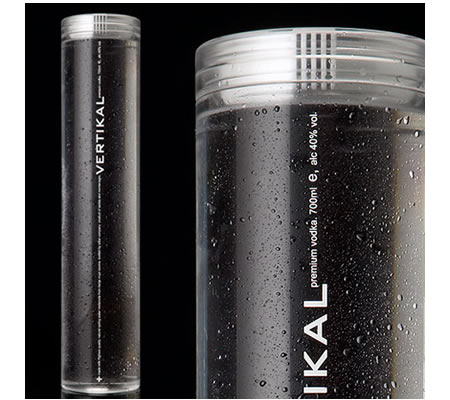 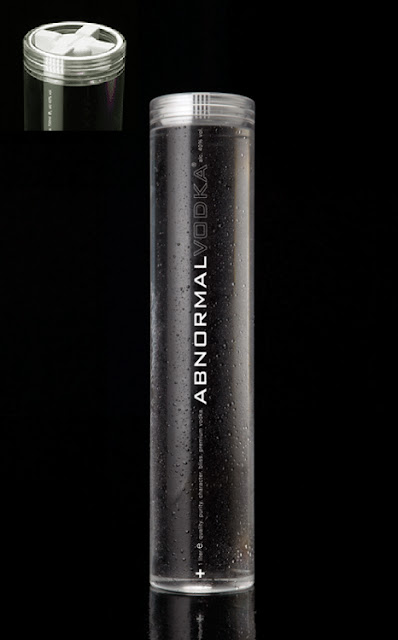 Bong Spirit Vodka has been created by a group of partners in the nightclub, art and entertainment industry. They combined their ideas and resources to craft one of the most notable and interesting spirit brands on the market! 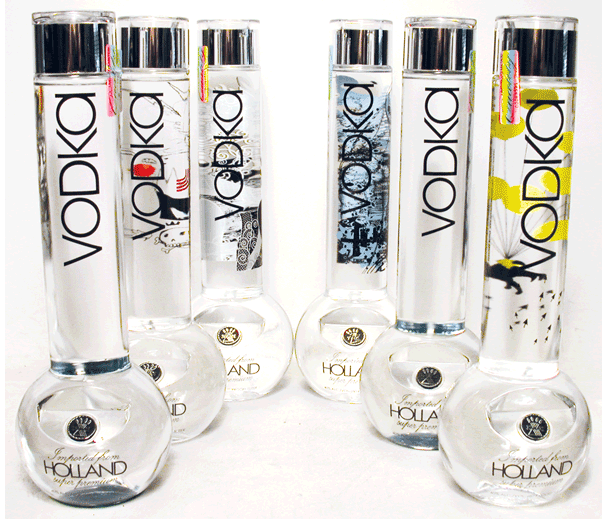 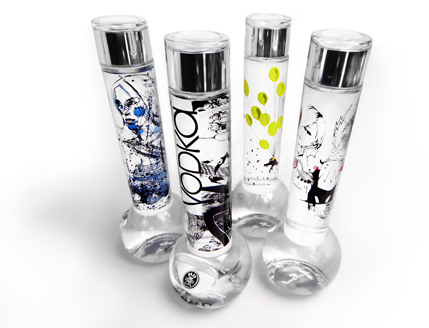 A limited number are available in 5 artist designs – 1 plain hand painted bottle and 4 designed by renowned artists -each individually numbered bottle represents a little slice of history. They continue to solicit artist for new designs each year.

Artist Jim Beach developed the concept of the Bong Spirit brand. It is certainly a well-designed marketing strategy that not only redefines the spirit world, but also the art community. Bottles of Bong Vodka have a distinct shape, are made with fine glass, and topped with a chrome overcap. While the original design is a marvel of its own, a collector series of bottles featuring the art of several up and coming artists is also available and are randomly packed with the unadorned bottles in each case that is distributed. 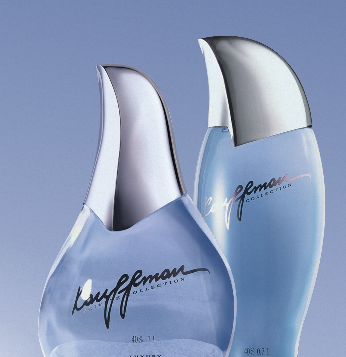 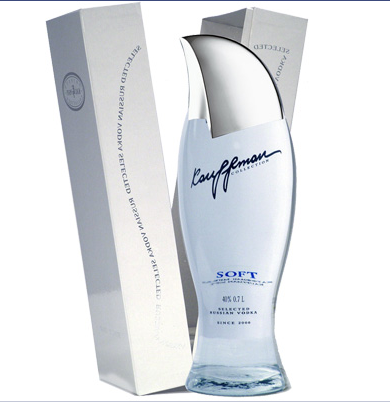 The taste is soft, inherent to a honey-based vodka, with barely perceptible hint of Cornelian cherry. The aroma is delicate, with ginseng and pea tones: the recipe includes ginseng tincture. Natural honey guarantees the long-term storage of the vodka and makes it taste soft and deep.

They also created Vintage Vodkas.
The innovative approach to producing the only vintage vodka in the world involves using natural ingredients from a particular year, producing spirit and vodka itself at the same distillery at the same time and in limited quantity and monitoring every stage of the process. 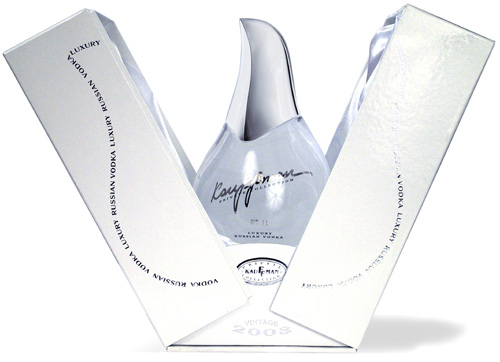 Kauffman’s Luxury Vintage is made from the highest quality wheat of one single harvest only in the years when the finest wheat grains are identified. To guarantee high quality and retain continuity of style Kauffman Luxury is bottled only once per vintage (25.000 bottles) with each bottle carrying a limited edition number. The blend of Kauffman Luxury contains the infusion of dried wheaten crusts that is thoroughly filtered before being added to the other components of Vodka Kauffman Luxury such as rectified ethylic spirit ‘Luxe’, softened water and sugar.

Tasting notes: It is an incredibly elegant, soft, subtle and delicate drink with feint perceptible scent of roasted rye bread crust and a light pleasant taste of mint. 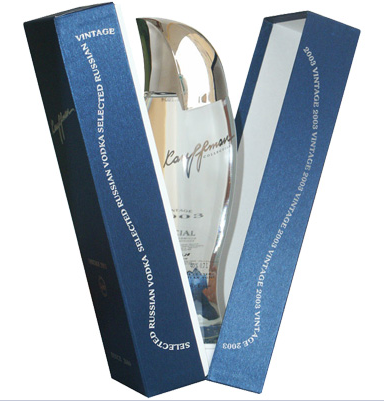 Just as Kauffman Luxury Special Selected Vintage is also made from the highest quality wheat of one single harvest only in the years when the finest wheat grains are identified and bottled only once per vintage (5000 cases). Special Selected Vintage contains feint infusion honey, natural extracts of schizandra, and finest high strength spirit and purest water.

Tasting notes: The taste is soft, inherent to a honey-based vodka, with barely perceptible hints of anise and licorice.

In addition to those, they had two special blends; the Christmas blend and The Inaugural Blend (shown below): 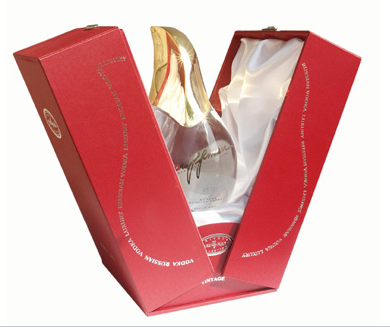 The above Bottle was issued in limited edition on the occasion of the Russian President’s Inauguration in May 2004. The bottle is truly inspirational and decorated by the 24-carat gold sputtering.

The taste is soft and elegant, inherent to a honey-based vodka, marked by a barely perceptible scent of roasted rye bread crust.

Made in Sweden at the Bloomberg estate near Källby, on the shore of Northern Europe’s largest lake, Heavy Water Vodka has the unique taste of Sweden in every sip. 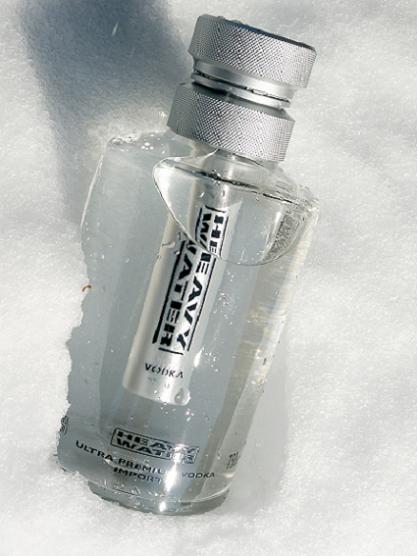 After searching for years to discover the perfect vodka formula, which required them to travel the world, spend countless hours of intense research developing formulas and subsequent arduous hours of sampling, they finally found the vodka they were searching for in

Heavy Water Vodka is made from Scandinavian-grown winter wheat that is fermented and blended with deep artisan well water. It is distilled through a continuous still and filtered, with the actual number of times that it is distilled, as well as the formula, a closely guarded secret, however the result is a product that is rich, balanced and smooth with definite herbal and spicy notes of fennel, toasted almonds and orange.

Heavy Water Vodka made its debut in October 2005, and has already received five international medals.

Even the bottle of Heavy Water Vodka is unique, with its squat shape made by a prestigious French glassmaker with a metal rod inside which bears the name Heavy Water Vodka. The Italian-made, flavor-neutral rod is a playful addition to Heavy Water Vodka with a nod to the fuel rods that are immersed in heavy water to generate energy from plutonium.

Recipient of the International Review of Spirits Award: Gold Medal
Buy it here.

Other vodkas (some premium, some not) with interesting bottles worth noting are:
Liquid ice Organic Grain Vodka in a bottle that looks like it’s trapped in an ice cube (US only),
Vodka 666(in the devil-shaped bottle),
Scotland’s Brilliant Vodka bottle in the five-sided faceted black or clear bottle,
Roberto Cavalli’s Vodka with the snake-wrapped frosted bottle,
Red Army Vodka in the bomb shaped bottle,
Gotham Vodka in the porcelain deco skyscraper decanter
Jean Marc XO Vodka in handblown glass bottle
Ultimat in colored glass decanters

Vodka fan? You may want to check this out:
I’ve created a Vodka board on Pinterest to showcase new brands and bottle designs. There are tons to take a look at, including updated designs of many of the brands shown in this post.
Follow if it’s hip, it’s here’s Vodka – Brands, Bottles & Design board on Pinterest.