` Philippe Starck Pibal Peugeot Bike - If It's Hip, It's Here
Skip to content 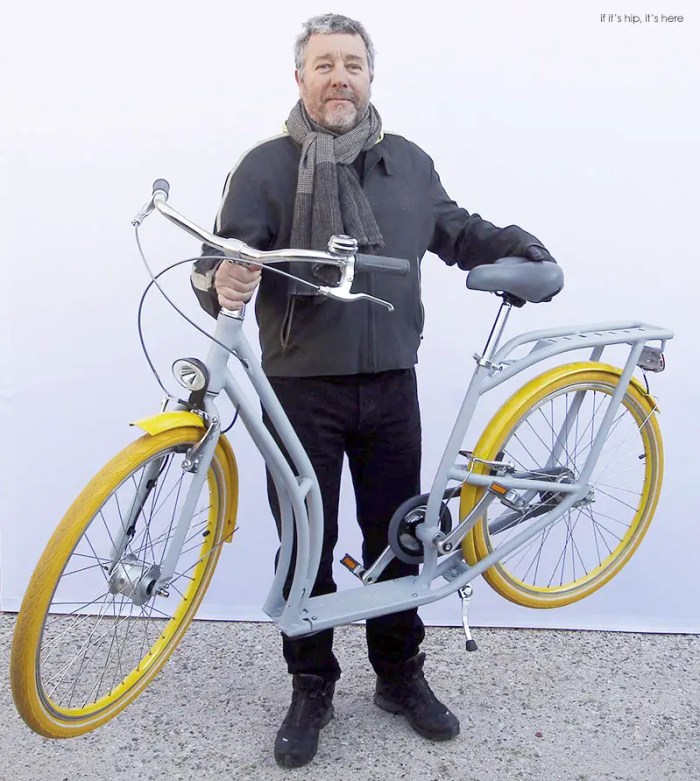 Philippe Stark Unveils ‘The Bicycle Of The Future’ design in Bordeaux When Bordeaux wanted to expand its bike sharing program, it turned to its citizens for input, garnering 300 responses, and the resulting ideas were integrated into a concept bike by designer Philippe Starck. The result is a crowd-sourced bicycle that is claimed to be the “ideal city bike”. In the fall of 2011, the city began soliciting input from its residents about what from they would like to see in a city bike, and the information which came out of asking those questions became the starting point for Starck’s design. The resulting machine, dubbed the City PIBAL Streamer, is a hybrid bicycle design that can be ridden as per usual (pushing pedals to power it), but which can also be ridden like a scooter. During the second annual edition of Cyclab, Philippe Starck presented the final rendering of the “ideal city bike” with Alain Juppé, the Mayor of Bordeaux.

“This is the analysis of the many responses from citizens Bordeaux diverse responses, constructive and intelligent and specificity of Bordeaux, what part of the new idea of ​​this means of locomotion. This seems to be a revolutionary ergonomic inventive and just answer the new questions including pedestrian areas.” said Philippe Starck.

“Bordeaux is a city where cycling in all its forms, plays an increasingly large. We all act today in favor of the practice path. Industrial and political, designers and users, I am delighted. Beyond achievements involved, it seems necessary to open this forward thinking: we must think about the future of cycling. And climate change and other environmental challenges urge us to engage the preparation of the future, a growing amplified its use fits into our daily lives. It contributes new bike.” said Alain Juppé. Sandrine Bouvier of Peugeot says “We are delighted to be associated with the project initiated by the city of Bordeaux to multiply modes of urban transport. Continuous innovation in mobility is a major challenge for the brand since the launch of Mu by Peugeot in September 2009. Successfully mass produce the vision of Starck Bordeaux is the criteria for us exciting.” The bike-scooter hybrid comes with standard pedals and big yellow wheels that enable users to bike along as they would on any other bicycle. The platform placed in the middle of the step-through frame may seem a little eccentric for cyclists who are accustomed to simply leaving their feet on the pedals when they don’t need to pedal the bike, but for younger users who are a lot more accustomed to riding scooters, this unique feature could be particularly attractive. The trendy bike also has a large basket in front to help users carry their shopping with them and should prompt more people to leave their cars at home the next time they need to pop out to buy groceries.

The new bike-scooters will revitalize the bike park and enhance the mobility of the local inhabitant, thanks to a new ergonomic design to be produced by Peugeot for an urban environment. The bikes will available on loan to the inhabitants of Bordeaux.

“This idea for a new means of locomotion sprang from the analysis of much feedback from the citizens of Bordeaux, diverse opinions, constructive and intelligent ideas and the specificities of Bordeaux. This revolutionary solution seems to be the inventive and appropriate response to questions being asked regarding pedestrian areas”.

3000 of the bikes are expected to be manufactured by Peugeot by the end of this year, and will be added to Bordeaux’s bicycle sharing program.

This Autonomous Tent in Big Sur Provides Glamping With A View