I’ve recently come across an artist whose subjects align with more than one of my personal art fetishes. Combining modern architecture, trees and swimming pools – even empty swimming pools to boot (I have a thing for paintings of pools, both empty and full, see here), Paul Davies‘ work really speaks to me. I just love the juxtaposition of the strong long low horizontals of the modern architecture with the soaring verticals of the Palm and Aspen trees.

The Art of Paul Davies

Apparently, I’m not alone. His work speaks to many people since all the paintings in his upcoming show-  which opens today, have already sold. No, I’m not kidding.

Sydney artist Paul Davies (not to be confused with another talented Paul Davies) has a new exhibit of his 2009 ‘new paintings’ at the Tim Olsen Gallery (who doesn’t have a functioning website any longer), beginning today through May 17 in Australia.

Prices range from $7,700.00 to $24,000.00 USD. His work, which is acrylic on canvas or linen, combines modernist facades with bold washes of color. He cites David Hockney and David Schnell as some of his inspirations, I also see a little Diebenkorn. Rather than describe them, take a look for yourself. 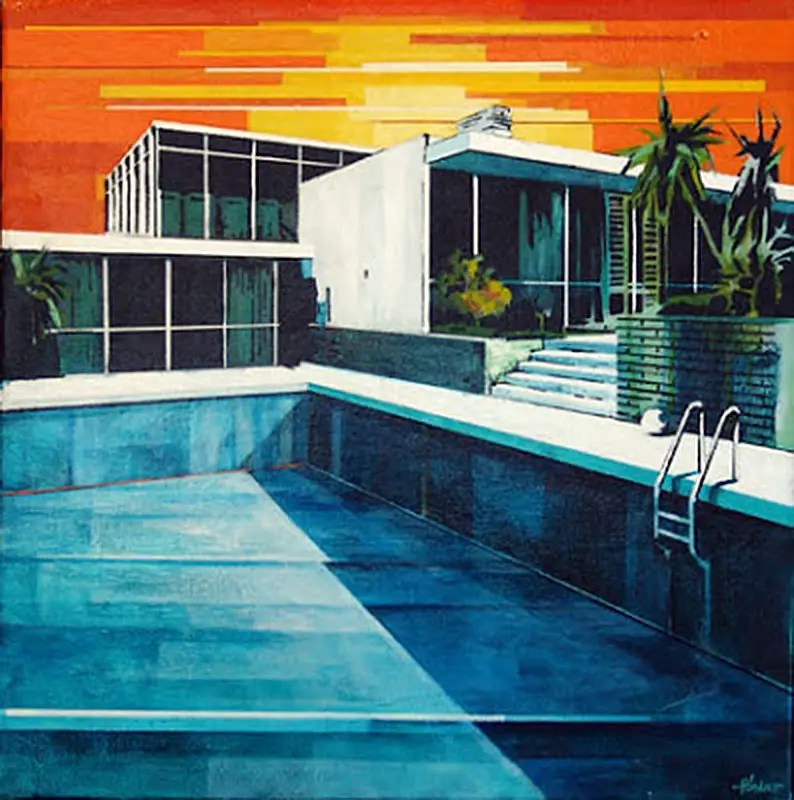 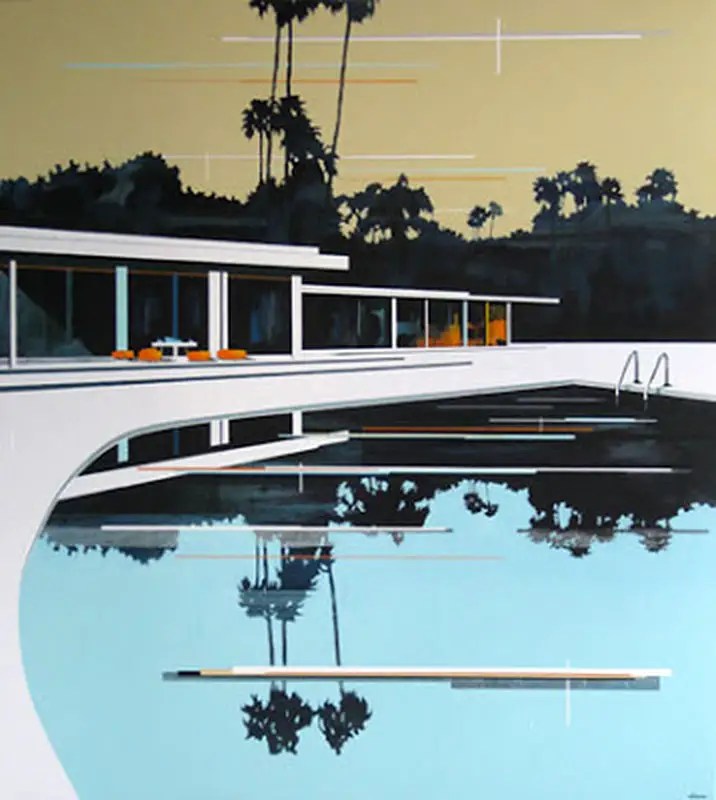 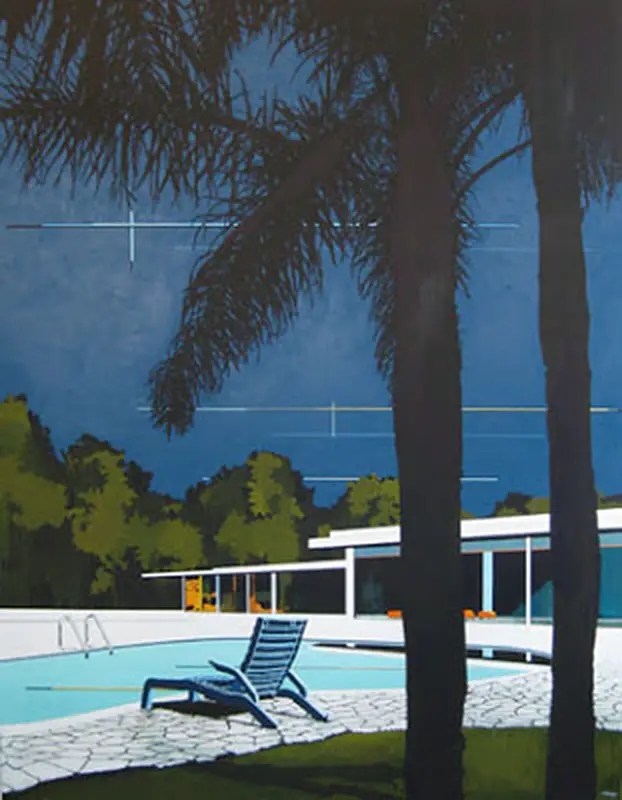 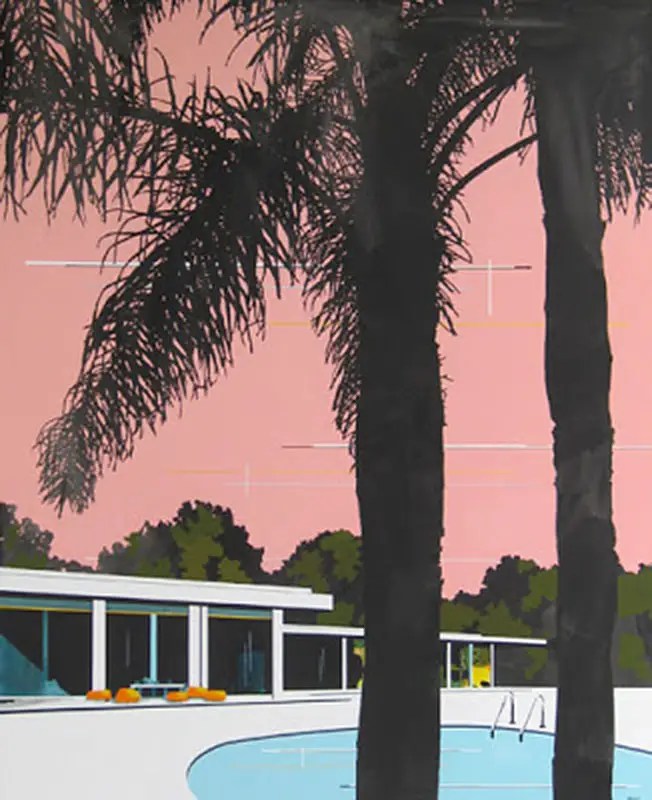 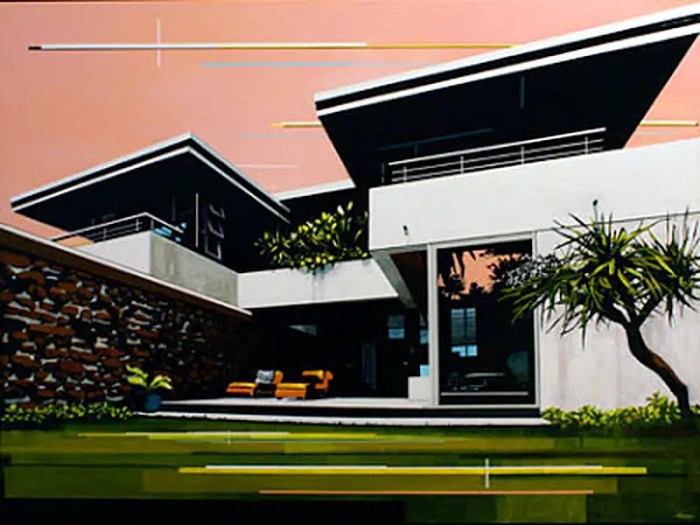 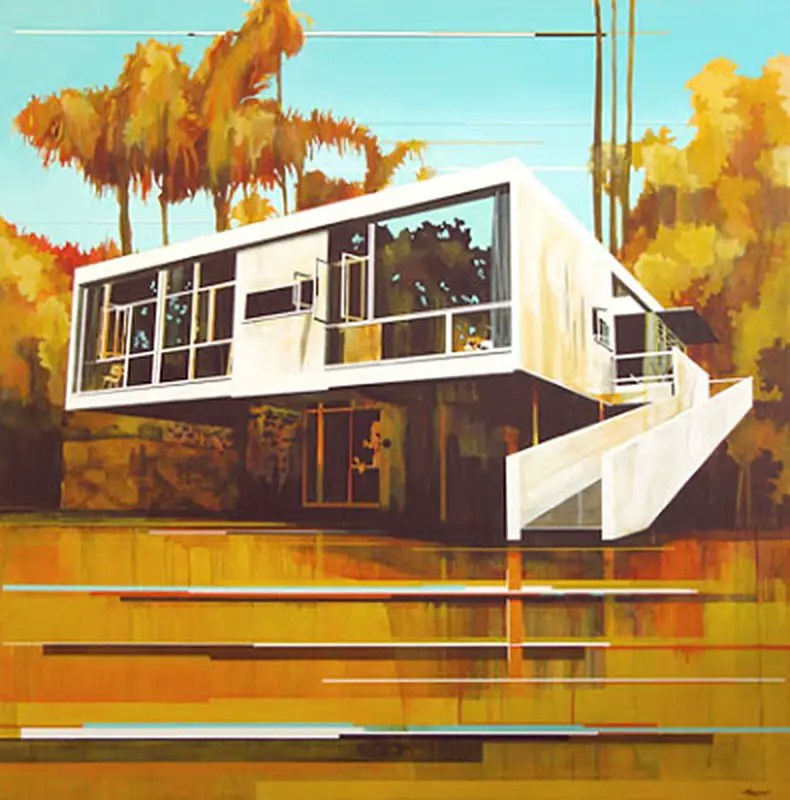 ABOUT THE ARTIST
(Bio from timolsongallery.com)

Sydney based artist Paul Davies has been exhibiting with Australian and international galleries for the past five years. Raised in Gosford, NSW, Davies learned traditionalist painting techniques from local landscape painter Kell Connell. He then studied toward a Bachelor of Arts in Fine Arts from the University of New South Wales (College of Fine Arts), majoring in Sculpture. Davies then travelled to Asia, Africa, Europe and North America; and spent several months developing his paintings in England. It was in London that Davies held his first solo exhibition at DK Gallery in Russell Square. At this time he was also awarded a prize from London’s TNT Magazine for excellence in photography. Returning to Sydney in 2001, Davies held consistent and original solo exhibits with Space3, Knot Gallery and Firstdraft Gallery. His 2005 solo show at ‘blank_space’ in Sydney was the first sell out exhibition for the gallery. Largely working with Australian and international modernist architectural facades and interiors, Paul Davies work features the use of delicate hand-cut paper stencils, that provide a perspective, content and detail within a painterly abstract environment. These stencils are created using both Davies’ own and researched photographs. The buildings in Davies paintings remain vacant of people to reinforce the original idea of its architect, allowing the viewer to experience an “open plan living” ideal. Davies work looks at both the restored and forgotten modernist buildings in a way relevant to today rather than isolating them in their time. In creating this unique style of landscape painting, Paul Davies sights inspiration from some of the world’s greatest living artists such as Peter Doig, David Hockney and David Schnell. Davies’ work appears in private and corporate collections both here and overseas and has been commissioned to create works for a diverse range of companies including; Historic Houses Trust, Stockland and BYL Companies Philadelphia. Recent publications include Art & Australia, Art World, Vogue, Harpers Bazaar, Belle, Wish, Inside Out, Urbis, and Yen magazine as part of the China Heights Collective.

I am nuts about pool paintings and paintings of swimmers. Here’s my Pinterest board of Pool Paintings which features hundreds.

Moleskine Game Of Thrones Video Made of Paper