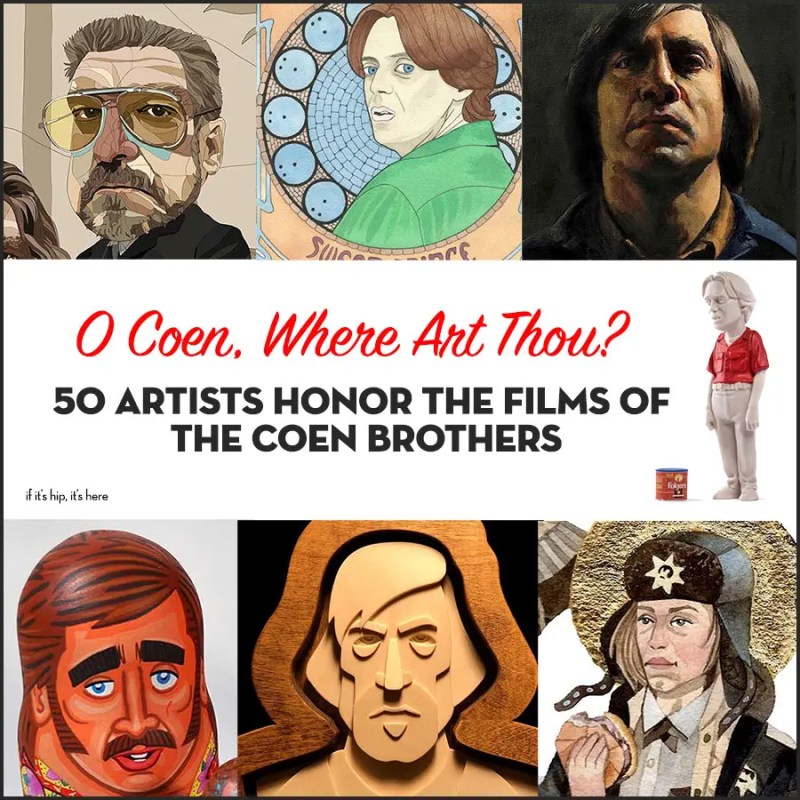 If you’re a lover of movies, you are undoubtedly aware of the writing, directing and producing duo known as The Coen Brothers. American filmmakers Joel and Ethan Coen have made 17 films in their 32 years of working together. The brothers have been nominated for thirteen Academy Awards together, individually for one award each, winning Best Original Screenplay for Fargo and Best Picture, Best Director and Best Adapted Screenplay for No Country for Old Men. The duo also won the Palme d’Or for Barton Fink (1991) and were nominated for Fargo.

O Coen, Where Art Thou? is a tribute to films of the Coen Brothers on view at SPOKE Art for the month of February, opening tomorrow. Over 50 artists, inspired by Coen Brothers movies celebrate the American filmmakers with painting, sculpture, prints and more.

Artists Honor The Films of The Coen Brothers

SPOKE Art presents the O Coen, Where Art Thou? art show. A tribute by over fifty artists from around the world celebrating the films of American film-makers, Joel and Ethan Coen. Drawing inspiration from the duo’s classic films such as Raising Arizona, Fargo, The Big Lebowski and No Country For Old Men, the exhibition is comprised of a diverse array of painting, sculpture, and limited edition prints, with each artist offering their interpretation of iconic characters in the Coen Brothers films.

Here’s a sneak peek at some of the pieces from the exhibit:

O Coen, Where Art Thou?
Opening Reception: Saturday, February 3rd from 6 – 9 pm
Costumes are encouraged and some of the artists will be in attendance.
On View: February 3rd – February 25th, 2018
SPOKE Art