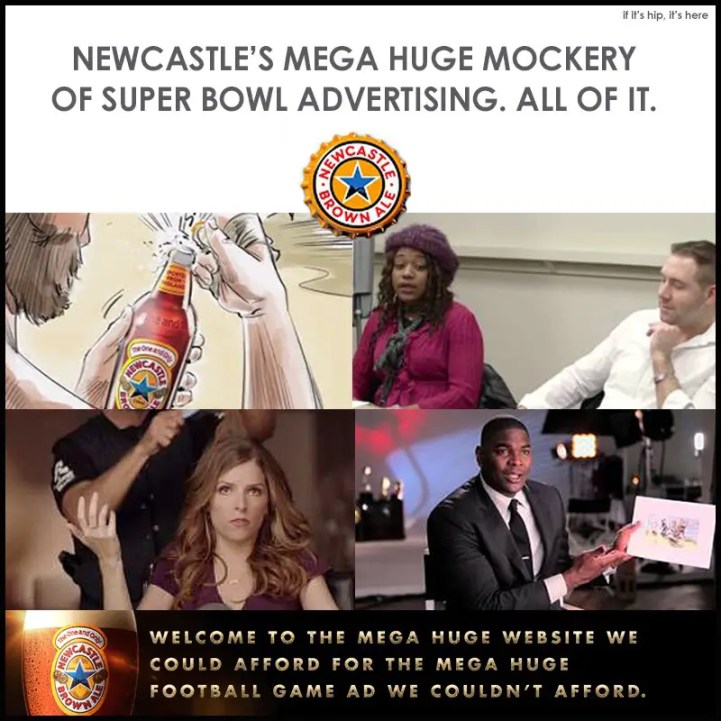 In a clever twist on being clever, Newcastle Ale (which is owned by Heineken) has launched a Mega Huge anti-Super Bowl Ad campaign mocking the fact that they didn’t create a mega Huge Super Bowl ad campaign.

With tongue-in-cheek banners, a website and a series of videos, they manage to make fun of everything related to Super Bowl advertising through the creative process, the focus group research, the teaser/trailer/making of phenomenon, the would-be pitchmen: Anna Kendrick and Keyshawn Johnson and of course, the prohibitive cost.

Here is the full campaign followed by the press release: The 9 funny videos below are shown in the order in which they were released:

1,. The Ad Newcastle made to prepare you for the ad they didn’t make:

2. Newcastle’s Cheap Ad they made for the pricey ad they didn’t make:

3. The Teaser for the Trailer for Newcastle’s Mega Huge Football Game Ad.
It’s so epic, they made a trailer for the trailer:

7. Keyshawn Johnson: Behind The Scenes of the Mega Huge Football Ad they almost made:

8. Anna Kendrick: Behind The Scenes of the Mega Huge Football Ad they almost made:
sadly, this video has since been removed from youtube.

Actress and singer Anna Kendrick has racked up an impressive string of triumphs: Oscar, Golden Globe and Screen Actors Guild nominations for her performance in “Up in the Air;” a starring role in the hit film “Pitch Perfect;” and most recently with her 2013 triple-platinum single, “Cups.” But she will never get the chance to play what might have been her greatest role yet: the lead in an epic, Big Game spot for Newcastle Brown Ale.

It’s too bad Newcastle doesn’t believe in spending millions on a Mega Huge Football Game ad because it would have been amazing. Instead, Kendrick and football legend Keyshawn Johnson are taking center stage in a tongue-in-cheek marketing effort dubbed “If We Made It” that pokes fun at the ridiculous excess, overused schtick and over-the-top antics found in traditional Big Game commercials.

Newcastle may not be making the ad, but fortunately fans will be able to see all the trailers, storyboards, focus groups and behind-the-scenes interviews with Kendrick and Johnson at www.IfWeMadeIt.com. There also will be fresh content posted in real-time on the day of the Big Game.

“We think the formula for creating the most epic Big Game commercial of all time is pretty simple, but when it comes down to it, we’d rather have people drink our beer while watching other companies’ ads,“ said Charles van Es, senior brand director for Newcastle Brown Ale. “And to be honest, we don’t really have the money or permission to advertise on the game either.”

What did the world miss when Newcastle decided to keep its focus on making great beer instead of spending millions on making outlandish ads? Giant robots, beach babes and crazy celebrity cameos – as well as Kendrick starring as Hot Party Girl #1 and Johnson voicing a skateboarding cat.

“It’s a shame Newcastle didn’t have the budget to actually produce and air this ad. I was really looking forward to a huge paycheck for doing no real work at all,” said Anna Kendrick. “Indie cred from award-winning films is great and all, but I can’t buy a new car with indie cred.”

“Newcastle asked me to be in its Big Game ad, and I wish they would’ve made it, because I truly believe it would’ve been the greatest football-related thing I’ve ever done,” said Keyshawn Johnson. “For years, I’ve dreamed of voicing a skateboard-riding cat in a beer commercial, and thanks to Newcastle, I nearly achieved that oddly specific goal.”

Fans can join in on the fun at www.IfWeMadeIt.com or by following Newcastle on Facebook and Twitter, where they’ll find a variety of humorous content related to the astonishing Big Game ad that would have blown the world’s mind – everything except the ad, of course.

The program was created in partnership with Droga5 and is part of Newcastle’s long-running “No Bollocks” campaign, which takes a lighthearted, no-nonsense, honest approach to marketing by shining a light on the silly, stale and sometimes deceptive clichés often found in beer advertising.