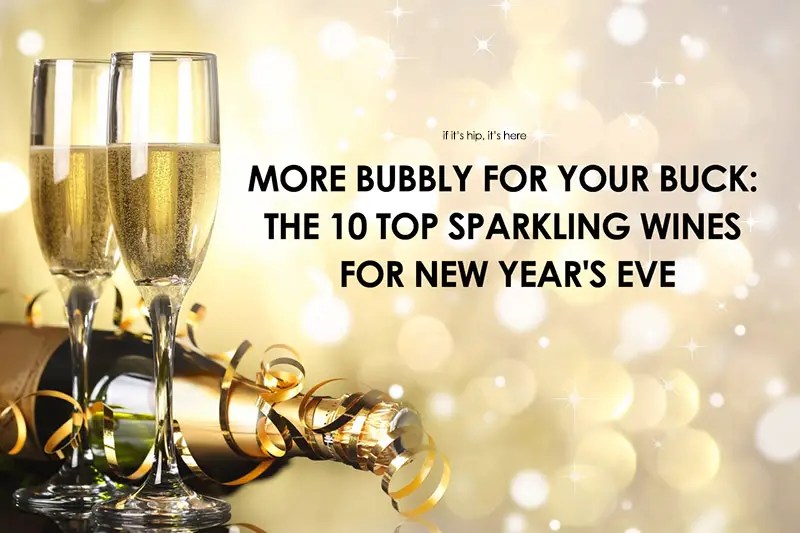 As New Year’s Eve approaches, several of us are in search of the right bubbly (and undoubtedly this year, the best ‘deal’) with which to toast the ringing in of 2009. Eric Asimov, chief wine critic for the NY times gives us sparkling wine alternatives to the pricier ‘champagne’, selected by a panel of 25 experts, that range from $10.00 to $20.00. By ERIC ASIMOV, December 24, 2008
THE corks will pop as usual this holiday season, and the bubbly will froth over into the glasses. Toasts will be offered, and the good times will still roll, but perhaps in a more subdued fashion. Fewer of those bottles of sparkling wine are likely to be Champagne this December.

All over the United States, people are spending less for wine, and aiming for a lower-key expression of seasonal joy. That means less Champagne. Partly, this is an economic decision. “People are clearly trading down,” said Jon Fredrikson of Gomberg, Fredrikson & Associates, a wine industry analyst in California. “People are still drinking wine, but it’s clearly at lower price points.”

But emotions and appearances play an important role in the decision as well. Aside from a general shortage of celebratory occasions like mergers, closings, bonuses and office parties, many restaurateurs say that customers are avoiding even the appearance of celebration.

“People just don’t want to look extravagant today,” said Paul Grieco, an owner of Hearth, Insieme and Terroir in Manhattan. “They still want to drink, so they cut out the Champagne and go directly to whatever they’re drinking with dinner.”

After several strong years, Champagne sales in the United States began to slip in 2007 as the weak dollar caused prices to rise. About 21 million bottles were shipped to the United States in 2007, down 2 percent from 2006, and the drop became precipitous in 2008. Through August, sales were down 17 percent over the corresponding period last year, according to Sam Heitner, director of the Office of Champagne U.S.A., a trade organization, and that doesn’t include the last three months of the year, when much of the Champagne is sold. “We’re in uncharted territory,” he said.

Recognizing the concern over spending, the wine panel recently tasted 25 sparkling wines priced $10 to $20, the sweet spot these days for good wine values.

We restricted ourselves to dry sparkling wines, while ruling out sparkling rosés and reds. For the tasting, Florence Fabricant and I were joined by the husband-and-wife team of Scott Mayger, the general manager of Telepan on the Upper West Side, and Beth von Benz, a wine consultant. The good news is that outside of Champagne, just about any region in the world that makes wine makes sparkling wine, too.

Among our 25 bottles were wines from France, Spain, Italy, Germany and Australia, as well as California, Washington state, New Mexico and Michigan. Believe me, that’s just the beginning. I’ve enjoyed good bottles from Austria, Massachusetts and Georgia (the country, not the state). I did set one more parameter: no prosecco. I like prosecco, but I enjoy it best in spring and summer, when its sprightliness seems to match the season. I didn’t rule out sekt, the sparkling wine of Germany, but maybe I should have. I’ve rarely met a sekt I’ve liked, and neither one in our tasting made our top 10. And I confess, I’m not much of a fan either of cava, the sparkling wine of Spain.

One of the three in our tasting, the Reserva Heredad from Segura Viudas, made our top 10 at No. 9, though at $20 it was maybe not such a good value. Perhaps in a different context, say, a cafe in Frankfurt or tapas bar in Barcelona, these wines might have been more appealing. But when they were mixed in with a bunch of bottles made in the fashion of Champagne, with some proportion of chardonnay and pinot noir, the main grapes of Champagne, we preferred those bottles, wherever they came from. Our top bottle, the 2004 brut from Domaine Carneros, was, of course, from California. We found it elegant and delicious, and it just squeaked by two other far-flung bottles.

Our No. 2, the Contadi Castaldi, was from the Italian region of Franciacorta, which produces some excellent Champagne facsimiles. This one was particularly dry and light-bodied, with aromas of herbs, spices and flowers.

And our No. 3 was a sparkling wine from Burgundy, the toasty, refreshing Parigot & Richard blanc de blancs, made mostly from chardonnay. While our price range was $10 to $20, most of the wines in the tasting were $15 to $20.

One of the few exceptions, and the only one to make the list, was the Crémant de Limoux blanc de blancs from Domaine J. Laurens, which at $13 was our best value. Habitués of the bargain aisle may be familiar with blanquette de Limoux, a sparkling wine from the same region in southern France. This is generally even cheaper than the Laurens, and usually made from the mauzac grape. The crémant is made of chardonnay and chenin blanc, which gives an added smoothness and elegance.

Other Champagne-style wines that we liked included three more from California, the Roederer Estate, long a personal favorite of mine, as well as the Piper Sonoma and the Gloria Ferrer. Two other French wines rounded out our top 10.

La Cravatine from Fabrice Gasnier was an oddity, a sparkling Chinon made from the cabernet franc grape. It was nonetheless light and refreshing, as was our No. 10, the herbal-scented crémant d’Alsace from Lucien Albrecht, made from pinot blanc and pinot auxerrois.

Let’s be honest, none of these bottles will match a very good Champagne. But they cost half what you would pay these days for the least expensive Champagne, and they were enjoyable. Even so, they may all still cost more than many people are willing to spend. Mr. Fredrikson said the greatest growth right now is in bottles $6 and under, which includes mass-produced sparkling wines that in my opinion are not worth the money.

There may be one bright spot for Champagne. Roberto Rogness, general manager of Wine Expo in Santa Monica, Calif., which offers an exceptional selection of sparkling wines, reports that even though cavas, crémants and other Champagne alternatives are selling “by the boatload,” Champagne sales seem to be holding their own. And Mr. Rogness is looking hopefully to next year. “We’re starting to get feelers for inauguration parties,” he said.

Tasting Report: They Aren’t Champagne, but They Do Sparkle If you want the real thing- actual Champagne– here’s a list of resources from around the Web about Champagne as selected by researchers and editors of The New York Times:

Here’s a huge post on just about everything you need to know when it comes to champagne from last season.