` Mod Mickeys: The Modernization of Disney's Mickey Mouse - If It's Hip, It's Here
Skip to content 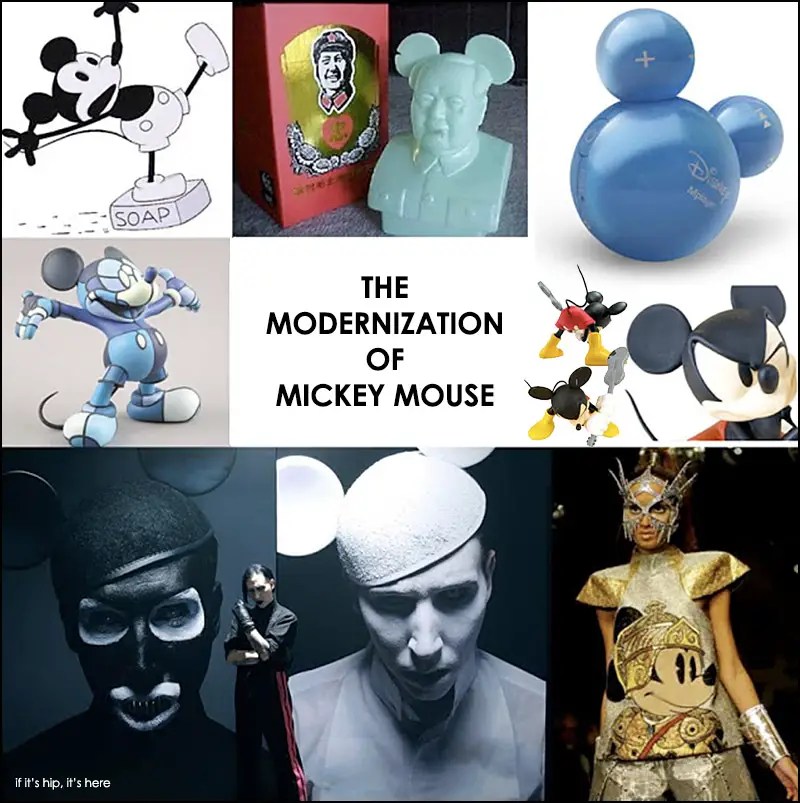 The most famous Disney character continues to evolve as trends, art and style do. Take a look at the very first images of Walt Disney’s Mickey Mouse and his transformation over the years as the iconic rodent is turned into everything from toys to electronics.

The modernization of Mickey Mouse

The first and early images of Mickey Mouse:

“For at least a half-century Mickey Mouse, ears and all, has served as one of the most potent icons in contemporary visual culture. The poster boy for everything from cinematic innovation to American cultural ‘imperialism,’ the animated rodent is freighted with a veritable encyclopedia of inference. Not surprisingly, artists the world over — and especially Mickey’s countrymen and -women — have fixated on the simply, distinctively drawn figure. But however much that (deceptively) ingenuous face and unique silhouette turn up in Pop paintings, social-commentary cartoons, and even abstract sculpture, writers and historians have let Mickey’s ubiquity pass without substantial comment. Until now. Defying the perils of post-modernist close reading, pop-culture fetishism, and the fabled wrath of Disney Corp., Holly Crawford proffers an exhaustive documentation, classification, and analysis of Mickey’s many appearances in the visual art of our time. Her study fills a gap in the critical history of recent art, not to mention in Mouseology.” —Peter Frank, Critic and Curator above: Gottfried Helnwein’s portraits of Marilyn Manson as Mickey The above painting is one of the modern interpretations of Disney’s Mickey Mouse in Holly Crawford’s book, Attached to The Mouse. Those who have used the same or multiple forms of the image many times over many years include Lichtenstein, Helnwein, Oldenburg, Pensato, Ospina, and Chagoya. The facade of Disney and America in the guise of the Mouse is one of the things that Helnwein and others present to us. Claes Oldenburg took the facade to its literal extreme when he proposed a flat Mouse’s image for a facade to Chicago’s Museum of Contemporary Art, and produced a flat Mouse sculpture. Helnwein, Oldenburg and others are using the Mouse to make social and cultural comments about our society, in the broadest sense, but with humor. Paperback: 194 pages. University Press of America (July 28, 2006) Buy the book here. This past summer, Disney & Wa-Qu, A Japanese Design Firm teamed up for an exhibit that incorporated Mickey into interior lifestyle elements such as wallpaper, chopsticks, lacquer dishes and more. The exhibit has ended but you can see some of it online here.
More Exhibit info here

Some other unusual and collectible modern interpretations of Mickey are shown below. With links to purchase. Three new “modern” Mickeys.  Manufactured by Tomy for Disney of Japan. Released a few months ago; The Punk, Pass Da M.I.C., and Take Off sold for approximately $45 USD each (sold out): Above: This version of Mickey Mouse was featured in the animated short, Runaway Brain, is a super hot collectible vinyl figure for any Mickey Mouse fan. Produced by Medicom.4 inches tall (buy it here) 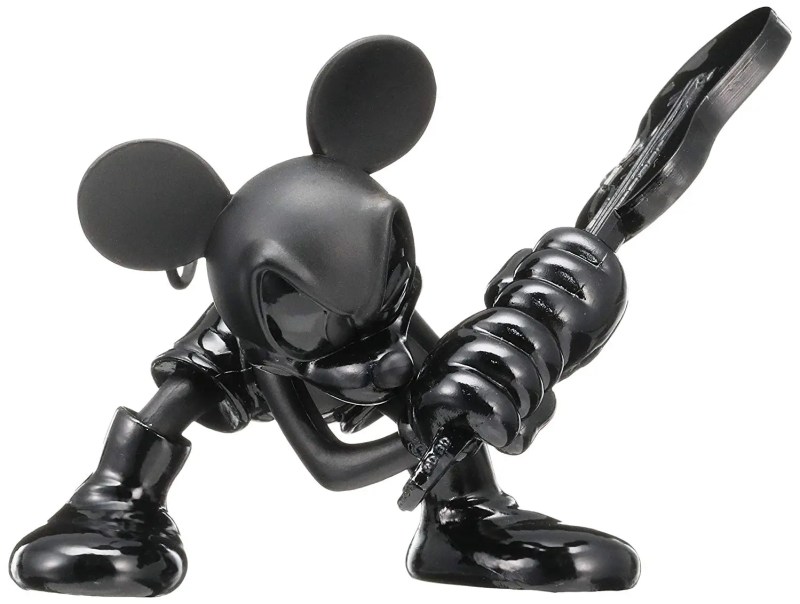 Buy the above version here Frank Kozik’s controversial reinterpretation of Chairman Mao stands 16 inches tall in white or black, reminiscent of the plaster of Paris busts of yesteryear but this is pure rotocast vinyl. Comes packaged in a beautiful red box with gold foil printing. Very hard to find in white now. 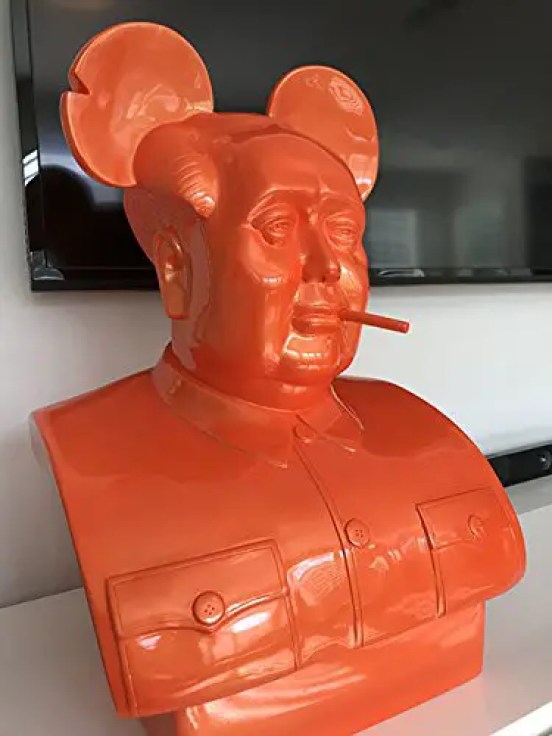 Mickey has also made some appearances in haute couture lately. 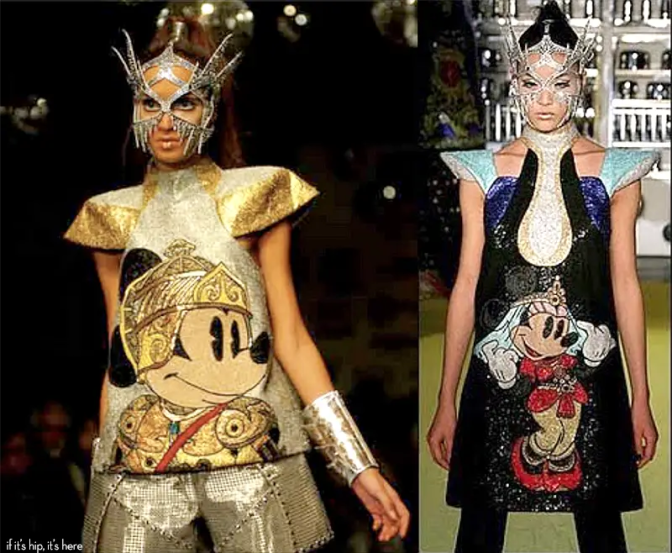 Disney even created their own artsy Mickey Mouse toys with Vinylmation (shown below). Sadly, Vinylmation and Disney stopped creating these a few years ago, but you can still find some many here and there the Vinylmation vault here. There are literally hundred of contemporary artists who have ‘updated’ Mickey in their own visions, too many to list. But browse or search Behance, Coroflot, Deviant Art or ebay for “Mickey Mouse” and you’ll see many more.

Available in November 2018, Walt Disney’s Mickey Mouse: The Ultimate History is a beautiful hardcover that celebrates 90 years of Mickey in one of the most expansive illustrated publications on the Disney universe. Of course, traditional Mickey always has his appeal as well.
For Disney’s newest Mouse items, shop the Disney Store. or Check on Amazon for all things Mickey here!