` Millenials Spend More on Christmas Gifts Than Others. And We Thought They Were Self-Absorbed. - If It's Hip, It's Here
Skip to content 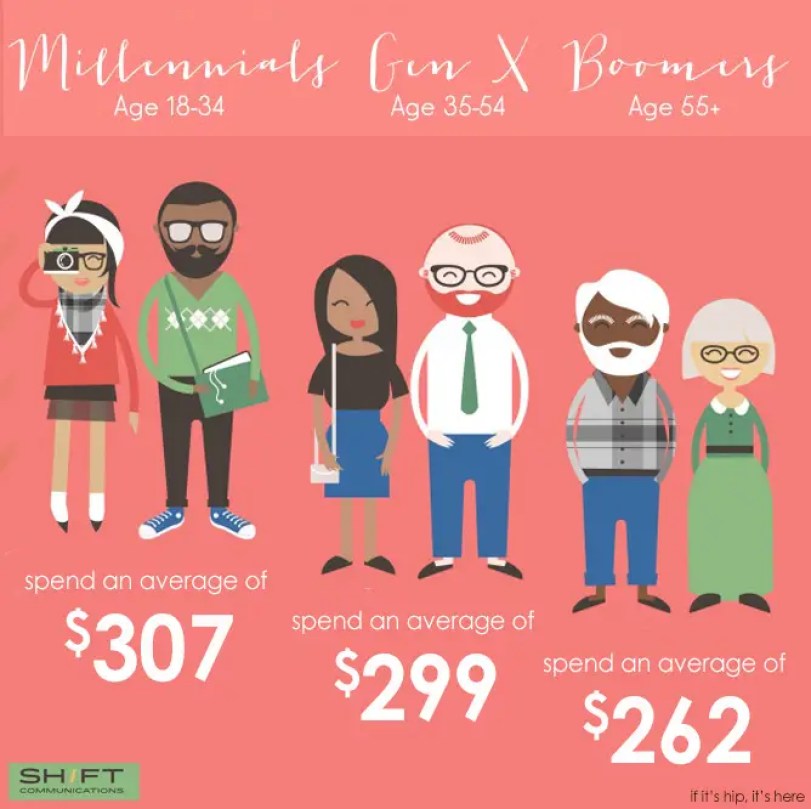 They may be self-absorbed with their selfies and short-attention spans, but it turns out that, according to the following Shift Communications Christmas Spending Infographic, Millenials (ages 18-34) are actually more generous than the rest of us when it comes to spending money on Christmas gifts. At least in the United States.

And how does each generation determine what to purchase? Millennials and Generation Xers learn online about the latest holiday gift trends. Boomers get their info from TV.

Other insights include the following:
• 46% of Americans wait until December to purchase gifts.
• Gen X prefers putting up holiday decorations to finding/giving presents or to attending holiday dinners and parties.
• Boomers find the crowds most off-putting for holiday shopping while Millenials and Gen X greatest dislike is spending money.
• Of all three generations, the most requested present is a Gift Card.
• Most popular toys this holiday season were LEGOs, Nintendo DS and dolls from Disney’s Frozen.

What was the methodology used to gather this information?

SHIFT Communications commissioned Google Consumer Surveys to collect responses from  a representative sample  of 1000 respondents. The survey collected 10001 responses with an RMSE Score** of %4.7. The survey population was the adult internet user population of the US weighted against the US Census Bureau Current population survey.

** The Root Mean Square Error (RMSE) (also called the root mean square deviation, RMSD) is a frequently used measure of the difference between values predicted by a model and the values actually observed from the environment that is being modelled.