One of the leading figurative painters of his generation, Jonathan Wateridge (born in Zambia, 1972) recently exhibited his latest work, a collection of paintings named Enclave, at Pace London. It’s not easy to find the work from this show. A fan of his, I was looking forward to seeing the paintings from the exhibit, but they exist neither on PACE Gallery’s site nor on the site of the artist.

After some research I was able to locate several of the paintings through various articles, Instagram posts and online magazines, so I can share them with you.

the following text is from the gallery’s press release:
In his first exhibition with Pace London and HENI, Wateridge presents his most expressive and personal body of work to date. As a starting point for the series, the artist constructed a large scale set of his childhood garden in Zambia and then worked with actors to develop the imagery for his paintings. Enclosed in an apparent world of poolside suburban sunshine, Enclave points to a protected yet fictionalized space that references both the artist’s childhood memories of a lost past juxtaposed with the wider issues of the West’s role in our post-colonial world. 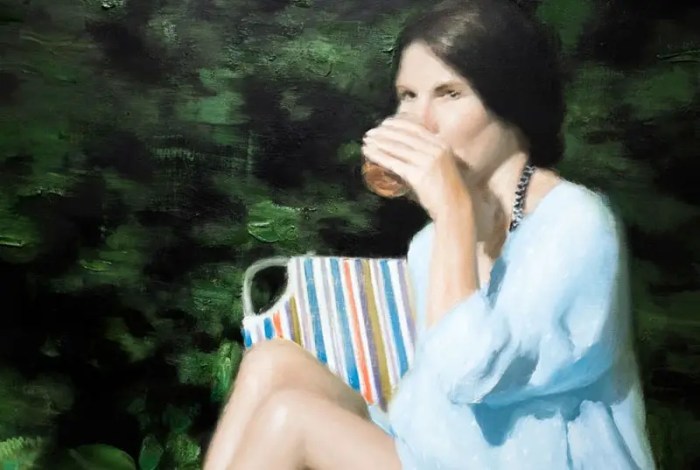 These new works represent an evolution in Wateridge’s painting practice. Initially the works appear as a realist depiction of the scene at hand but the wide variance of mark making and focus on surface, means that, on closer inspection, their verisimilitude begins to break down. As a result, the materiality of the paint comes to the fore. This serves as both a celebration of the painterly and a subtle reminder to the viewer that this is an entirely fabricated environment. The interplay of the figure paintings with the more formal works of the surrounding garden wall – a leitmotif that runs throughout the exhibition – also places an emphasis on the language of painting as much as narrative or social connotations.

The works depict everyday scenes such as sunbathing or lying post-dip on the wet poolside, sharing a drink on the patio or children playing with the family dog. However, through Wateridge’s orchestrated control of the environment, their inherent normality creates a world that becomes increasingly strange and unfamiliar. This subsequent sense of unease and daylight disquiet also hints at the larger issues at work behind the halcyon façade.

In paintings such as Swimmer, or Pool, the reclining figures have echoes that range from the Jonestown massacre, to filmmaker John Carpenter. Cinematography is further explored with allusions to Frank Perry’s 1968 film The Swimmer, which charts the suburban odyssey of a man through a world to which he no longer has access. (if you haven’t seen The Swimmer, I highly recommend it) 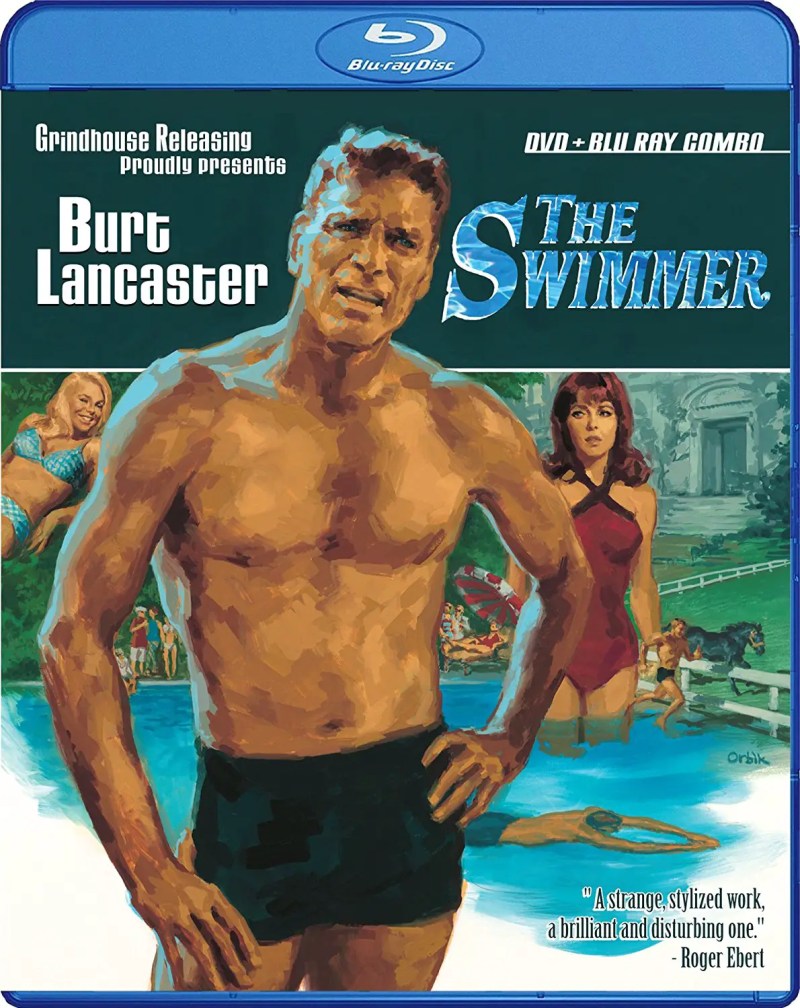 For Enclave, the artist recasts the all American actor Burt Lancaster as a young African man thereby creating a new set of loaded and political associations.

Literary references are embedded within the paintings, in particular the writing of the Argentinian author Adolfo Bioy Cesares and his short story The Invention of Morel, where a castaway finds himself trapped on an island uncannily populated by people he can see but who remain unaware of his presence. He moves around them “simultaneously, almost in the same places, without colliding” [1].

There is a similar haunted quality within Enclave, with its white denizens perhaps being merely ciphers of a nostalgic past that no longer exists. At the same time, the African swimmer suggests the spectre of a colonial history that haunts that nostalgia, his contemporary form and steady gaze challenging the West’s lingering sense of entitlement. In Enclave, the artist has conjured up an ambiguous world that attempts to unravel what might be termed ‘a politics of memory’, a strategy that is both personal and political in its reading.

The exhibition is presented in cooperation with Mark Sanders Art Consultancy.

About (from his own website):
Jonathan Wateridge’s paintings are elaborately crafted ‘non-events’ that have the trappings of a real occurrence but for the most part are entirely fabricated.

A significant part of his work over recent years has been to reconfigure or re-make a given scenario or found image. This involves building full-scale sets and using performers to enact roles, within the context of the studio, in order to set up questions about the way we frame and understand notions of the real.

The work employs painterly realism as a ‘default setting’ by which to view the world, curbing any excesses of expressive style to emphasise not only the often fleeting, banal and everyday quality of the scenes depicted but also the nature of their construction.

In recent work, the tension between depiction and form (the social dimension of the figuration and the more formal ‘abstracted’ elements in the paintings) represents the artist’s increasing exploration into the relationship of the medium and its history to the shifting images of contemporary life.

If you didn’t know – I’m obsessed with pool and swimming paintings. Here are over 100: