` Redesigned NYC Taxi Logo - If It's Hip, It's Here
Skip to content

Are you aware of the new design for the New York City Taxicabs? The one that seems universally despised?

In an attempt to update the new York City Taxicabs logo, several fundamental design disasters took place. Starting with using more than one firm’s work to do it and ending up with a Frankenstein’s monster hybrid of Smart Design’s original work and Wolff Olin’s logo for the city of NYC.

Further complicated by the input of too many city related firms and opinions.

Below is some background (admittedly taken directly from the NY Times because it’s a great article that walks you through how they came to this final design) along with several respected designer’s feedback.

Of course, there are hundreds of designer’s opinions on this. On blogs, online design mags and comments on the new york times site. And most seem to truly despise the new logo.

And I have to agree.. along with wondering to myself .. what? they couldn’t find one decent design firm in NY??

It wasn’t sooo bad until Wolff Olins new NYC logo had to be incorporated into it.

Wolff Olins, by the way, is the same company behind the heinous London 2012 Olympics logo.

If the new NYC Taxi logo does not seem to be the smoothest work of design, that may be because it traveled a bumpy road on its way to more than 26,000 yellow cab doors.

The first logo (seen above) by Smart Design was simply the capital letters NYC, followed by slightly higher capital letters spelling TAXI. The words were set in a custom typeface based loosely on the computer-generated block letters once found on driver’s licenses. Smart Design moved the fare information panel from the front door to the rear door, where passengers were more likely to see it, and added a pictogram showing a person hailing a cab. It moved the medallion number to the rear of the cab, also to improve its visibility and added a streaming trail of rectangles to recall the historical Checker. 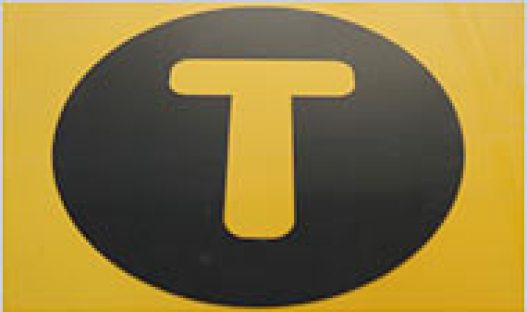 Bump No. 1 occurred when city officials said that the all-type logo was not flashy enough. Trying again (above), the designers placed a bold T set in the middle of a black circle, something evocative of public transit. (Particularly if you’re from Boston.) Davin Stowell, the chief executive of Smart Design, recalled the concept. “Let’s make it iconic and big,” he said. “Everybody knows what it is. You don’t need the words.” 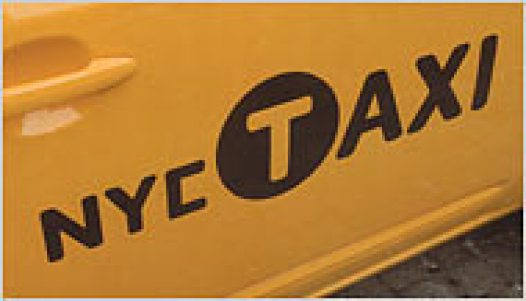 Bump No. 2 occurred when it dawned on city officials that the Metropolitan Transportation Authority intended to use the T designation for the future Second Avenue subway. Lest any confusion arise, Smart Design was asked to restore the words to a prominent position in the logo, which now had the original “NYC” and “AXI,” flanking a shrunken version of the T in a black circle.

Bump No. 3 occurred when NYC & Company, the city’s official marketing and tourism organization, unveiled its own NYC logo, a bulky ligature designed by Wolff Olins. “A number of agencies have incorporated it,” said Matthew Kelly, a spokesman for the Bloomberg administration. “That consistency is good from a customer service perspective and we plan to continue broadening its use.” With that, Wolff Olins’s NYC was substituted for Smart Design’s NYC. And the new taxi logo was born.

If Mr. Stowell is disappointed in the hybrid result, he doesn’t let on publicly. Speaking of the mission to elevate the design quality of the yellow cab, he said, “I still feel good that we raised the bar significantly from where it was.”

Following are the taxi logo critiques from eight designers invited by the NY Times to critique:

“I think the content is all very sound and I agree with virtually every decision made in the editing and organization of the fare panel, from the elimination of the headline TAXI FARE (it is on a taxi, after all) to the simplification of the fare structure. “I have to admit, the form is more of a problem for me. I am a little confused by the overall aesthetic of the new graphic, which seems to be intentionally crude and lumpy, more Checker than Crown Vic, I guess. There is also a blunted trailing off of the other checker pattern which seems particularly halfhearted to me. And that attempt to combine the NYC logo which is being used elsewhere with T in a circle (why?) and that (again) bluntly rounded off and oddly-spaced A-X-I just seems a little ham handed. Maybe it looked good on paper, but I don’t find it convincing on the side of a cab. “For all that, though, these are all deliberate decisions. So someone clearly designed it, which is a cause for applause.”

“I think that an essential aspect of New York is the brutal juxtaposition of the rough and the smooth, the professional and the amateur. The yellow cab was always the perfect embodiment of that sensibility: it was an essentially an open-source, D.I.Y. corporate identity in that almost any four-doored car, simply painted yellow and stenciled on the door, could became an integral part of the whole. The beauty of the system was its almost ridiculous simplicity. This attempt to professionalize the image of taxi ends up just another incongruous element in a system that defies professionalization. “Any attempt I made to do it would suffer the same fate. I would just bring back the stencil.”

“First impressions: I like the fact that they are trying to make the T in a circle an emblem of some kind. A bit like the subway signs. Would be a good move to have something simple that you could just see for one second on the move and think, ‘Taxi.’ “Having said that, there could be some misunderstanding when the Second Avenue subway line opens. That line will use the letter T. Maybe not a problem but maybe something to look into.

“The first thing that I saw when looking at the new logo was ‘NYC AXI.’ The T got lost somehow. The T and AXI are too separated for my taste. The NYC letters seem a bit to bold and straight and not in line with the rest. NYC is sharp and pointy. T AXI is smooth and soft. I know that NYC is some official New York City logo but I don’t think it goes well with the T AXI type. Maybe the idea is that T AXI drives smoothly through the rough city. But all of this makes the whole thing a bit complicated.

“I see on the Smart Design Web site that the NYC type was different from what is used now. I’d guess they changed it due to some New York brand issues but in my opinion the NYC TAXI looks better as it is on their site. “Conclusion: I’d go with something simple. Maybe a typographic solution with some hint of the new NYC logo embedded.“In my opinion, you don’t need to have the NYC logo on the cars as well to make something that should be simple more confusing. A simple type that you read instantly and the yellow cars should be iconic enough.”

“A few observations about the official logo from a designer’s p.o.v.: “It’s really three parts that don’t relate, either conceptually or formally (or spatially or typographically). “The central T is obviously a reference to the subway — too obviously if you ask me — but that is strategically a mistake, as the T.L.C. is separate from the M.T.A. Why equate them visually?

“To have the ‘NYC’ touch is, to me, poor craftsmanship, especially with such a blocky typeface. Additionally, as this goes whizzing by, clumped-together letters just get clumpier. “Having said that, my first reaction to this was, ‘There’s a logo for the taxis?’ In fact, the logo is a secondary element in the branding of the taxis — I imagine very few notice the logo but everyone knows what the yellow signifies. I’d even say that the Crown Vic is a more powerful brand identifier (in the parlance) than whatever logo they had or adopted.”
you can see Mr. Potts Alternative designs here.

Jonathan Corum, a graphics editor at The New York Times

“New York City taxis have long displayed three pieces of information: a list of fares, the words ‘NYC TAXI’ and the medallion number. “The most prominent feature of the new design is a large, awkward ‘NYC (T)AXI’ — everyone knows it’s a New York City taxi, so there’s no need to shout it. There’s also no need to have every taxi look the same.

“My proposed redesign would highlight the most important piece of information: the medallion number. Encouraging riders to remember (or at least notice) the number of their cab is a simple and cheap public safety measure, and would likely speed the return of lost property. A large medallion number would also be much more legible at a distance, or when the cab is moving.”

“The new NYC TAXI logo is ugly and unsuccessful. Before I get to why, however, we should all be grateful that none of its many contributors ­ Smart Design, the Taxi and Limousine Commission or New York & Company and their designers at Wolff Olins considered changing the taxi’s signature yellow color. The reason cuts to the heart of what actually constitutes a taxi’s ‘identity’ and what doesn’t. An identity is something we use to identify something out in the world. McDonald’s golden arches help us to identify the fast food chain from the highway. The fact that it’s a McDonald’s of Greater Cincinnati isn’t really part of its identity. We probably know we’re in Cincinnati and all we care about is getting something to eat.

“The idea of a logo for NYC TAXI fails along the same lines. It’s an NYC TAXI because it’s yellow and we hail it in New York. It’s not an NYC TAXI because it says NYC TAXI on it, no matter what form those letters might take. Many designers, if faced with this brief, would question the need for this particular logo in the first place. The logo probably matters more to the Taxi and Limousine Commission as a sign of driver compliance than it does to people hailing a cab. It’s secondary to the customer’s experience, so its placement, size, and form should indicate as much.

“Still, the logo exists, and merits a more visual critique. Its committee of designers must have discussed the legibility of the logo from across the street moving at high speeds, and they have seemingly addressed this problem by making the letters NYC TAXI bolder. Here the new logo fails again. The design of highway signage has shown that legibility from a distance depends on the spaces inside letters remaining as open as possible. The upper floor of an A or twin bowls of a B shrink as we move further back and continue to shrink as these letters are made bolder. In the worst case, letters become more like blobs, each indistinguishable from the next, and this happens to a certain degree in the NYC TAXI logo.

“What helps us find bold text in a field of unbolded text is the change in tone from light to dark. On highway signs and taxicab liveries, where there are very few words and none of them unbolded, boldness doesn’t help­ it hurts. The yellow color is bold so the letters in the logo needn’t be.”

to read the article in its’ entirety, click here.