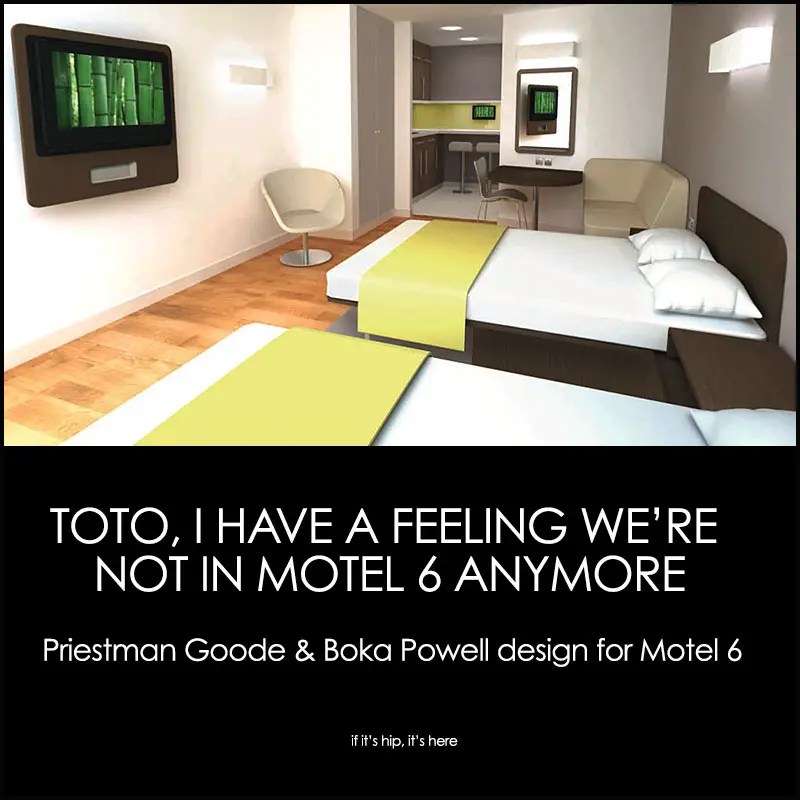 The Motel 6 Phoenix Prototype Hotel with rooms designed by Priestman Goode and exterior designed by Boka Powell updates the look of the hotel chain with modern, streamlined functional design. Motel 6, known for offering a clean, comfortable room for the lowest price of any national chain, is reinventing the economy lodging experience with the announcement of its first new prototype in 12 years. Accor North America, one of the nation’s largest hotel owner/operators and the parent company of Motel 6, today unveiled the Motel 6 “Phoenix” prototype. The Phoenix prototype, named after the mythical bird symbolizing rebirth and renewal, signifies the reinvention of Motel 6 and the re-establishing of its position as the uncontested leader in price value in the economy segment. True to the spirit of Motel 6, the new design is simple, functional and straight to the point.

Priestman Goode of London designed the room (after winning a competition and with input from guests and franchisees) to optimize the use of space by combining multiple functions into a single piece of furniture to provide modern functionality. Major features of the Phoenix prototype include a new building exterior designed by BOKA Powell,(who designed accor’s headquarters in texas) a spacious lobby with a new 24-hour food and beverage vending market place, and a modern guestroom design that features bright accent colors. The room includes ambient lighting, wood-effect flooring rather than carpet, and a 32-inch flat-screen TV. The flat screen TV is displayed on the entertainment unit which conceals the door-less wardrobe behind it, thus combining two needs into one unit. Also included on the entertainment unit is a cubby for personal items and a multi-media panel allowing guests to plug in their mp3 players, CD players and laptop computers – this feature allows guests to listen to their favorite tunes or use the flat-screen TV as their computer monitor while enjoying Wi-Fi internet access in their room. above: The “table for two” is situated in the corner of the room with a design that encourages and allows for interaction between guests, whether during meals, discussions or games. above: The bathroom features double doors, black granite counter top with a vessel/raised sink and a walk-in shower that includes a molded seat for comfort and convenience. The bathroom features a large vanity area with a bright decorative towel cubby on the wall that adds extra accent lighting.

Upon entering the room the guest is greeted by a short corridor, leading into the open space of the room. The bathroom is situated off of the entrance corridor, and for added privacy all of its elements are separate from the rest of the room. The feel of the bedroom is bright and airy due in large part to the minimal furniture that, by design, seems to float in the space. The pedestal bed allows for storage of luggage under the bed and allows for easy cleaning access and visibility.

“This design embodies the heart of Motel 6 – it’s no-frills, uncomplicated and efficient with a new modern edge,” said Jim Amorosia, president and COO of Motel 6 and Studio 6. “The Phoenix prototype offers the best of both worlds – an upscale feel at the lowest price of any national chain.” Above: Boka Powell’s offices for Accor’s headquarters in Texas.

After a design competition, the Phoenix prototype design by Priestman Goode was chosen based on input from franchisees and guests. The first Phoenix prototype will be a corporate-owned location, and construction will begin in the latter half of 2008. The new prototype will be available to franchisees in the summer of 2009. Future plans call for many current Motel 6 corporate properties to be retrofitted with elements of the new prototype.

Motel 6 rooms over the years: Getting A Handle On Design With Valli & Valli and FSB. Door Handles By Famous Architects and Designers.

The Vascabarca-Barcavasca Tub. No Lifejackets Required.

Modern Villa in Stuttgart Centers Around A Twisted Staircase (35 Photos)