In a letter to the American people, Treasury Secretary Jacob J. Lew today announced plans for the new $20, $10 and $5 notes, with the portrait of Harriet Tubman to be featured on the front of the new $20 bill.

Harriet Tubman was born into slavery. After she escaped, she became a conductor on the Underground Railroad, helping slaves escape to freedom. above: Harriet Tubman, full-length portrait, standing with hands on back of a chair. Between ca. 1960 and 1875. Photo Credit: Library of Congress

During the Civil War, she was active in the Union cause, serving as a nurse, a cook, and a scout, gathering intelligence.

Looking back on her life, Harriet Tubman said, “I would fight for liberty so long as my strength lasted.” After the war, she supported the cause of women’s suffrage and was active in suffragist organizations. She died in 1913 and was buried with military honors. 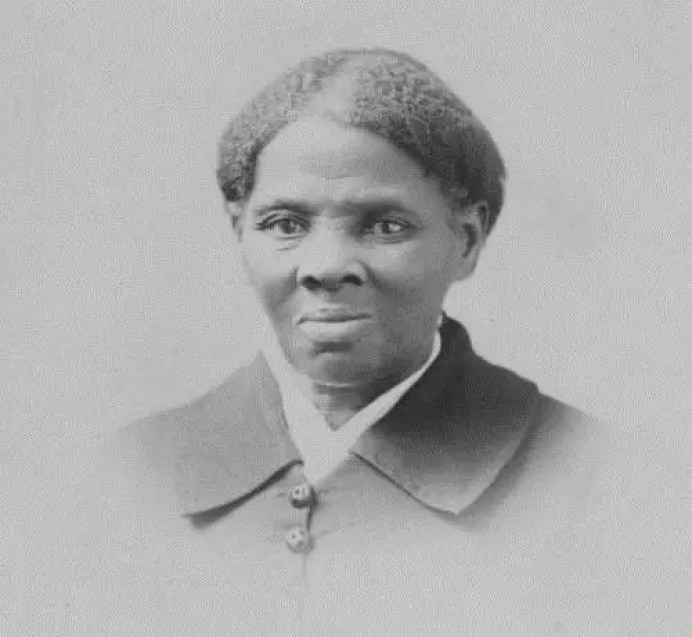 Secretary Lew also announced plans for the reverse of the new $10 to feature an image of the historic march for suffrage that ended on the steps of the Treasury Department and honor the leaders of the suffrage movement—Lucretia Mott, Sojourner Truth, Susan B. Anthony, Elizabeth Cady Stanton, and Alice Paul. The front of the new $10 note will maintain the portrait of Alexander Hamilton.

“I would fight for liberty so long as my strength lasted.” – Harriet Tubman

Finally, he announced plans for the reverse of the new $5 to honor events at the Lincoln Memorial that helped to shape our history and our democracy and prominent individuals involved in those events, including Marian Anderson, Eleanor Roosevelt and Martin Luther King Jr.

The reverse of the new Harriet Tubman 20 Dollar Bill will feature images of the White House and President Andrew Jackson. 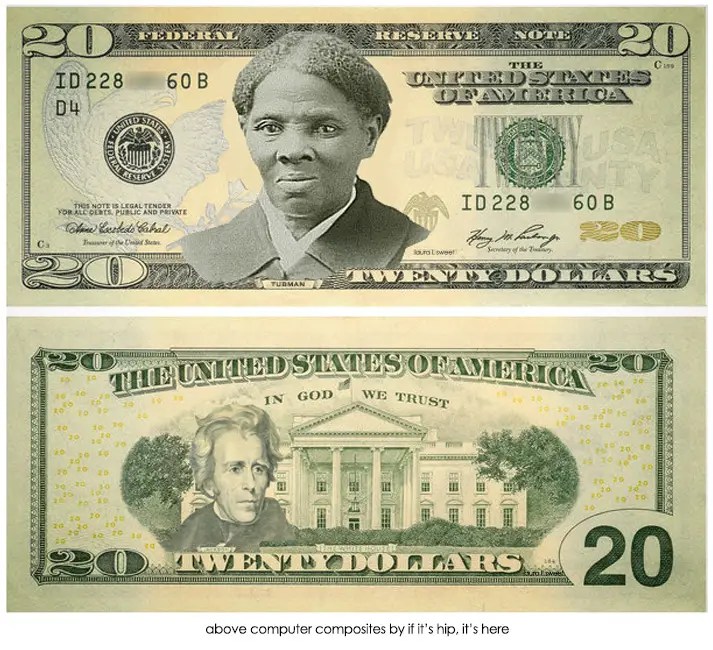 In his letter (shown in full below), Secretary Lew noted that the Bureau of Engraving and Printing will work closely with the Federal Reserve to accelerate work on the new $20 and $5 notes, with the goal that all three new notes go into circulation as quickly as possible, consistent with security requirements. 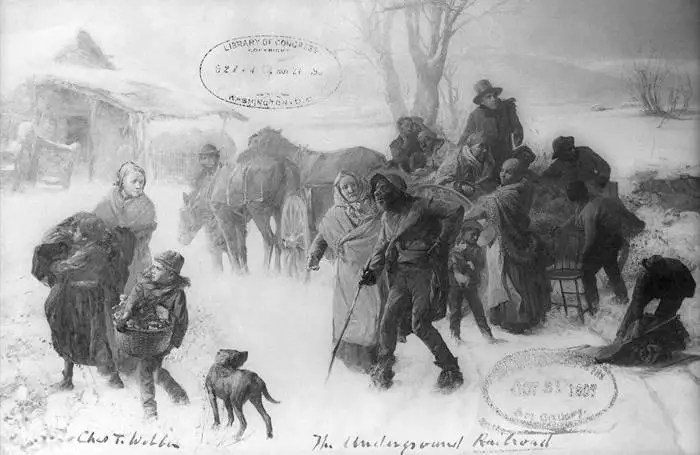 above: Slaves traveled along the Underground Railroad in this painting c. 1893 in the Cincinnati Art Museum by Charles T. Webber. Photo Credit: Library of Congress

When I announced last June that a newly redesigned $10 note would feature a woman, I hoped to encourage a national conversation about women in our democracy. The response has been powerful. You and your fellow citizens from across the country have made your voices heard through town hall discussions and roundtable conversations, and with more than a million responses via mail and email, and through handwritten notes, tweets, and social media posts. Thank you for sharing this thoughtful and impassioned feedback.

Over the course of the last 10 months, you put forth hundreds of names of people who have played a pivotal role in our nation’s history. Many of you proposed that our new currency highlight democracy in action and reflect the diversity of our great nation. Some of you suggested we skip the redesign of the $10 note, which is the next in line for a security upgrade, and move immediately to redesigning the $20 note. And others proposed unconventional ideas, such as creating a $25 bill.

I have been inspired by this conversation and today I am excited to announce that for the first time in more than a century, the front of our currency will feature the portrait of a woman—Harriet Tubman on the $20 note.

Since we began this process, we have heard overwhelming encouragement from Americans to look at notes beyond the $10. Based on this input, I have directed the Bureau of Engraving and Printing to accelerate plans for the redesign of the $20, $10, and $5 notes. We already have begun work on initial concepts for each note, which will continue this year. We anticipate that final concept designs for the new $20, $10, and $5 notes will all be unveiled in 2020 in conjunction with the 100th anniversary of the 19th Amendment, which granted women the right to vote.

The decision to put Harriet Tubman on the new $20 was driven by thousands of responses we received from Americans young and old. I have been particularly struck by the many comments and reactions from children for whom Harriet Tubman is not just a historical figure, but a role model for leadership and participation in our democracy. You shared your thoughts about her life and her works and how they changed our nation and represented our most cherished values. Looking back on her life, Tubman once said, “I would fight for liberty so long as my strength lasted.” And she did fight, for the freedom of slaves and for the right of women to vote. Her incredible story of courage and commitment to equality embodies the ideals of democracy that our nation celebrates, and we will continue to value her legacy by honoring her on our currency. The reverse of the new $20 will continue to feature the White House as well as an image of President Andrew Jackson.

As I said when we launched this exciting project: after more than 100 years, we cannot delay, so the next bill to be redesigned must include women, who for too long have been absent from our currency. The new $10 will honor the story and the heroes of the women’s suffrage movement against the backdrop of the Treasury building. Treasury’s relationship with the suffrage movement dates back to the March of 1913, when advocates came together on the steps of the Treasury building to demonstrate for a woman’s right to vote, seven years prior to the passage of the 19th Amendment. The new $10 design will depict that historic march and honor Lucretia Mott, Sojourner Truth, Susan B. Anthony, Elizabeth Cady Stanton, and Alice Paul for their contributions to the suffrage movement. The front of the new $10 will continue to feature Alexander Hamilton, our nation’s first Treasury Secretary and the architect of our economic system.

The reverse of the new $5 will depict the historic events that have occurred at the Lincoln Memorial. In 1939, at a time when Washington’s concert halls were still segregated, world-renowned Opera singer Marian Anderson helped advance civil rights when, with the support of First Lady Eleanor Roosevelt, she performed at the Lincoln Memorial in front of 75,000 people. And in 1963, Martin Luther King, Jr. delivered his historic “I Have a Dream” speech at the same monument in front of hundreds of thousands. Honoring these figures will bring to life events at the Lincoln Memorial that helped to shape our history and our democracy. The front of the new $5 will continue to feature President Lincoln.

Due to security needs, the redesigned $10 note is scheduled to go into circulation next. I have directed the Bureau of Engraving and Printing to work closely with the Federal Reserve to accelerate work on the new $20 and $5 notes. Our goal is to have all three new notes go into circulation as quickly as possible, while ensuring that we protect against counterfeiting through effective and sophisticated production.

This process has been much bigger than one square inch on one bill, and along the way, we heard about countless individuals who contributed to our democracy. Our website, modernmoney.treasury.gov, will highlight many of the names that we heard throughout this process, and help tell some of the many stories that inspired us. Of course, more work remains to tell the rich and textured history of our country. But with this decision, our currency will now tell more of our story and reflect the contributions of women as well as men to our great democracy.

Everything You Need To Know About The New Apple iPhone X