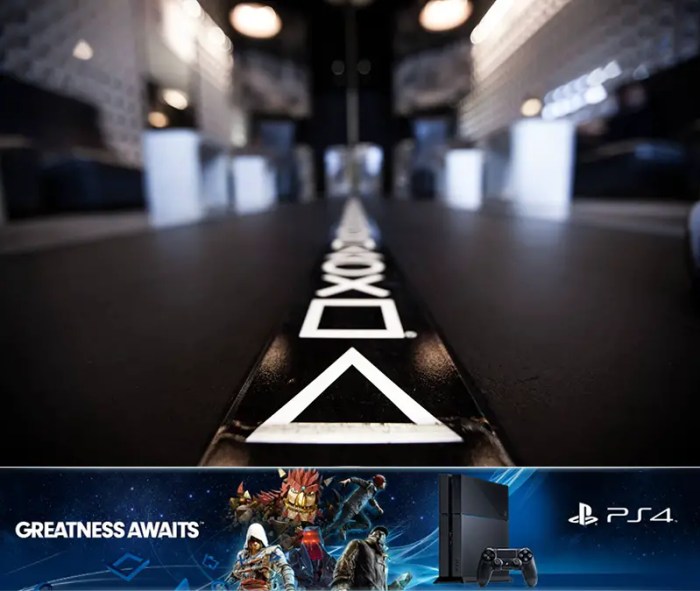 Today’s Event:
As part of the PS4 launch, the Standard High Line in NY has been taken over by PlayStation beginning this morning at 9am, where they lit up the hotel with PS4 game images and icons and are offering some for purchase, demos and more. A follow-up to the widely popular PlayStation 4 trailer from last June, this wonderful PS4 commercial by BBH New York coincides with the launch of Sony’s “Greatness Awaits” website.

In this one minute ad, two young men role-play battle via scenes from the Elder Scrolls Online, Driveclub and Killzone: Shadow Fall, all to the tune of Lou Reed’s “Perfect Day.”

The song is a wonderful juxtaposition to the battle scenes, and serves as a nice tribute to the recently deceased music legend (full credits at the end of this post).

The Greatness Exchange allows players a shot at winning items used in the latest PlayStation commercials amongst other thing:

First there was Bid For Greatness, rewarding the greatest gamers around. But what about everyone else? All you need is one gold trophy to take your shot. Winners randomly selected and verified. Trophies are not lost from your PSN profile.
Introducing Greatness Exchange.

Furbo Will Do Everything For Your Dog But Rub Its Belly.

LIFX Lights Up Your Home Via Your Smart Phone (and a discount code, too).