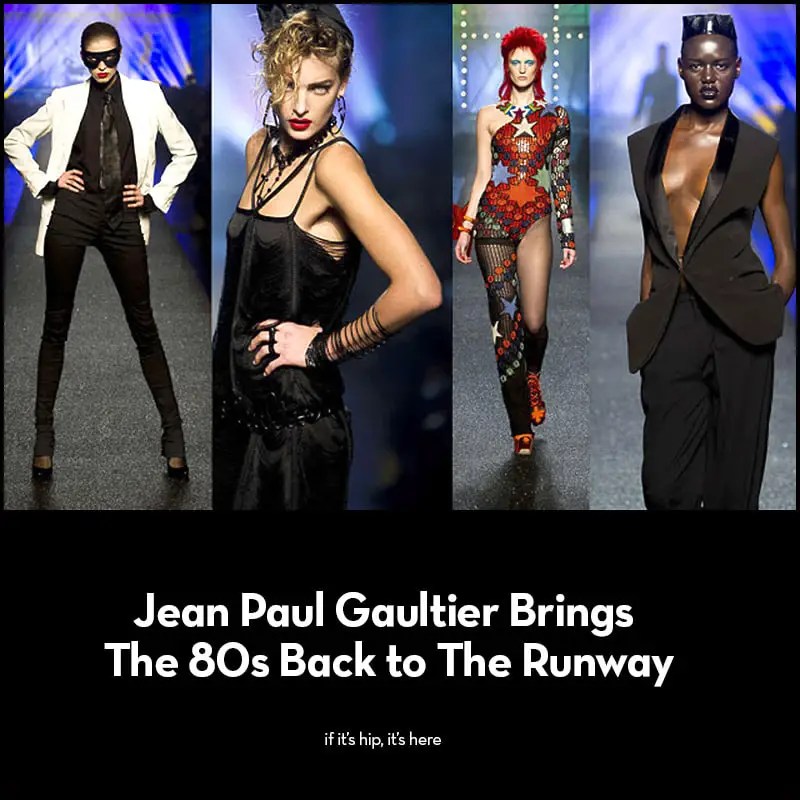 As the latest Ready-to-Wear collection by fashion designer Jean Paul Gaultier walked down the runway during Paris Fashion Week, some might have felt they were tuning into MTV circa 1984. Inspired by eighties Pop singers who have influenced fashion over the past three decades, Gaultier presented various pieces ranging from tuxedo styled pantsuits to corsets and fishnets, accompanied by era-appropriate music such as Bowie’s 1980 hit “Fashion” and Madonna’s “Vogue” Nods to The Culture Club (Boy George) with Japanese-like flowing kimonos and David Bowie a la Ziggy Stardust circa 1972 with glitter platforms marched down the runway: …along with androgynous and beautifully tailored suits reminiscent of both Grace Jones and Annie Lennox: The Material Girl (Madonna) was fully represented in looks harkening back to her 1985 movie, Desperately Seeking Susan and Michael Jackson’s fedora, glove and jackets were made an appearance as part of the Spring 2013 collection. Satin and leather baseball jackets and matching knickers brought up flashbacks of ABBA and Amanda Lear made a cameo appearance as the show came to a close. The hair, make up and styling deserves a bow as well, that’s for sure.

5 Years Later, A Look Back At The Weirdest Michael Jackson Moments.