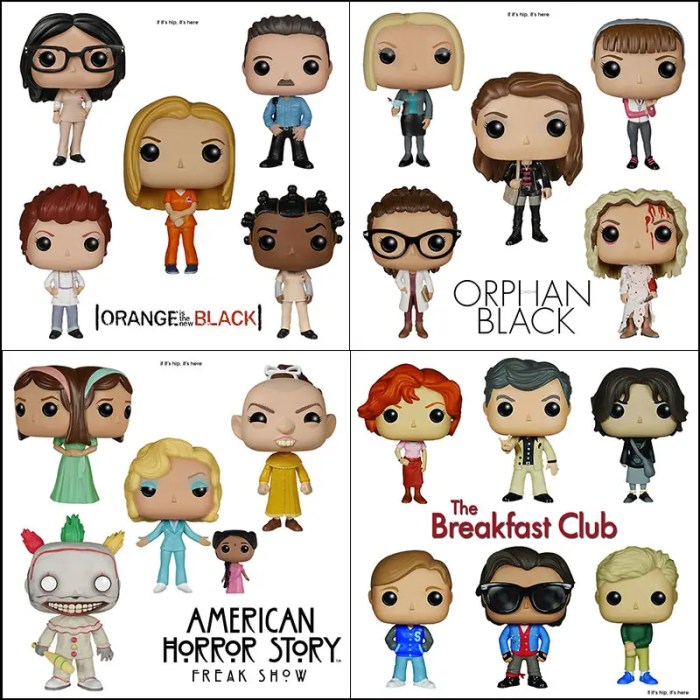 The latest releases from Funko in their ever-growing line of Pop! Vinyl collectibles capitalizes on some of the best of today’s television programs and brings back some of our favorite characters from 80s movies. This month, TV characters from the BBC America’s Orphan Black, Doctor Who, Netflix’s Orange Is The New Black, FX’s American Horror Story have been introduced along with nostalgic movie favorites The Karate Kid, The Breakfast Club and Sixteen Candles.

If you don’t know what POP! Vinyls are, you are sorely out of touch. Funko’s POP! Vinyl is the number one stylized vinyl collectible in the world with over 10 million units sold in the last three years- and growing. The miniature vinyl figurines with oversized heads and large eyes as their most prominent facial feature are fashioned after the most beloved, the most bad-ass and the most bizarre characters in pop culture.

The company has licenses with just about everyone; Disney, Marvel, Hasbro, Star Wars, NFL, Sanrio and DC Comics are but a few of the over 150. For the cult film fanatics, TV lovers and Gamers, they’ve quite a range that most likely includes your favorites. 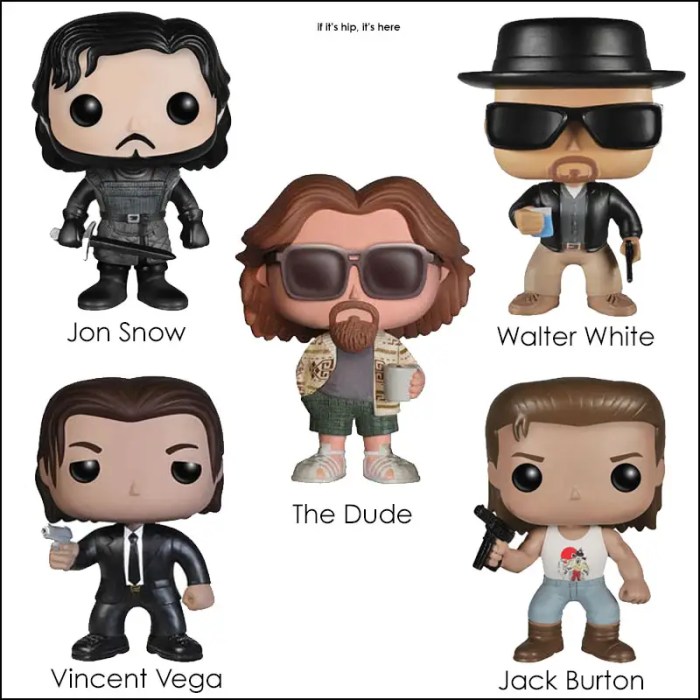 Initially when I would come across these they were usually the characters you’d find in… well, just about everything; Mickey Mouse, Bart Simpson, Batman, Darth Vader, A Disney Princess, A Minion and the like. So, I ignored them.

Then I noticed Funko’s introduction of the Game of Thrones Pop Vinyl Collection. I began to take notice. These just weren’t Super Heroes and My Little Ponies (but they have those, too). They were anti-heroes and villians. A little darker and a little less mainstream such as the characters from Big Trouble in Little China,  Pulp Fiction, Breaking Bad, and The Big Lebowski.

For those of us who remember the 80s, beloved childhood movies like The Karate Kid and John Hughes’ faves Sixteen Candles and The Breakfast Club have their own Funko Pop Vinyls available for pre-order now.

THE BREAKFAST CLUB
The 1985 American coming-of-age comedy-drama film written, produced, and directed by John Hughes follows five teenagers, each a member of a different high school clique, who spend a Saturday in detention together and come to realize that they are all more than their respective stereotypes, while facing a villainous principal. Just released are Pop! Vinyls of the film’s five main actors referred to in the media as the “Brat Pack” and the high school’s Principal. BUY THEM:
Available individually here on Amazon or for an even better price of $9.99 each here

SIXTEEN CANDLES
Who could forget the teen angst of Molly Ringwald’s Samantha Baker in John Hughes’ coming of age story SIXTEEN Candles. Here she is, her hottie crush Jake Ryan, Ted (The Geek) and of course, Long Duk Dong. BUY THEM:
Available as a set of all four here , individually here on Amazon or for an even better price of $9.99 each here BUY THEM:
Available as a set of all 3 or individually here on Amazon or for an even better price of $9.99 each here

BUY THEM:
Available as a set of all 5 or individually here on Amazon or for an even better price of $9.99 each here

BUY THEM:
Shop for the Orphan Black pop! Vinyl Figures here on Amazon or for an even better price of $9.99 each here BUY THEM:
Shop for Season 3 Coven Pop! Vinyl Characters here on Amazon or for an even better price of $9.99 each here

Season 4 – Freak Show
The characters from this series are a reminder that life is a carnival. The collection includes the macabre Twisty the clown, Pepper the pin head, whose intelligence was augmented during her supposed alien abduction, the Tattler Twins and of course, the incomparably dubious Elsa Mars and her assistant Ma Petite, the world’s smallest woman. BUY THEM:
Shop for Season 4 Freak Show Pop! Vinyl Characters as a set of all 4 here or for an even better price of $9.99 each here

Shop for ANY of the American Horror Story seasons Pop! Vinyl Collectibles here on Amazon.

DOCTOR WHO
And now, some of the fabulous new Doctor Who Pop Vinyls which have just arrived!