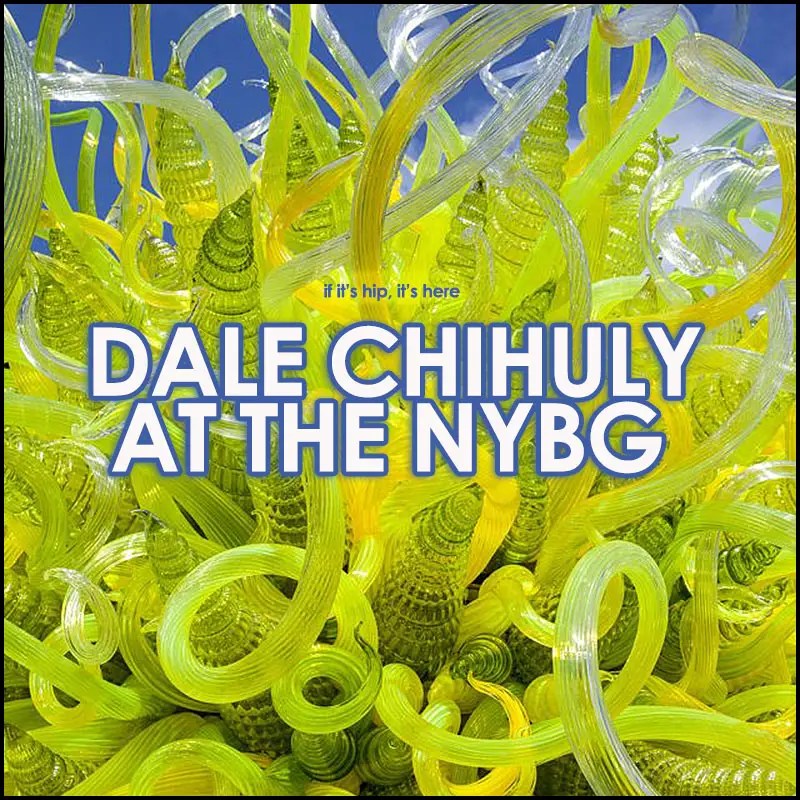 The New York Botanical Garden has become even more colorful and breathtaking thanks to more than 20 art installations by world-renowned glass artist Dale Chihuly. Beginning Saturday, April 22, 2017 and running through Sunday, October 29, 2017, this sensory-filled exhibition at NYBG is a must-see throughout the changing seasons from spring through fall.

It’s been eleven years since Dale Chihuly’s landmark 2006 exhibition at the New York Botanical Garden, which was his first in the city. Now, in his first major garden exhibition in New York in more than ten years, CHIHULY is showcasing more than 20 installations, drawings and early works that reveal the evolution and development of his artistic process during his celebrated career. And we have photos for you of all of them! Located in the Arthur and Janet Ross Conifer Arboretum is the Sapphire Star, composed of hundreds of spires, a form that Chihuly originally developed in the late 1990’s for a project in his native Pacific Northwest. In this sculpture, each element changes from a rich opaque blue at its base to clear at its tip. This intentional application of color creates the dense blue core and radiant effect of Sapphire Star.

Red Reeds on Logs in the Reflecting Pool Red Reeds on Logs comprises wood logs collected from the grounds of The New York Botanical Garden and dozens of blown glass reeds. Displayed in groups, the reeds appear as plants in the landscape, standing out in bright red against the green backdrop of the Garden landscape. The slender forms of the tall reeds also contrast with the irregular forms of the logs from which they appear to emerge.

While the idiosyncrasies of glassblowing prohibit any two shapes to be exactly the same, Sol del Citron is composed of disparate forms that all come together in one multifaceted artwork. Look closely at each individual piece and then take in the entire sculpture to really experience the overall effect.

“Glass itself is so much like water. If you let it go on its own, it almost ends up looking like something that came from the sea. ” – Dale Chihuly Among the singular sights is a monumental re-imagination of his storied 1975 installation at upstate New York’s Artpark: three new works — Koda studies — enliven the water features of the Native Plant Garden and the Enid A. Haupt Conservatory Courtyard’s Tropical Pool, reflecting the interplay and movement of color and light. In 1975 Chihuly and fellow artist, Seaver Leslie, were invited to create a temporary, site specific land art installation for Artpark, a multidisciplinary arts venue in Lewiston, New York. They arranged stained, blown glass panels individually, in pairs, and in colorful grids—along the shoreline of the Niagra River and among rock outcrops in the landscape. 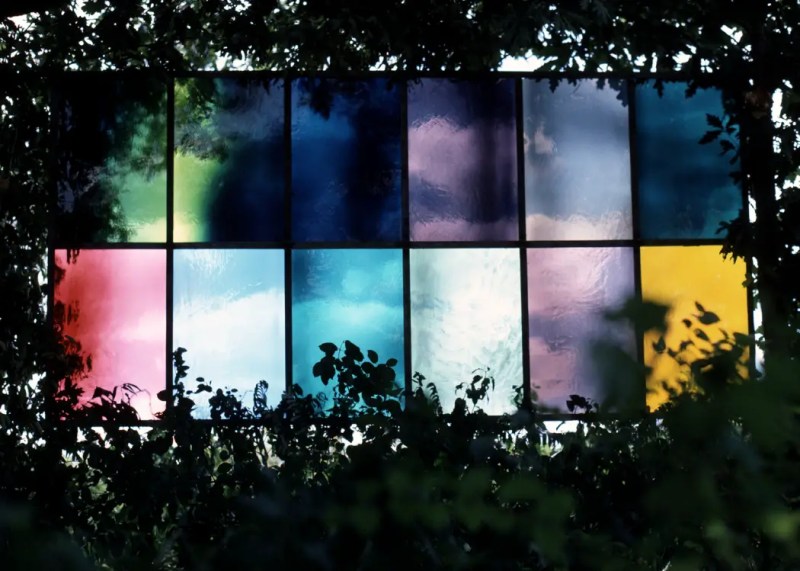 More than 40 years later, Chihuly revisits this project in his Koda Studies, inspired in part by the unique landscape of the Native Plant Garden at The New York Botanical Garden. Once again, Chihuly explores light and color, today in the dramatic surroundings of a modern water feature through the use of minimalist panes arranged in grids. 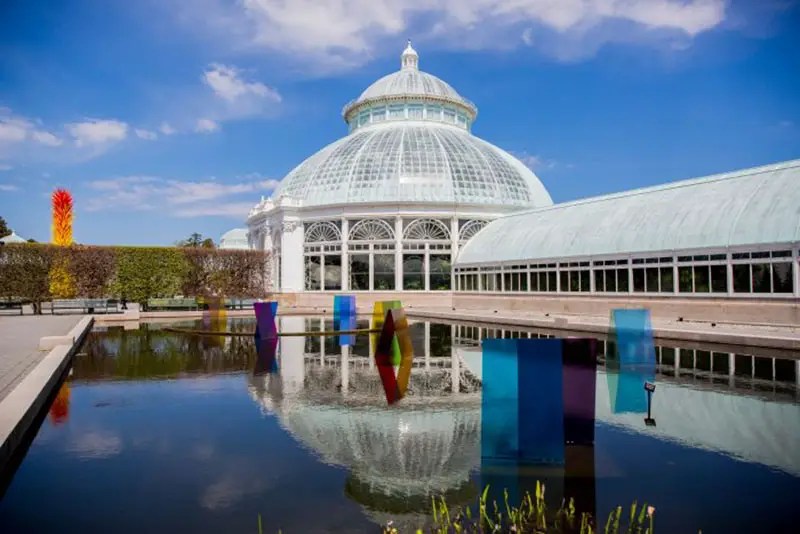 Chihuly was invited to create a temporary, site specific land art installation for Artpark, a multidisciplinary arts venue in Lewiston, New York, in 1975. Together with his collaborator, artist Seaver Leslie, Chihuly placed glass in the landscape, situating multicolored panes of glass in the landscape. Single panes, pairs, and even large-scale window-like grids were all employed in an ephemeral installation that changed as the artists relocated the panels or glass—situated in the landscape and exposed to the elements—broke apart. More than 40 years later, Chihuly revisits this project and his interest in minimalist exploration of color and light in the landscape in his Koda Studies, reimagined for the unique surroundings of The New York Botanical Garden.

Float Boat
Chihuly has always worked and lived near water. He has found it an essential source of inspiration in the development of his art as well a setting in which to exhibit his work. Here in Float Boat, multicolored Niijima Floats fill a rough-hewn wooden boat evocative of a traditional fishing boat. Chihuly developed his now iconic Boat installations while in Nuutajärvi, Finland preparing for Chihuly Over Venice. There, he threw glass into the nearby river to see how it would react. The artwork would then be gathered and returned in wooden skiffs similar to the one seen in this installation. 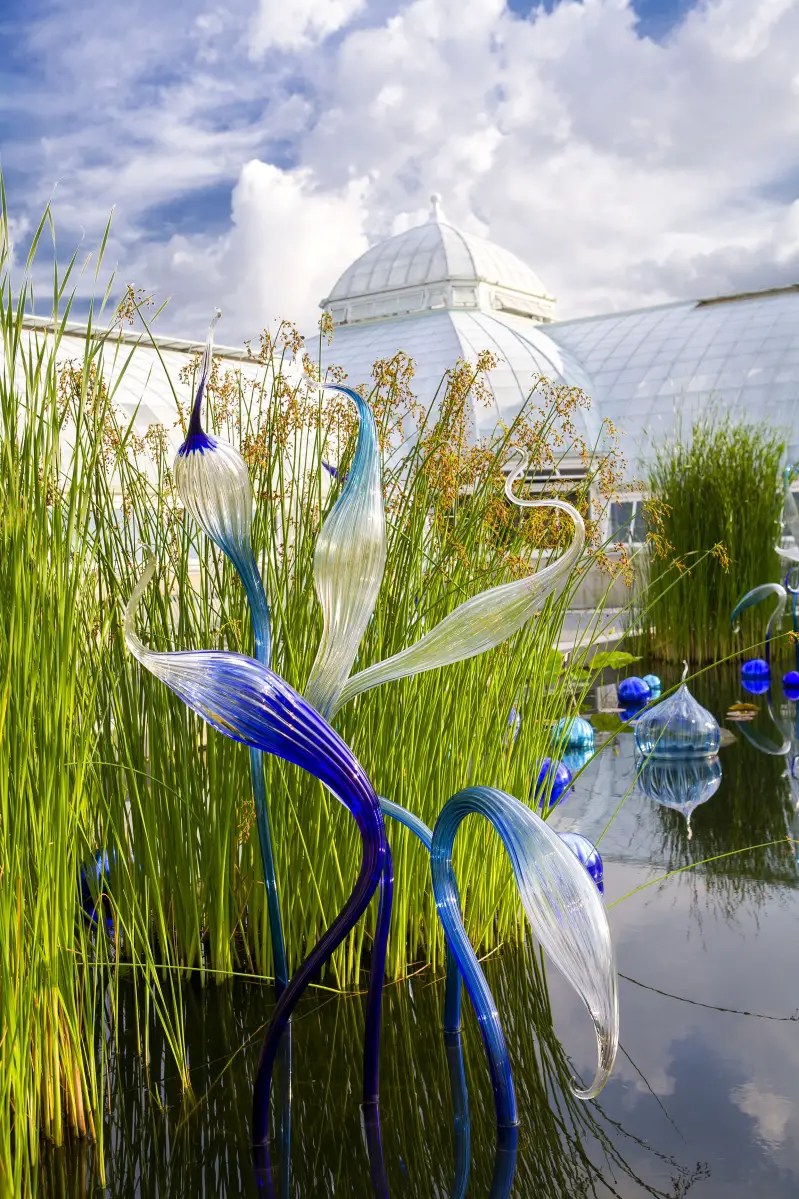 In an homage to the 2006 exhibition at NYBG, Chihuly’s Blue Herons (above), originally in the Tropical Pool, are showcased in a new display entitled Persian Pond and Fiori within the Haupt Conservatory, itself considered a work of glass art. The brightly colored forms of Persians resemble whimsical water lily leaves floating on the surface of the water. Individual pieces ranging from 19 to 36 inches in diameter are massed together to make a striking installation evocative of Chihuly’s vision of a fantasy garden. Persians were developed using a technique Chihuly had learned at the centuries-old Venini workshop in Venice, in which a special mold, or “wrap,” is used to create an undulating pattern on the surface of the glass.

White Tower with Fiori
The whimsical White Tower was blown in the Czech Republic in 1997 and exhibited for the first time in 1999 at the Tower of David Museum during Chihuly in the Light of Jerusalem. The White Tower has since been shown in multiple museum and garden exhibitions around the world. It is exhibited here with Pink Trumpets and Cobalt-Pink Spears. Each of Chihuly’s towers are “mocked up” in his studio in Seattle before they travel to their final destination. Chihuly and his team design and compose the sculpture to achieve his desired balance of shape, form and degree of translucency. When finalized and approved each tower is documented before being disassembled and painstakingly packed for shipment to its final destination where it is reassembled by Chihuly’s team. After months of planning and preparation, the Chihuly team assembled White Tower onsite at The New York Botanical Garden in a single day. 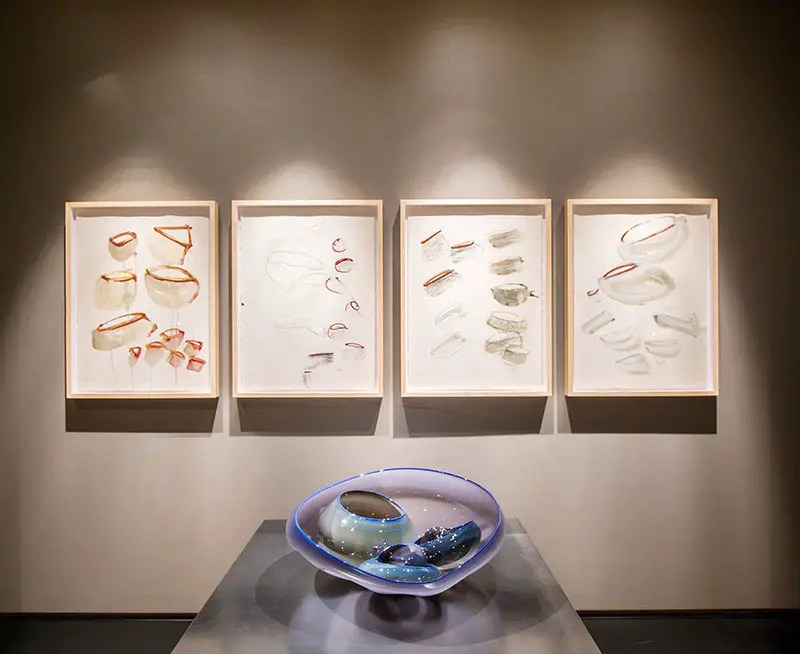 In the Art Gallery of the LuEsther T. Mertz Library, visitors will see an exhibition of Dale Chihuly’s early works, including glass series and works on paper. Drawing and painting on paper have been a consistent form of expression for the artist throughout his career, both as a means of communicating with his team and as their own creative outlet. Palazzo Ducale Tower, a signature installation from the monumental undertaking Chihuly Over Venice (1995-96), is one of the artist’s earliest towers. In its original iteration the Tower was intended to interact with the classical architecture of the Doge’s Palace in Venice, the traditional site of lavish exhibitions of artistry in Venice, arguably the world capital of glassmaking. Surprisingly, these forms are not based directly on specific plants or animals despite their dynamic but ambiguous forms seeming very full of life. The shapes’ dynamism comes from the natural process of blowing glass and interspersing them in the garden gives the appearance that they are themselves fantastical plants. 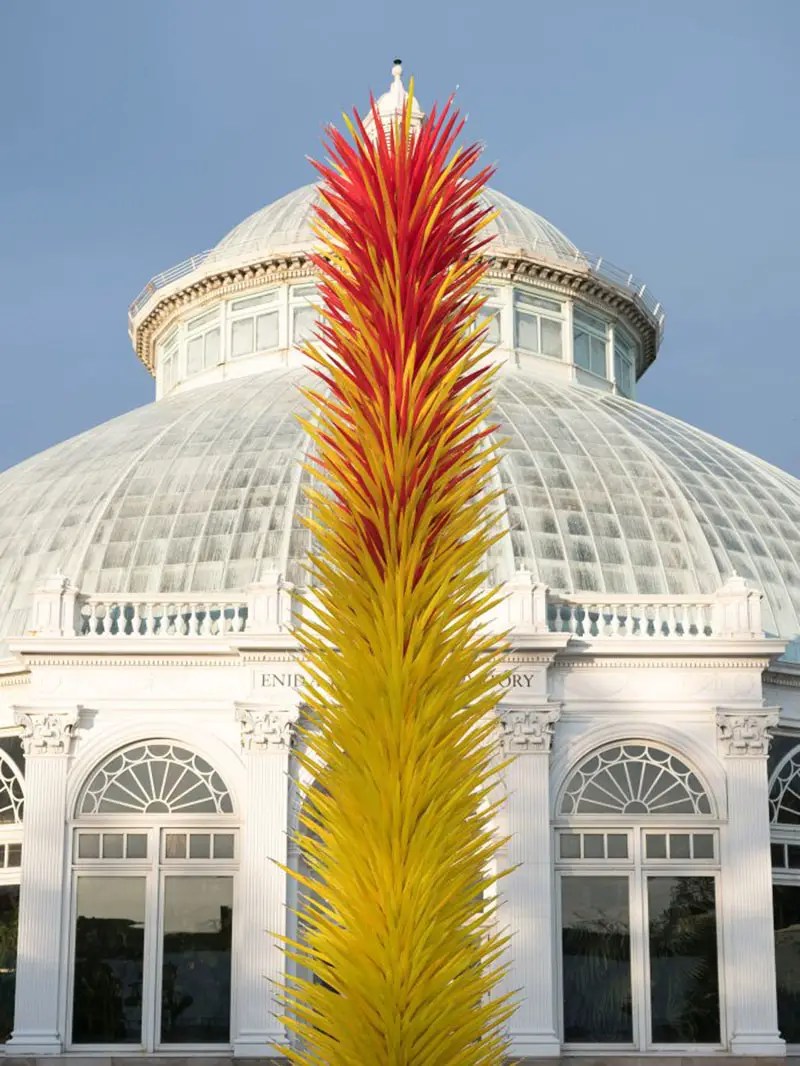 As part of the collaborative process in the studio, Chihuly and his team combines forms of varying colors, shapes, and sizes into his Chandeliers and Towers. Through trial and error, experimental combinations are constructed, deconstructed and adjusted to achieve new effects. Here, Chihuly explores yet another permutations of color and form. Inspired by the frigid temperatures in the Pacific Northwest, the icicle forms are placed onto the tower structure. Yet the icicle, when created in scarlet and yellow, reflects light and emulates a flame. 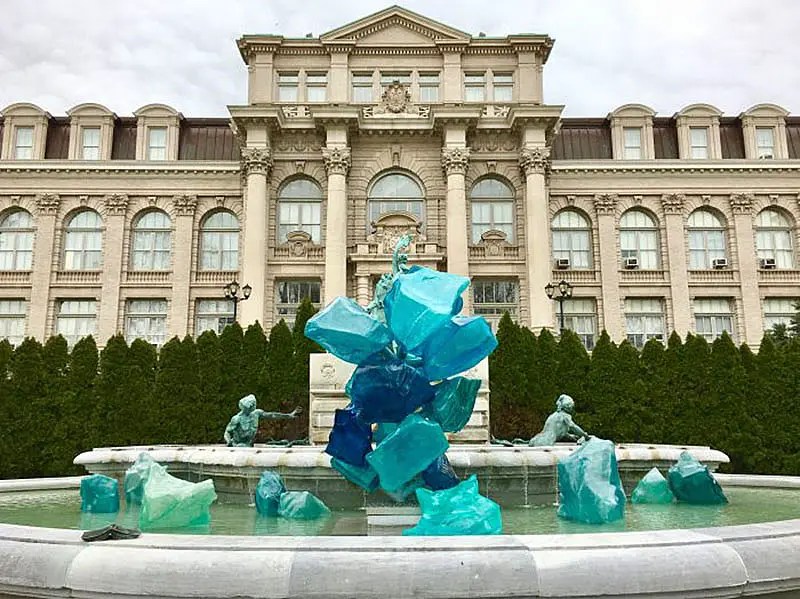 While most of Chihuly’s work on display at The New York Botanical Garden is blown glass, the individual “crystals” that form this installation were created through a rotocasting process in which a polyurethane resin is poured into a rubber mold. The mold is then rotated to ensure that the resin is distributed evenly. Layer after layer of resin is added and then hardened and removed from the mold, resulting in these stunning forms that resemble enormous uncut crystals. Chihuly developed his Macchia series from a desire to push the boundaries of glass as an expression of form and light. During the 1980s the artist experimented with several vessel-like forms, employing new techniques to achieve unusual shapes and color combinations. His desire to employ every color available to him led Chihuly to develop a technique of layering color over a thin layer of white to prevent the vibrant hues from bleeding into one another. He also adopted the practice of fusing colored glass chips to the outer surface of the vessel creating a spotted affect and inspiring the series name, Macchia, which means “spotted” in Italian. Chihuly has often cited his memories of his mother’s lush flower garden as an important inspiration for his color explorations. 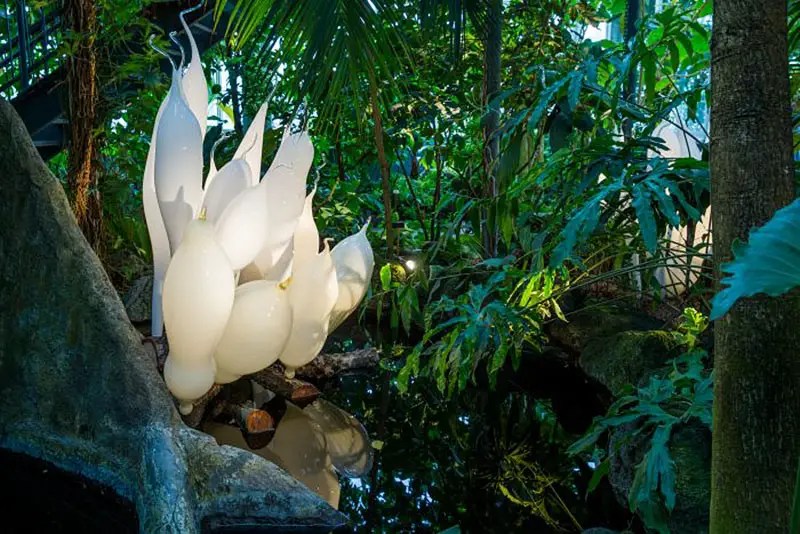 The monochromatic White Belugas appear to grow from the garden bed. The installation combines artwork originally created in Vianne, France in 1997 with newer work blown in Chihuly’s hot shop in Seattle in 2014. 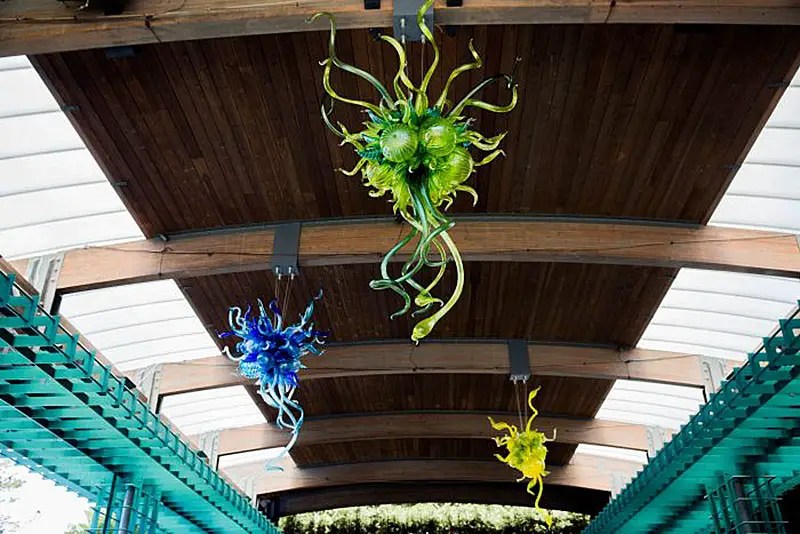 In The Leon Levy Visitor Center are three Chandeliers, which do not actually illuminate. These one-of-a-kind installations highlight the synergy between Chihuly’s organic shapes and the natural environment. The exhibition also boasts a dramatic neon sculpture. As a graduate student in the late 1960s and then as a professor at Rhode Island School of Design, Chihuly pioneered distinctive applications of neon in his early work. This innovation continued into the ’80s and ’90s, leading to the Tumbleweed, a major element in his exhibitions. During Chihuly’s blockbuster show at NYBG in 2006, his first garden presentation in New York City, he further explored his work in the medium with the development of his first Neon Tower. In the Conservatory Courtyard, Chihuly uses the medium again in a new multicolor installation, Neon 206, taking advantage of the iconic venue’s reflective qualities. The guide delivers content to handheld devices that are dynamically customized to the user’s location, transforming how visitors are guided through the exhibition and Garden grounds. Each installation appears as an icon on a virtual map. As visitors approach those installations, the mobile guide will trigger additional rich contextual information about the artwork or the process of its creation. Another feature of the NYBG CHIHULY Interactive Guide will allow visitors to share their own photographed images of the sculptures. Mobile media is generously supported by Bloomberg Philanthropies through its Bloomberg Connects program, a global initiative that helps cultural institutions innovate and engage audiences through digital platforms.

Special weekend celebrations, films, poetry, and fun-filled art programs for kids offer colorful and imaginative tributes to nature. On CHIHULY Nights, the exhibition is infused with a magical energy as the artworks are spectacularly illuminated amid NYBG’s sweeping vistas and magnificent Conservatory.

Chihuly at the NYBG

For more information about Dale Chihuly and his art, please visit chihuly.com

Soccer Balls Don’t Get Much Cooler Than Kube.