Mattel keeps coming out with stunning Barbie dolls, one after another. The latest is the second in their series of dolls inspired by the traditional Mexican holiday known as Day of The Dead or Dia de Muertos. Last year, the first-ever Dia de Muertos Barbie® Doll captured the imagination of collectors all over the world. It was one of Barbie® Signature’s most popular dolls in 2019 – so popular, in fact, that it inspired the start of a new tradition. Today, Mattel has revealed the 2020 edition of the Dia de Muertos Barbie Doll, second in a new collection!

The 2019 Dia de Muertos Barbie® Doll was a runaway hit. It was so well received that Barbie® Signature decided to acknowledge it as the first in an official collection of dolls to celebrate the two-day holiday. 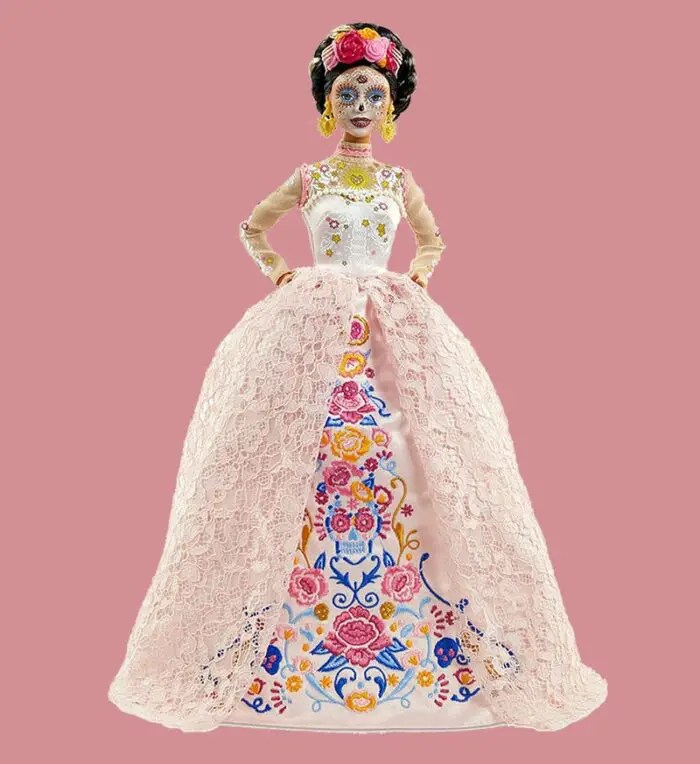 If you’re not familiar with it, Dia de Muertos (Spanish for “Day of the Dead”) is celebrated in early November, when families gather to celebrate the lives of their departed loved ones. This colorful and lively event is filled with music, food, sweets, offerings, and flowers. The Barbie Dia de Muertos series is designed to honor the traditions, symbols, and offerings often seen throughout this time.

Barbie® doll is a vision with her face painted in a captivating Calavera design.”Calavera” is Spanish for “skull,” and this evokes the “Calavera Catrina” depictions seen historically in Mexican artwork. Her blush-colored lace dress is embellished with tiny pearlescent details and opens slightly to reveal a second layer embroidered with floral and skeleton accents. 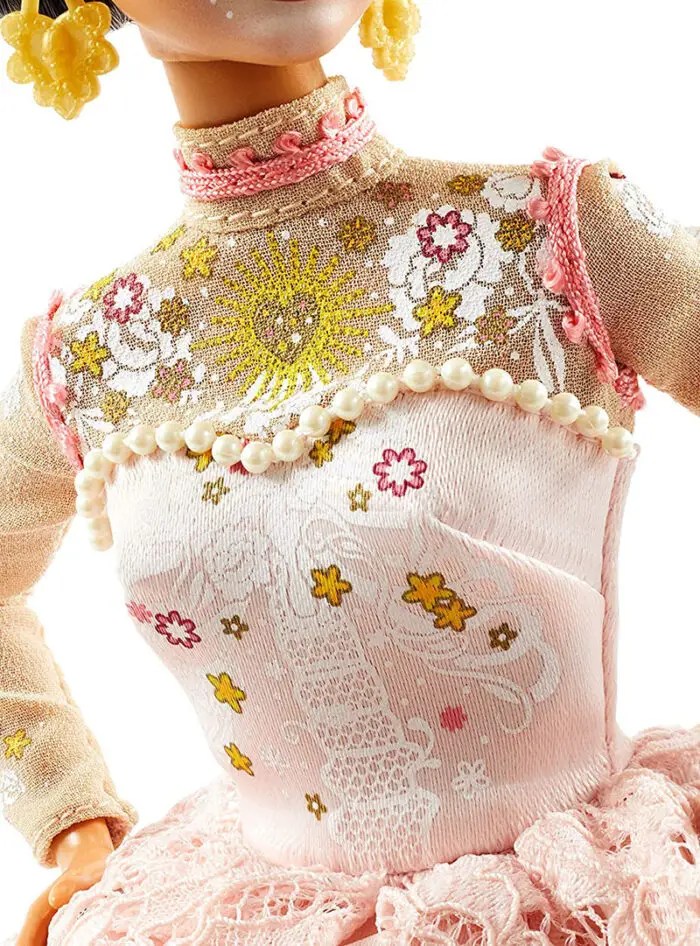 Golden highlights in her hair shimmer beneath a crown of skeleton hands holding roses and marigolds (Marigolds are an especially important flower in this tradition, as their vibrant color and scent are said to help guide spirits to the altars built for them by their loved ones during the holiday.) Designer Javier Meabe says “My hope for these dolls is that they’re able to bring more awareness to the Dia de Muertos celebration. The Dia de Muertos celebration is very important because it honors and pays respect to family and friends that are no longer with us. It is such a beautiful tradition and I love that Barbie is now honoring the Dia de Muertos holiday. I also know how important representation is in our community, and I wanted little girls to see themselves through this doll. Barbie has always been a doll that celebrates women and dreams, and inspires girls. I am beyond grateful that Barbie is now celebrating traditions and cultures that mean so much to so many people.” 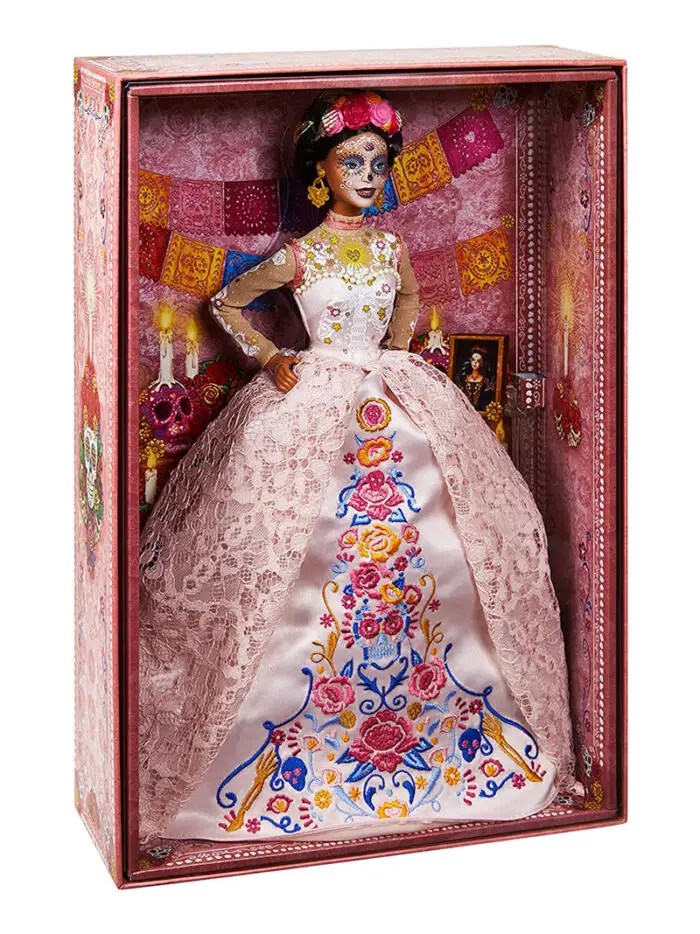 “We wanted to make sure that the second Dia de Muertos Barbie was just as special as the first doll,” Javier says. When asked about his design process, he says, “Research is always the first thing I do before putting my pencil on paper. So, I looked at new elements that we could introduce to the second doll. Adding new textures, fabrics, flowers, and a new dress silhouette were ways to introduce the new elements to the second doll while still keeping traditional elements that are important to the Dia de Muertos celebration. Traditions like marigolds, skeleton details, and Calaveras makeup were elements that I knew we had to keep but introduce in a new way.” 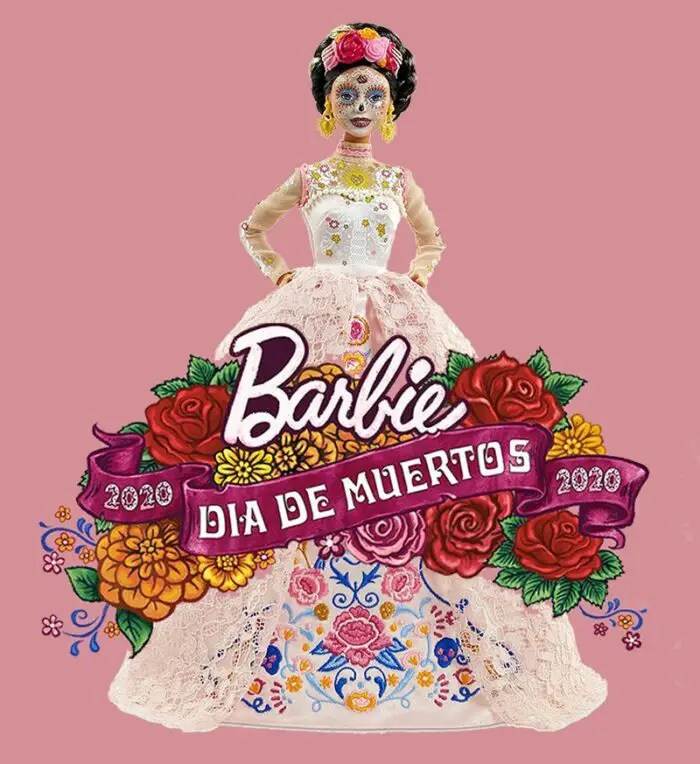 The 2020 Dia de Muertos Barbie® Doll is a Black Label® doll and will retail for $75 in the online shop or here on Amazon. There will be a limit of one (1) doll per person when she debuts, so as many people as possible can add her to their collections. (This limit is subject to change at a later date.) Last year’s doll sold out quickly, so get this year’s doll now!