` The Ballpoint Pen Drawings of Helena Hauss - If It's Hip, It's Here
Skip to content 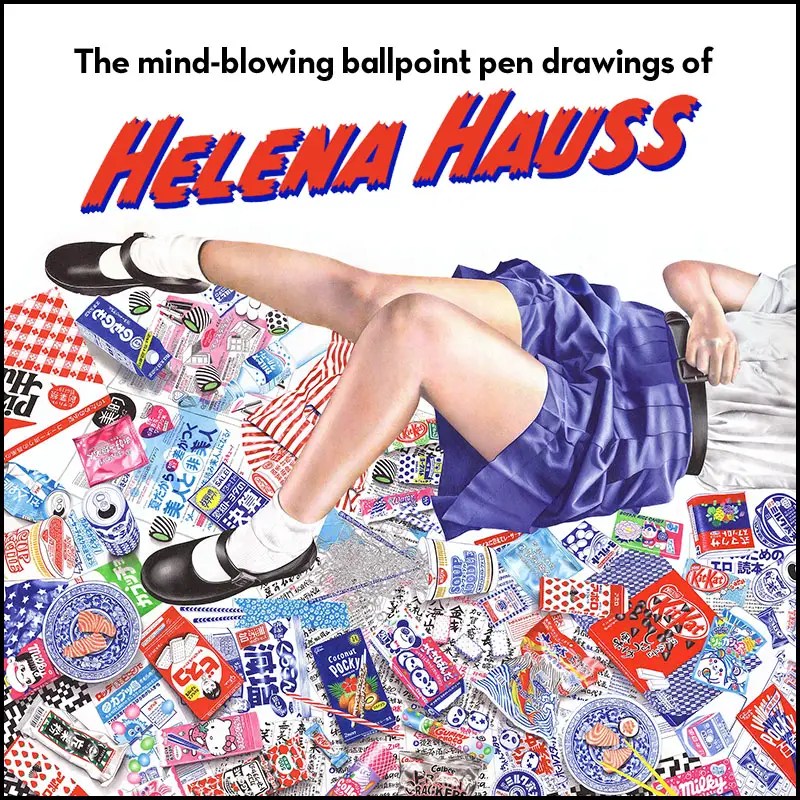 Remember those students who would doodle impressively in the margins of their three hole punch notebooks with a ballpoint pen? One of those talented folks was probably Helena Hauss. Exploring themes such as innocence lost, girlhood, nostalgia, rebellion and vice, the 29 year old artist wields a ballpoint pen like a magic wand, creating intensely detailed drawings.

What at first appear as drawings of teens gleefully experiencing life, there is a subtext to her work. Exploring sexuality, rebelliousness and the breaking of social mores is a vital part of growing up and Helena makes sure to address these in her ballpoint pen illustrations. Helena says her art “aims to use self-deprecation and satire as a way to own up to those labels rather that shy away from them, and thus, put on display the very thing that others would scorn at.”

Using satire as a weapon against one’s own inner demons, Helena describes her work as also rejecting a pre-established set of codes of social conventions, breaking down a systemic derogatory social hierarchy. Her subjects not only own up to their short-comings or the labels placed upon them by others, but they embrace them unapologetically and revel in them instead.

A drawing like Mia, shown above, takes Helena about 350 hours to complete. You can watch a time-lapse video of her creating Mia here.

You have to look close at each drawing, to find clues hidden in the details as to what they’re really about: the bright and girly colours may often hide a darker side. It is deceiving, which in a way is the very essence of appearances : too often are we seen through a sheen of perfection we aim to display to the world, hiding our darker truth. I focus on what it means to become one’s self while refusing to be tamed and straying away from the idea of an unblemished self : It’s about faults, and owning them. – Helena Hauss

See more of her work at her site here

all images courtesy of Helena Hauss