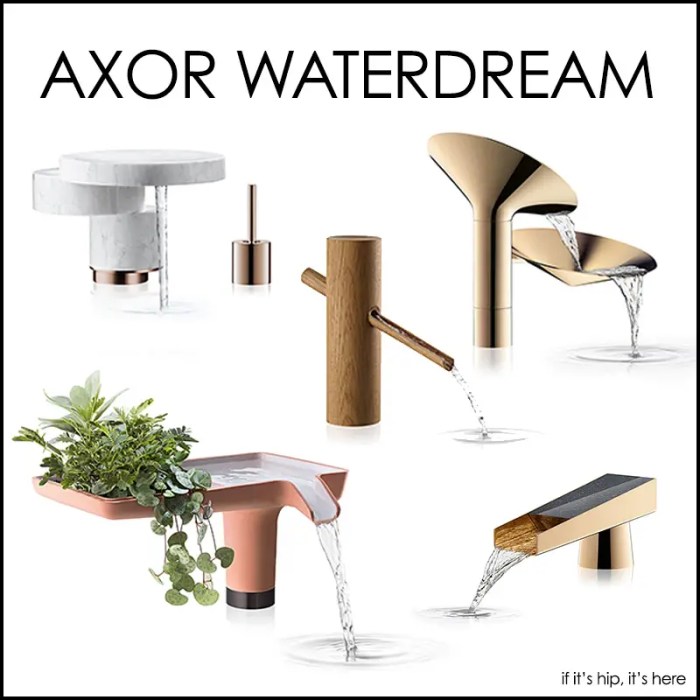 The Axor WaterDream 2016 project consists of five original faucets by designers and architects. The results of the “Create Your Own Spout” initiative have just been unveiled during FuoriSalone (April 11 – 17) 2016 at the Axor showroom in Milan.

As part of the Axor WaterDream project, Axor is constantly on the look-out for innovative solutions for the bathroom of the future. For many years now, selected architects and designers have accepted Axor’s invitation to turn their dream bathroom of the future, featuring the interplay between man, space and water, into a reality.

“Create your own Spout” is the motto of the Axor WaterDream 2016. Five internationally renowned Axor designers and architects created their own personal interpretations of a mixer spout. The project is based around the Axor U-Base – a universal mixer base onto which custom-made spouts can be fitted.

Despite their very different views on the meaning of water within the interior space, each architect and designer experimented with alternative materials and forms to celebrate water and its path on a functional, and on an emotional level.

They drew their inspiration from technical innovation around the wash basin, alternative materials and the new emotional significance of the basin mixer and the water within that space.

Ritual by David Adjaye
In British architect David Adjaye’s concept Ritual, water appears from under a granite inlay that is cradled by a wedge-shaped, precious metal (bronze) spout. The water, always in view, is ritualized: from source, to flow, and finally, to descent. David Adjaye celebrates the ritual of the modern luxury of running water with his open, upward-facing sculpture. The mixer is transformed into a valuable object made of bronze and granite. 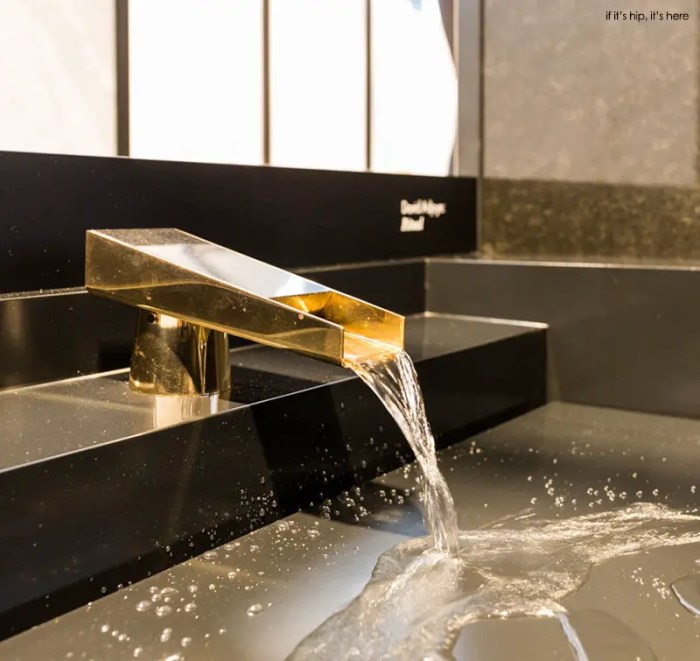 The designer drew inspiration from the technology of the Axor U-Base to “design a mixer which reveals its functions rather than concealing them.”

The Sea and The Shore by Studio Aisslinger
German designer Werner Aisslinger’s conceptual spout, The Sea and the Shore, is a hybrid consisting of a fountain and a shelf – a space for rituality and functionality. Crafted from the ancient and historical material clay, it emphasizes the longevity and the value of water and water-releasing objects in our societies. 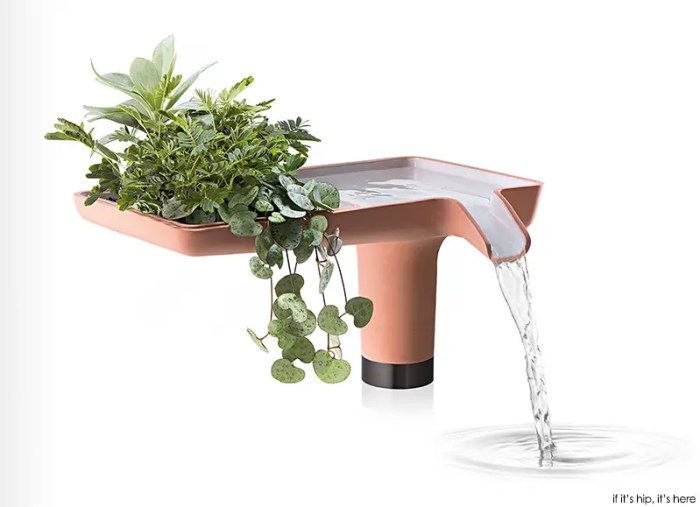 Water has been stored in clay amphorae since Roman times. In his design “The Sea and the Shore”, Werner Aisslinger has realised his dream of combining a fountain and a shelf into one hybrid designer object. The shelf is the beach and the fountain is the sea, which constantly floods the beach with fresh water. 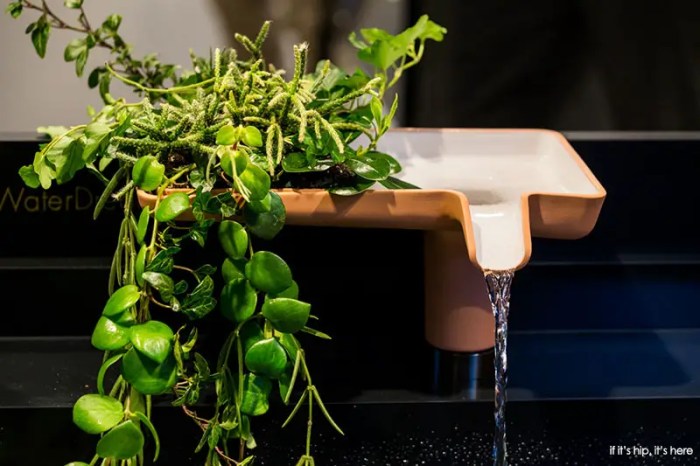 “I’ve always dreamt of perfectly integrating an object that dispenses water into my interior design. The Axor U-Base has made this possible.”

Water Steps by FRONT Design
Water flows from platform to platform in Water Steps, a sculptural metal spout by the Swedish duo FRONT. Focusing on the playful exchange between form and water, it aesthetically and acoustically underlines the emotional potential of the natural element as it flows over PVD-finished, metallic surfaces. Their Axor WaterDream, “Water Steps”, studies the beauty of water in all its facets: the sculptural design, with its platforms, demonstrates the playful exchange between man, water and form, step by step.

“As designers, the Axor U-Base gave us the impetus to push the boundaries of customisation.”

ZEN by GamFratesi
Zen, designed by the Danish-Italian duo GamFratesi, reinterprets the classic Japanese wood fountain. With its minimalistic form and water flow, it achieves a tranquil and meditative spirit, which depicts the honest connection between nature and water. “ZEN” puts a new interpretation on the classic oriental bamboo fountain: “Our minimalist design explores the honest connection between water and nature in a spiritual way.” For designer duo GamFratesi, the perfection of nature is revealed in the form of a minimalist mixer made of wood, through which the water flows meditatively. To the designers, the possibility of being able to create an object without being encumbered by any form or material specifications was something truly exceptional.

Mimicry by Studio Massaud
Jean-Marie Massaud’s Mimicry suggests a water-releasing object in complete harmony with the architectural landscape. Material (marble) and form (simple, geometric shapes) suggest an inherent connection to water and achieve an emotional enhancement of both object and resource. “We didn’t want to simply create a mixer, an object that dispenses water, we wanted to accomplish perfect integration into an architectural landscape.” “Mimicry” is a concept in which natural stone and water are merged together in elegant harmony. 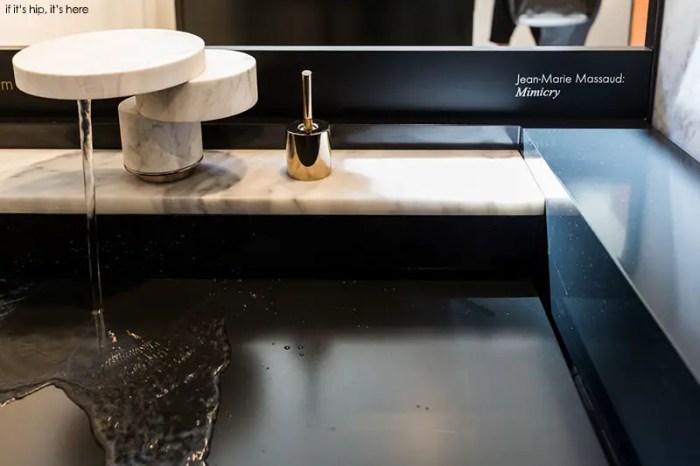 Simple geometric shapes have produced a landscape of marble. A homage to the significance of water.

“The Axor U-Base adds a new dimension to mixer typology. We wanted to be a part of this.”

“With the Axor WaterDream 2016 we discussed the meaning and value of water in our living space with some of the world’s best architects and designers, while testing the limits of individualization“, Philippe Grohe, Vice President of Design Management at Hansgrohe SE, summarizes. Developed with strong creative liberty, these five crafted and fully functional pieces are now on display for a design-savvy audience in Milan”, Philippe Grohe concludes.

Whether it is by integration or by making an obvious statement, all five crafted spouts address the evolving desire for individuality, emotionality and sensory experiences in living spaces where water interacts with us.

images and information courtesy of Axor Design and Domus

300 other inspiring designs for the bath:
Follow if it’s hip it’s here’s Bathroom Decor Inspiration board on Pinterest.

A Tub For Two Prescribed By Agape: The DR Tub

The Ovei Pod, A Personal Cocoon In Various Forms From Artist-Decorated to Gaming.