` Alcohol Infused Whipped Cream - If It's Hip, It's Here
Skip to content 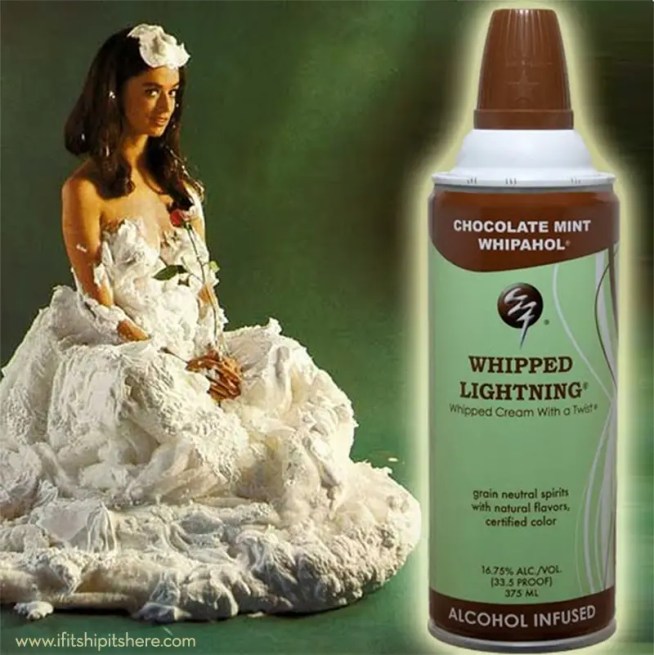 I recently wrote about Smirnoff’s new flavored vodkas, one of which is said to taste like whipped cream. This got me thinking…. what if there were an actual whipped cream that tasted like vodka instead of the other way around? So, I did a little googling and found something even better…. Whipped Lighting – Alcohol Infused Whipped Cream in a can in 11 delicious sounding flavors.

2010 update: after hitting the market, this product and others like it were portrayed as something sinister aimed at young people and became the next “big controversy” As a result, laws and regulations ceased production and the sell of the whipped booze products.

2022 update: Cardi B introduces Whipshots (basically the same thing, so clearly laws and regulations have since relaxed. Whipped Lightning (which I prefer referring to as its urban slang nickname and their url… Whipahol) contains 18.25% alcohol (36.5 proof) with the exception of four flavors (Caramel Pecan, Chocolate Mint, German Chocolate and Hazelnut Espresso) which contain 16.75% alcohol (or 33.5 proof). 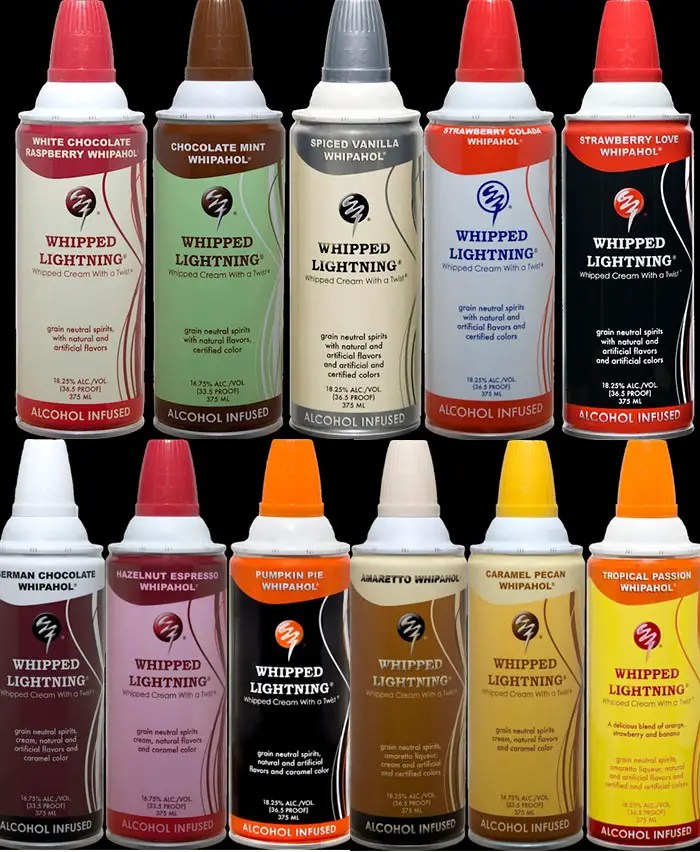 Whipped Lightning can dress up many a drink (and a dessert). Whether you prefer a martini, shot or shooter, cocktail, frozen drink, coffee, pie, ice cream or just straight from the can, Whipahol is one of a kind. Okay, not really one of a kind since a competitive product named Cream with 6 flavors, 15% alcohol content and much better designed packaging has recently hit the market.

As you would expect, many college campuses, concerned parents and special interest groups are up in arms over this product because of its obvious appeal to underage drinkers who are likely to abuse the product. Ingesting one full can will give you an effect equal to about three beers – and probably a stomachache.

Below are some answers from the folks behind Whipahol you’re bound to have about this creamy booze in a can.

Do I have to refrigerate Whipped Lightning?
No, Whipped Lightning does not need to be refrigerated, ever. As a matter of fact refrigeration will cause the alcohol to separate from the cream and Whipahol will serve rather muddy. Don’t worry though, refrigeration won’t hurt it; just let it return to room temperature and all will be fine. Whipahol is infused with grain alcohol and pressurized inside a sterile environment. Although it will not go bad sitting out on a hot summer day we recommend trying to keep it somewhere around 70 degrees.

Should I shake the can?
You should shake Whipped Lightning vigorously before serving. This will help to mix up all the tasty ingredients.

There is still product in the can but why is nothing coming out?
Whipped Lightning is under pressure, if the can is relieved of pressure the product will not dispense. Do NOT spray Whipahol while the can is pointing up or sideways because the gas will be used up before all the Whipahol is dispensed from the can. Be sure to shake well, point the can downwards and spray.

Can I leave Whipahol in my car on a hot summer day?
No, you should not leave Whipahol in a hot car. Any aerosol product can become over pressurized by the heat in a parked car. This will cause the valve to fail and Whipahol will end up all over your upholstery rather than where it belongs, in your mouth. By the way, that fabulous image of the girl covered in whipped cream at the top of this post is from the photo shoot of Herb Alpert’s Tijuana Brass 1965 album cover for Whipped Cream & Other Delights

(courtesy of Esquire magazine’s archives and composited by yours truly)

A Pantone Cafe Pops Up In Monaco