you are here: if it's hip, it's here » underwater ride

SUBWING is a new water sport product invented in the summer of 2010 by Simon Sivertsen. It allows you to fly through the water, much like a dolphin. The Carbon Fiber ‘wings’ allow you to glide, turn and twist as much as you’d like at the water’s surface or ocean’s bottom, while being pulled by a boat. END_OF_DOCUMENT_TOKEN_TO_BE_REPLACED 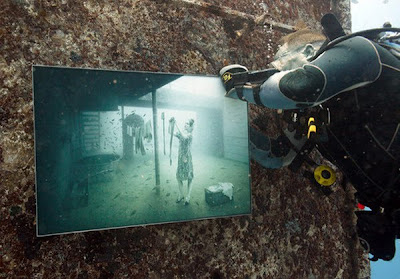 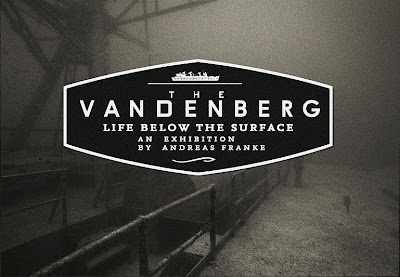 100 feet Below Sea level – The Exhibition
One Year after Andreas Franke’s visit to the Vandenberg his images of the wreck were filled with charming stories and now they are exhibited on the most relevant place possible, where the project began.

Since August 4th 2011 divers can benefit from a very special experience and find a package of 12 images placed on the hulk of the artificial reef General Hoyt S. Vandenberg located 100 feet below sealevel and approximately seven miles south of Key West.

Andreas Franke’s exhibition contains the twelve works below, showing everyday scenes from past times. The stage of those scenes is the very place the pictures are now exhibited, on the Vandenberg. 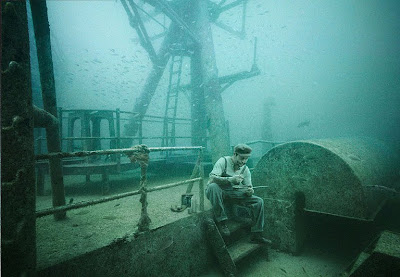 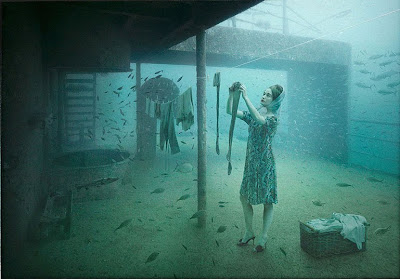 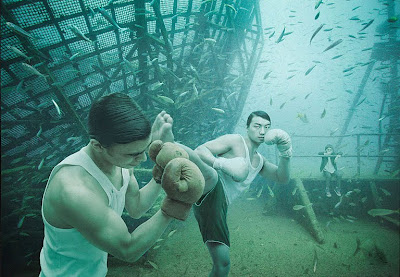 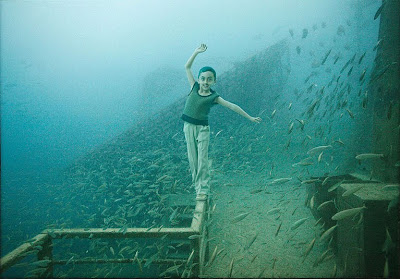 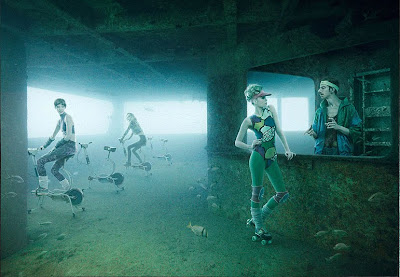 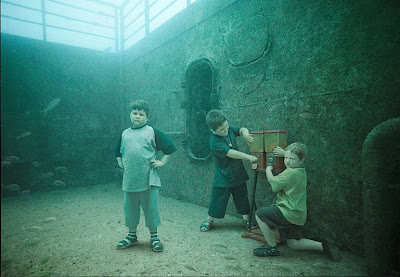 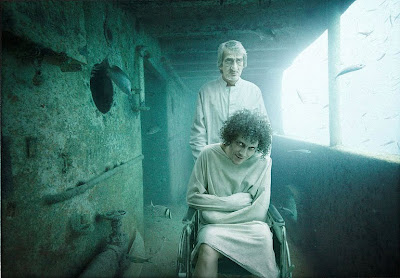 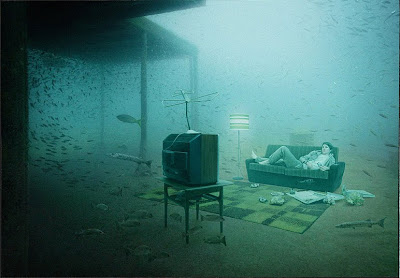 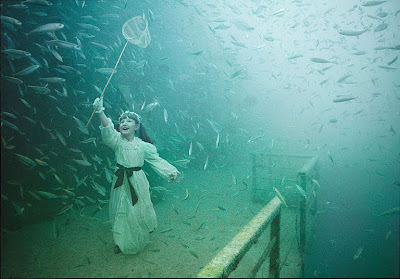 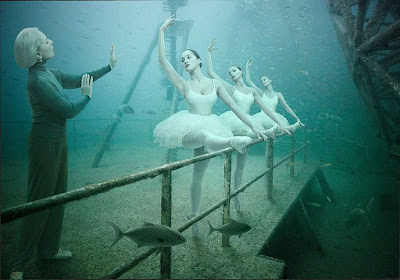 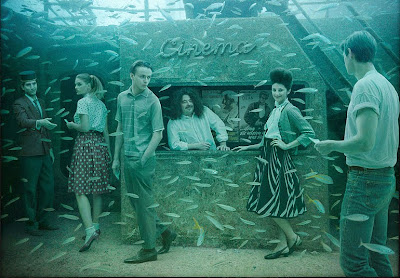 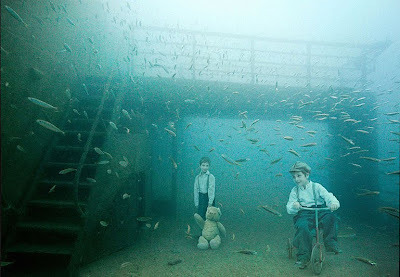 The images are encased between sheets of Plexiglas with a stainless steel frame. A silicone seal keeps out the water. The images are attached to the ship by strong magnets which grants a damage free removing after the end of the exhibition.

Andreas says that the images are “Mystified scenes of the past that play in a fictional space. Dreamworlds, where you can get lost or you can identify with. This makes a new and unexpected atmosphere.” 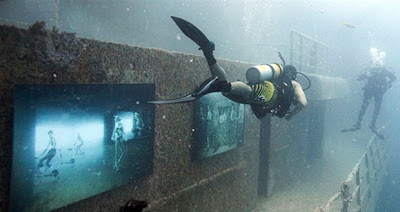 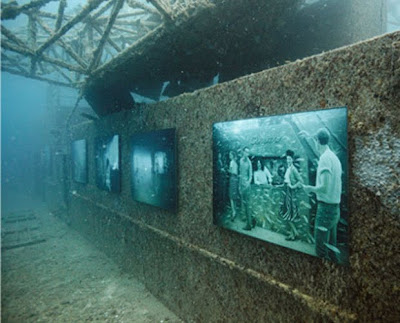 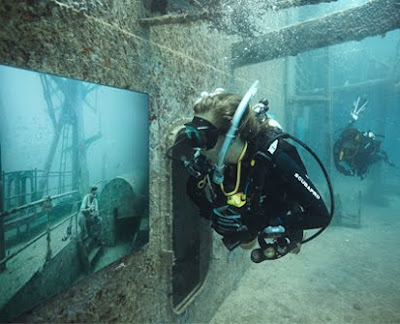 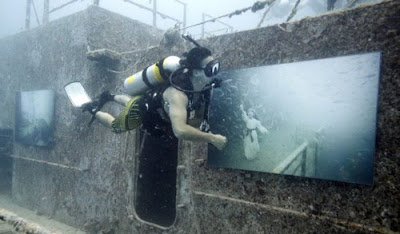 Visiting the exhibition with chartered Boats is possible out of Key West.

About The Ship:
The Vandenberg – From Troop Transporter to Art Gallery 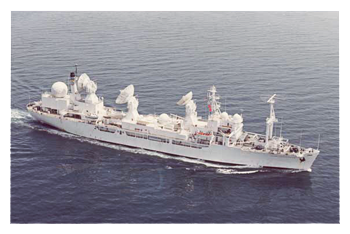 The ship later known as General Hoyt S. Vandenberg was launchend in 1943. Initially it was named USSGeneral Harry Tayler and acquired by US Navy as a troop transport ship for WW II.

In 1961 the ship was transferred to US Air Force, converted to a missile range instrumentation ship and renamed to Gen. Hoyt S. Vandenberg. In this function the Vandenberg served US Air Force and US Navy till its military retirement in 1983.

The Vandenberg Its second career started in 1998, when the ship became the stage for the science-fiction movie “Virus”. It substituted the Russian vessel Akademik Vladislav Volkov. Some of the cyrillic lettering is still visible on the hull today.

In 2008 a group of investors auctioned the Vandenberg. The vessel was transferred to Key West to get sunk and convert to an artificial reef in the Florida Keys National Marine Sanctuary. In 2009 all necessary preparations were done and finally the Vandenberg got sunk on 27th May 2009. The 523 feet long ship is the second largest artificial reef in the world. More information at www.bigshipwrecks.com

In 2010 was Andreas Frankes first visit to the Vandenberg. He did several dives and shot loads of pictures which should give new food to his thoughts. This was the beginning of “Life Below The Surface” and Vandenbergs last conversion so far, the conversion to an underwater art gallery. 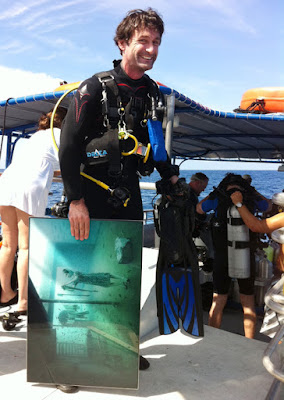 Andreas Franke is in business for more than 20 years and nowadays one of worlds most respected advertising photographers. For Luerzer’s Archive he is listed several times in “200 Best Ad Photographers Worldwide” and his work is honoured with the most important awards in business. Andreas Franke in Key WestClienst like Ben&Jerry’s, Coca Cola, Ford, Heineken, Visa or Nike are just a few of global brands which trust on his abilities.

Additionally to his commercial work Andreas worked on several personal projects. “Life Below The Surface” is his freshest and most sensational.

Andreas Franke on his work “In my photography I try to construct illusionistic worlds. I like to see things from a different angle and I try to create new kind of views. Thereby taking images of a sunk ship and bringing life back to the ship by filling these images with stories was always very interesting for me. By diving the Vandenberg I finally found the perfect stage and the last obstacle to realise my idea was removed.

My work is always based on a strict concept, which is photographically and technically perfectly implemented. Every little detail is part of a precisely arranged production. There is no space left for fortuity.”

images and information courtesy of the artist and KeyNews