you are here: if it's hip, it's here » organic vodkas

Today is the celebration of annual Earth Day. So why not raise a glass of Organic Vodka to toast our planet? This is my Part II post about certified Organic Vodkas and/ or Green-related Vodkas, calling attention to some of the newer ones on the market or ones that were not in my initial post of 10 Organic Vodkas. Cheers! 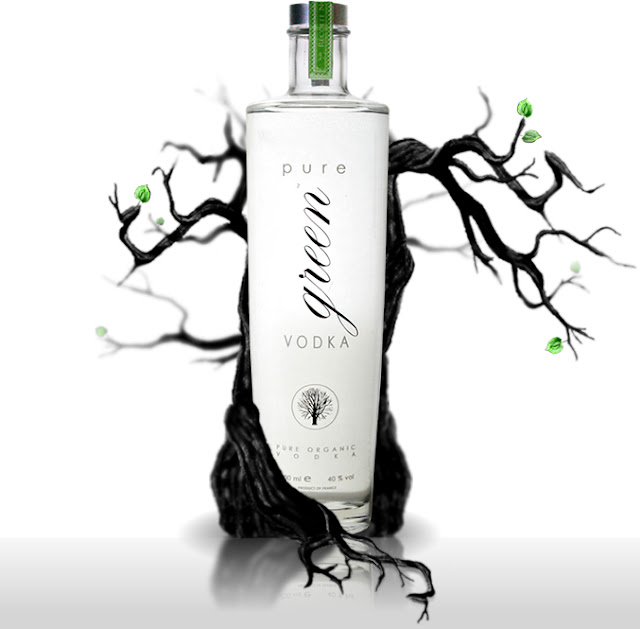 The Pure Green Vodka Company was born from the idea that an organic mindset can apply to the spirit industry, and that genuine handcraft and quality can rhyme with sustainable organic production.

The team behind The Pure Green Vodka Company comes from a background that spans across the beverage industry: From distillation to import, from spirit sommelerie to high-end mixology. With years of experience in their field, international track record and a resolute “green thinking” approach to this project, they set up to analyze every aspects of the production in order to create a highly qualitative spirit, with an irreproachable organic pedigree. 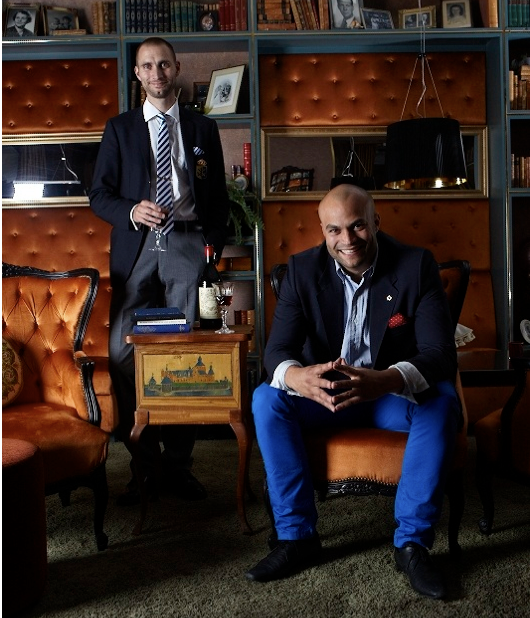 above: the team behind Sweden’s Pure Green Vodka

From farming methods and production, to transport and bottling, the Pure Green Vodka Company has kept the same uncompromising green thinking principles, and was the very first Vodka to ever be awarded by the EEC the prestigious Eco certification “Organic Farming”, that stands now proudly on the back of the bottle.??The final product, Pure Green vodka, is a rich and full-bodied vodka with crisp minerals, proud of its origins and it’s organic identity.

Pure Green™ is made solely from the finest organic wheat and French well water from the calcium rich soil of the Charentes region in France. Distilled six times and cold filtered, the vodka is pure and well structured, yet retaining all its original wheat character. 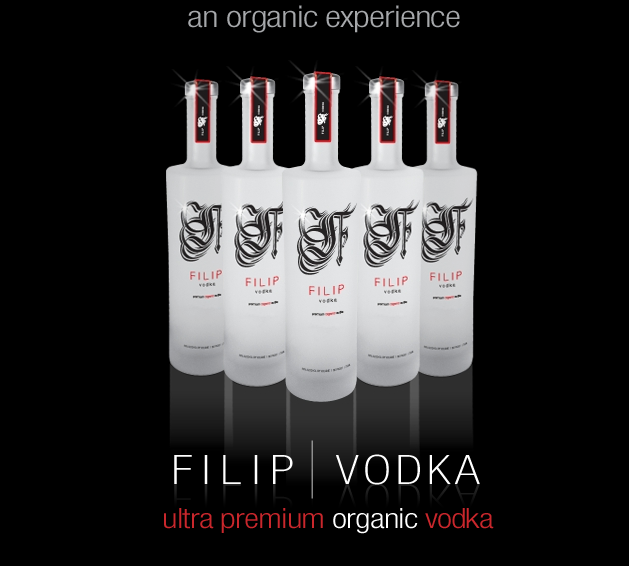 Made from organic winter wheat imported from the Piedmont region of Northern Italy. It’s 5x distilled and 3 x filtered, making it one of the purest vodkas on the market. And with no added sugars or preservatives, it’s 30 to 40 calories less per serving than most other vodkas. 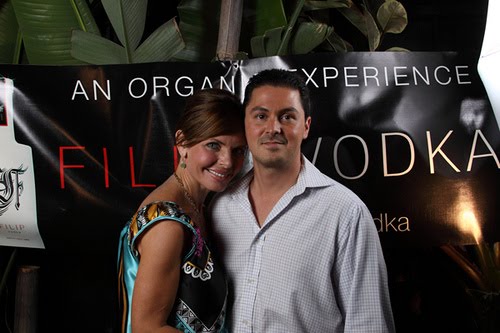 above: Jen and Andre Filip of Filip Vodka (image courtesy of the green girls) 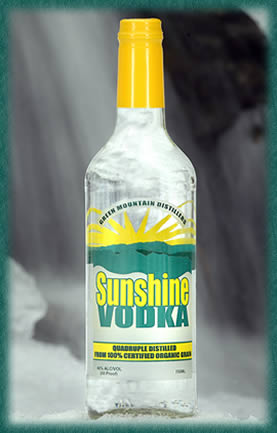 Sunshine Vodka, from Vermont’s Green Mountain Distillery, begins with the purchase of the highest quality Certified Organic, GMO free grain. The grain comes from a family farmer owned co-op and is grown without the use of chemical fertilizers. The grain is used in a process called Saccharification, where starches are converted to fermentable sugars. These sugars are then combined with our proprietary yeast in a fermentation process to create alcohol. The yeast eats the sugar and gives off alcohol as a by product. The fermented liquid is then transferred to the still where distillation begins. Distillation is a method for the separation and removal of alcohol by means of evaporation.

By keeping precise temperature parameters in the still only the finest alcohol is evaporated away. The pure alcohol vapors rise in the still until they are carried, by the lyne arm, thru the condenser where cooling temperatures cause them to return to a liquid form. The resulting liquid, which is at close to 190 proof, is then combined with the purest Vermont Spring Water to form the finest of distilled spirits.

Because of the precise temperatures and the quality of the ingredients used, for those at Green Mountain Distillers, the production process ends here. They have no need for extraneous filtrations or additions to hide or mask unwanted flavors and impurities. 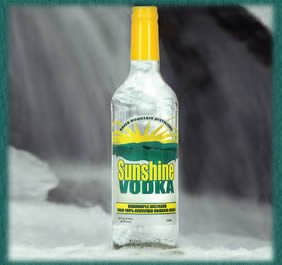 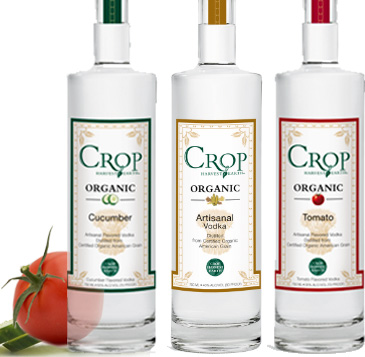 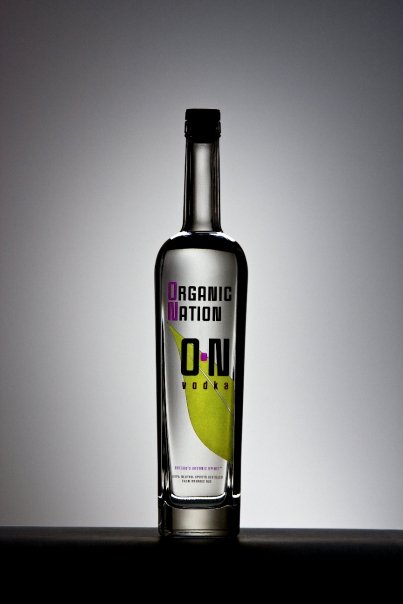 Diane and David came to a distilling career in a circuitous way. First, they fell in love in 2004 over several Martinis. Then, over a vodka Martini during the summer of 2006, they decided they wanted to make our own Vodka. And it would have to be Organic Vodka. So, they instituted their own training program and visited as many micro-distilleries as they could in Oregon, meeting some great people who since have become great friends. 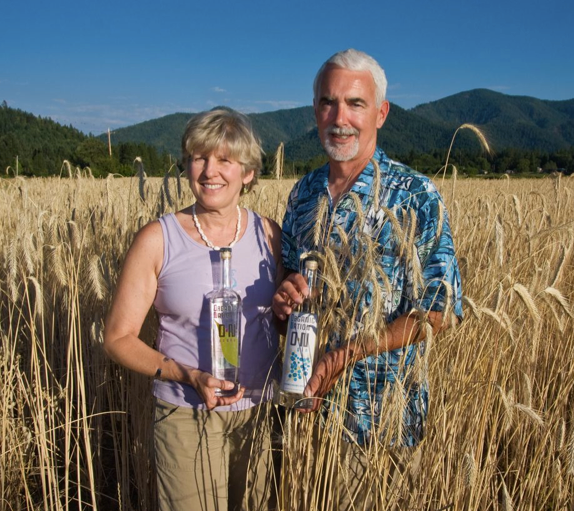 After a year of getting the myriad of legal aspects taken care of, they ran an ad in the American Distiller’s Institutes e-newsletter for a Master Distiller.

Thomas McKenzie, of Alabama fame and fortune, who was weaned by the ‘Moonshiners’ of the early 1900’s, replied to their ad and in his smooth southern accent and effervesence style convinced them to hire him. Since then, they have done business with Box, Bottle, Cork, and Label Brokers, to mention a few. They have worked with the federal, state and local governments for Licensing. They claim to have had more than their share of good fortune and good friends giving them good advice. And, the rest is history in the making. 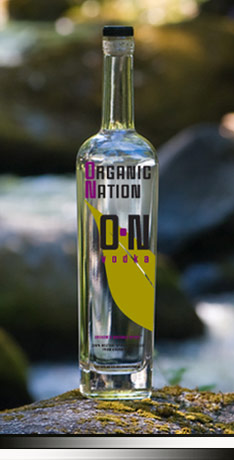 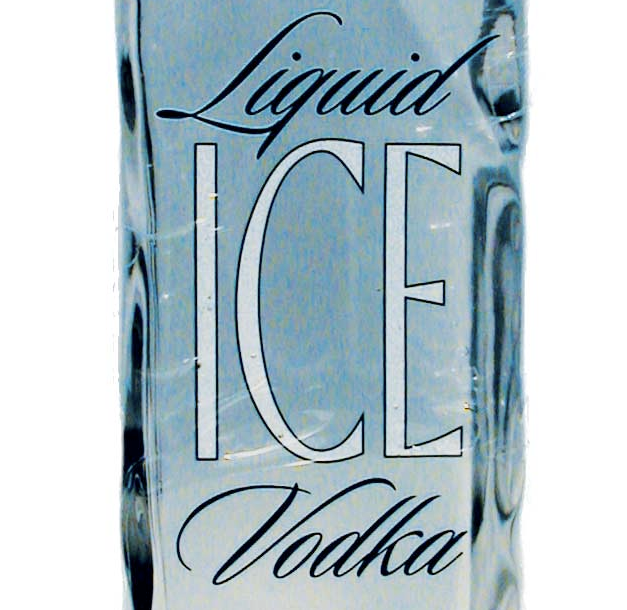 Liquid Ice is the only vodka that can claim that’s its completely certified organic from start to finish as its distillery is the only one in the United States authorized to do so. So much that they put a certified statement on each and every bottle to prove it.

Liquid Ice is made with water from one of the world’s healthiest & cleanest aquifer, the Snake River. The Snake River runs right under the distillery, which is the home of some of the best known hand crafted vodkas, either made from potato or grain. 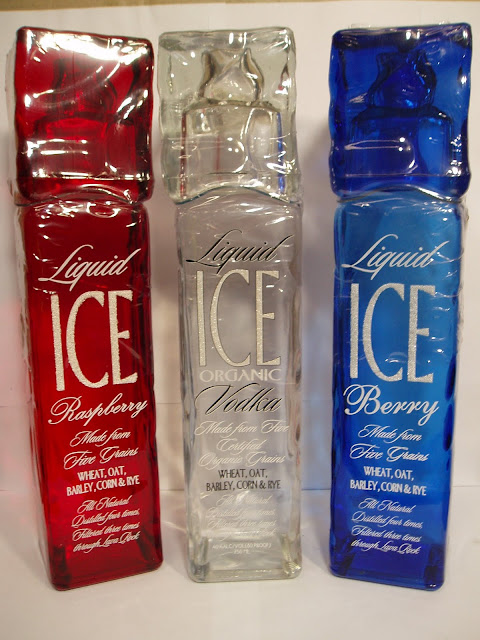 Liquid Ice is distilled four times for the cleanest, freshest taste and thus produces some of the highest viscosity in vodka in the world. Then it is filtered three times, through the world’s richest source of minerals, lava rock.

Liquid Ice is a vodka that can claim, “It is truly the only one of its kind”. No other vodka produced in the world can claim its multi grain, 100% certified organic and Kosher! 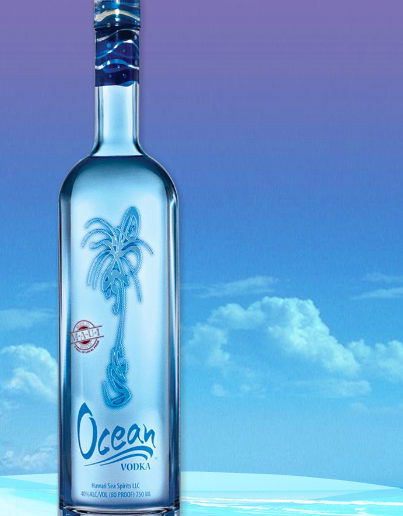 Ocean Vodka is distilled in Idaho from organic grains then shipped to Maui where it’s blended with pure Hawaiian deep sea water pumped up from depths of 3,000 feet of the Kona Coast of the Big Island by a company cleverly named MaHaLo (the Hawaiian word for thanks). Water from that depth has no man-made chemicals and no bacteria. Or so the sales pitch goes. The salt is removed topside. 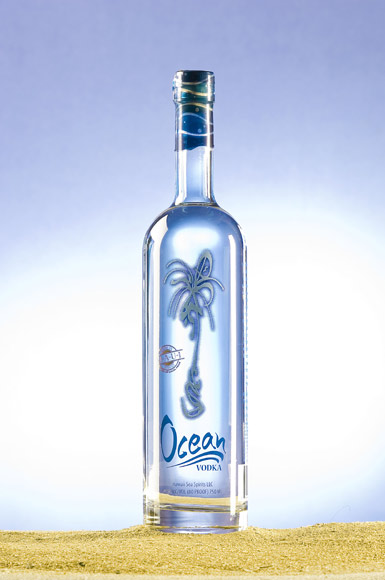 Handcrafted and bottled on the Hawaiian Island of Maui, OCEAN Vodka is a meticulous blend of the finest organic spirits and pristine MaHaLo Hawaii Deep SeaTM Water from 500 fathoms below the surface of the Pacific Ocean. A touch of sea salt balances everything out.
Ocean Vodka 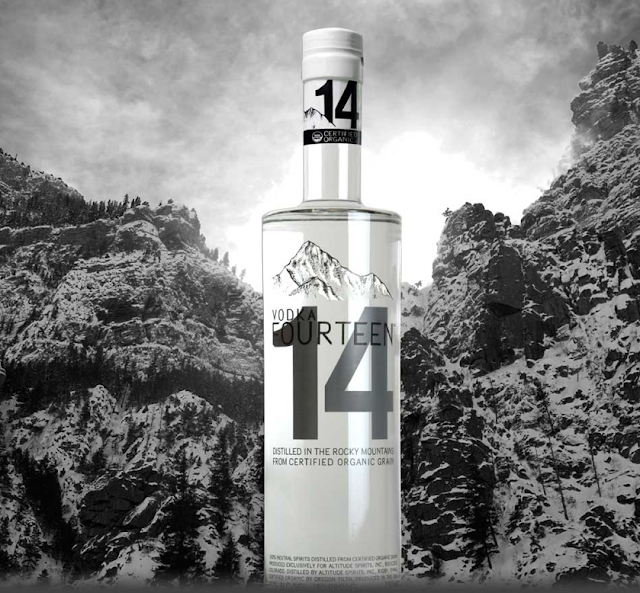 Distilled at the foot of the majestic Teton range of the Rocky Mountains, Vodka 14 is wholly dedicated to a single, simple proposition: that by combining exceptional ingredients and meticulous distillation, our small, independent, family run company based in Boulder, Colorado can offer a product superior to mass-market brands both imported and domestic. If the finest ingredients are the heart of a remarkable vodka, exceptional distillation is the soul.

In crafting Vodka 14 they blend five generations of distilling heritage with the best of modern technology: a four-column continuous distillation system. In a continuous still the mash (the fermented grain) is heated until it becomes a vapor, rising towards the top of the still. As it rises, the distillate vapors condense back into a liquid state and cascade back down, beginning the process anew. This cycle allows the mixture inside the column to be re-distilled continuously, whereas in a conventional still the vapors would pass into a gas state once and then be collected. 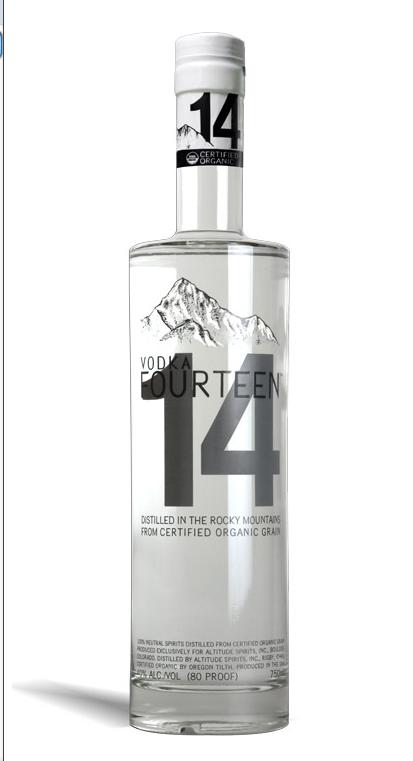 After distillation, Vodka 14 is passed through an advanced activated carbon and crystal filtration process. Combining this sophisticated distillation technology with the meticulous attention inherent in small-batch production, Vodka 14 achieves a purity of distillation befitting its remarkable organic ingredients. 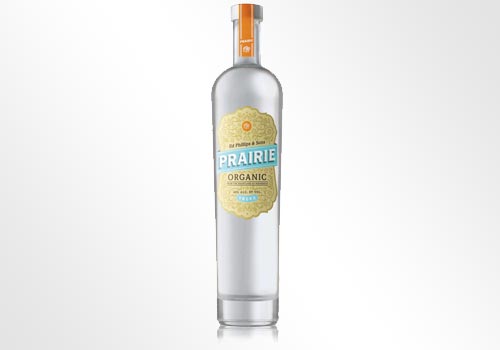 Prairie is a beautifully smooth vodka distilled from organic #2 yellow corn and certified both organic and kosher. Each batch of Prairie is distilled as many times as necessary to yield the desired character and smoothness, typically between four to six times through a column still. The spirit opens with hints of melon and pear on the nose, followed by creaminess on the palate and a bright and smooth finish. 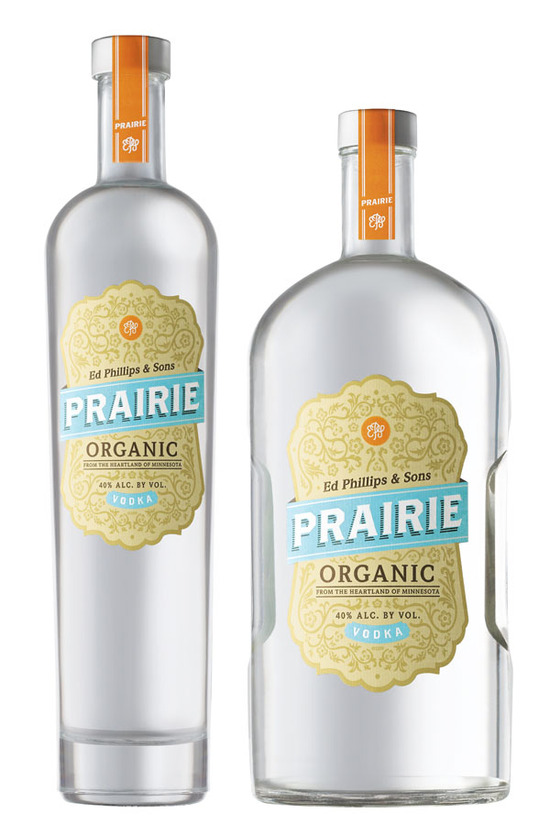 In the spirit of self-reliance, leftover corncobs and other biomass are converted on-site at the distillery to biogas energy for powering the stills. In addition, the Distillers Dried Grains with Solubles (DDGS), a co-product of distillation, is returned to farms for reuse as feed. Since Prairie is crafted many thousands of miles closer to home than imported brands, it also requires significantly less petroleum to bring to market. 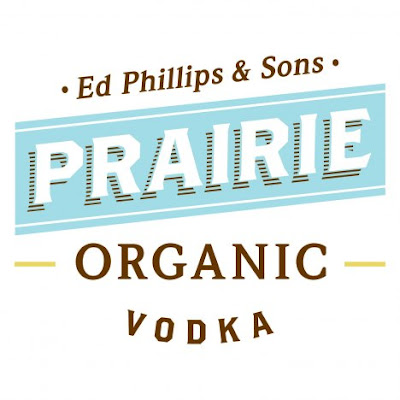 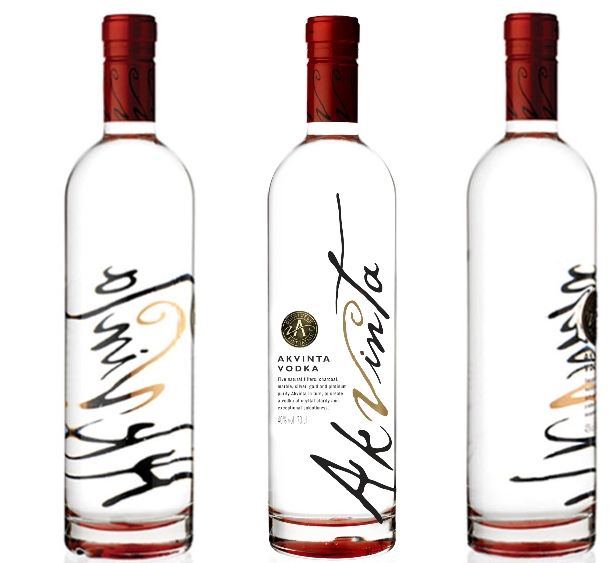 Akvinta Vodka is touted as the Mediterranean’s First Luxury Organic Vodka. It has been certified as an organic vodka by US Agricultural Department. Akvinta is carefully crafted using premium ingredients such as alcohol distilled from finest quality wheat and a revolutionary Quintuple Filtration system that uses five natural filters to purify the water and the finished product in turn.

When tasted, Akvinta has a distinctive but subtle aftertaste – just like spring water tastes when compared to plain table water.

In August 2008, Dister S.p.a. was awarded two certificates confirming organic origin of alcohol: Certificate of Conformity to the EEC 2092/91 Regulations and the Certificate of Organic Operation in conformity to US Agricultural Department standard of National Organic Programme (USDA-NOP)
Akvinta Vodka

Now With Flavor!
Many of the Vodkas I wrote about in my first post on Organic vodkas – or in my post about 25 unusual Vodkas, have since come out with flavored vodkas, such as: 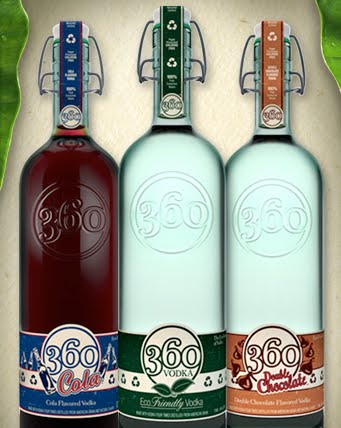 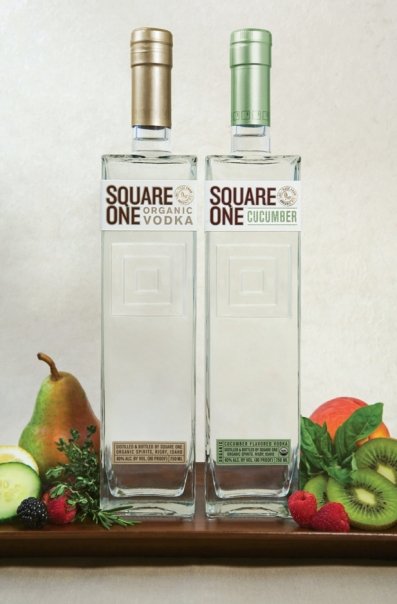 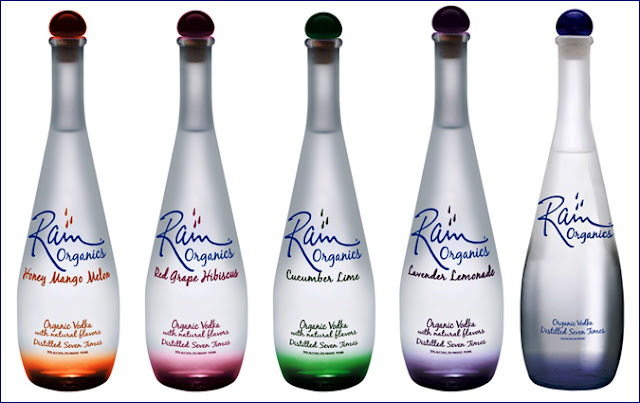 Part I: Can Imbibing Save The Planet? 10 New Green Vodkas
And my post on Premium and Unusual Vodkas included the following organic vodkas:
• Tru Organic Vodka
• Triple 8 Vodka

Interested in learning about other Organic Cocktails?
Then I highly recommend Organic, Shaken and Stirred: Hip Highballs, Modern Martinis, and Other Totally Green Cocktails

Since this post and some of my other Vodka posts, the bottles have been redesigned or updated. Check out my Pinterest board of the latest and greatest bottle designs here.

To see all my pinned bottle designs and packaging, go here.

Okay, so maybe getting drinking eco-alcohol products won’t really save the planet, but it certainly won’t hurt it. Given the new and growing awareness of the importance of utilizing sustainable technologies and renewable resources and packaging, several companies are coming out with “green” spirits, here are some planet-friendly Vodkas for you. END_OF_DOCUMENT_TOKEN_TO_BE_REPLACED