you are here: if it's hip, it's here » mad men yourself 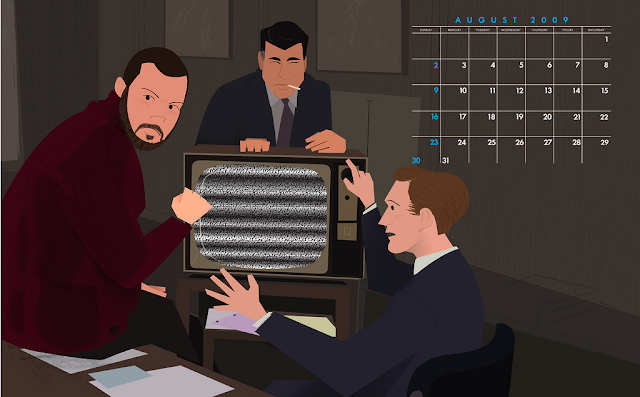 Seems that AMC’s MadMen just keeps growing in popularity- especially with the “MadMen Yourself” promotion, which is why, just before their third Season Premiere, I wanted to rerun this post introducing you to the artist behind the images. 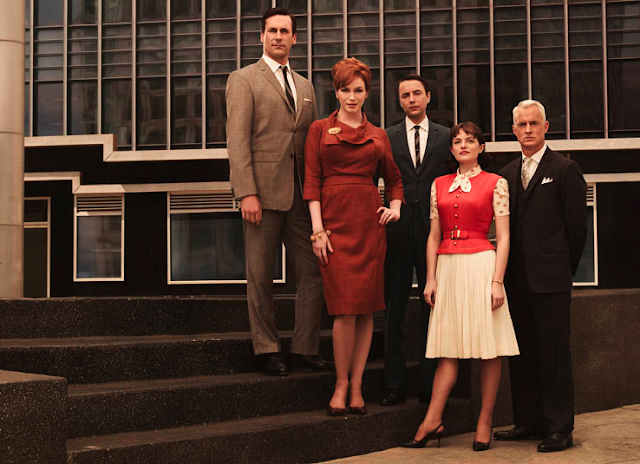 The post below originally ran on October 14th, 2008 and is being run again with an addendum as well as some new images: 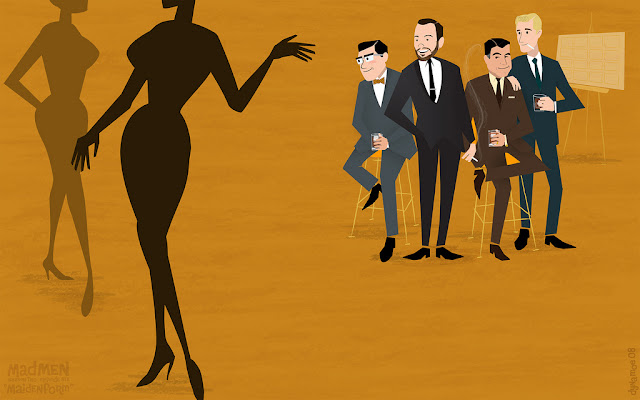 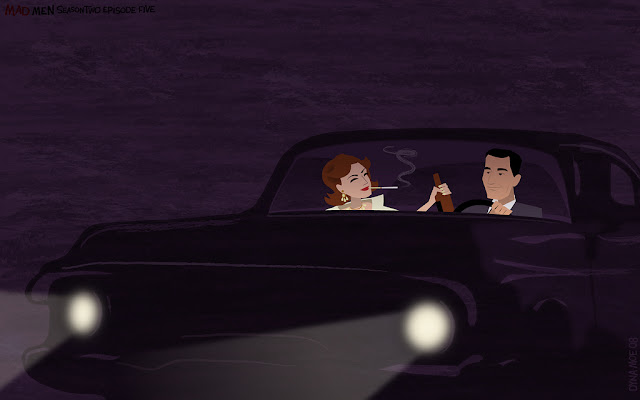 AMC’s Mad Men is the hot tv show du jour. With multiple Emmy nominations (two wins, including one for Best Drama) and a rapidly growing cult following, it’s been the subject of many a water cooler conversation. 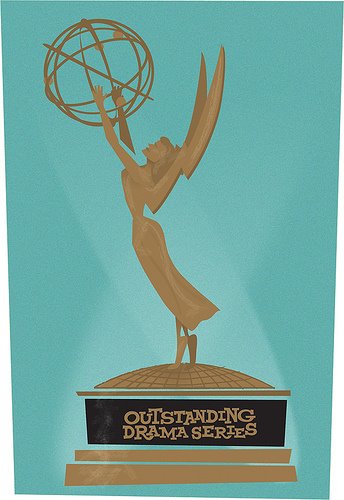 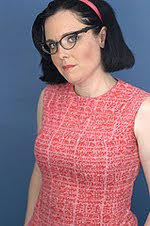 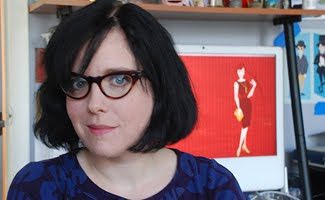 Graphic designer/illustrator Dyna Moe (hopefully a psuedonym) has done an honor to this show by capturing it in her many whimsical retro styled illustrations that can be downloaded as wallpaper for your computer from flickr or available for purchase here. 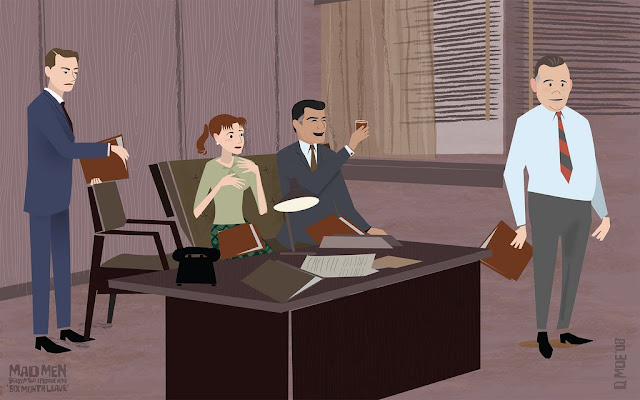 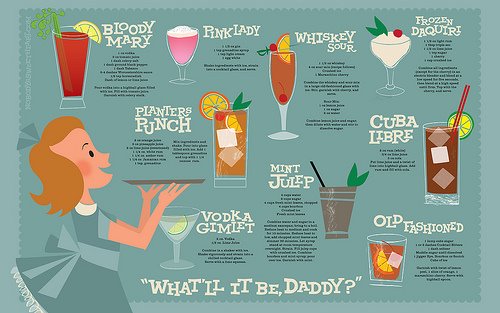 So, how did she get into this? She’s clearly a talented illustrator and graphic designer and was asked to create a Christmas card for Rich Sommers, who plays character Harry Crane on the show, to give to his office mates. Seems that a passion was born because that was just the beginning. 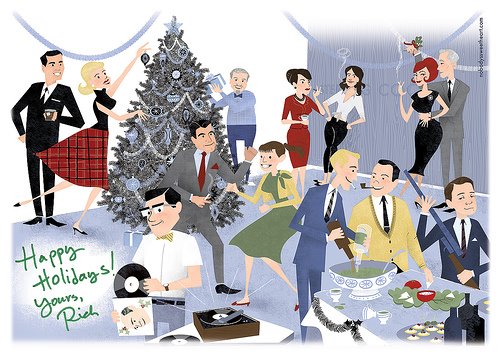 Above: the Christmas Card she created for Rich Sommers (Harry Crane)

She then began drawing a commemorative image as desktop wallpaper from each episode (sometimes more than one) and has created downloadable icons, iPhone wallpapers, placemats and more. Customizable prints of her most popular illustrations are for sale through zazzle.com.

“I’m a freelance illustrator and designer in New York City, who also does comedy on occasion. Sometimes at the same time.

The bulk of my work is for the alt comedy scene — flyers, posters, logos, etc. I have been the unofficial official house designer for the Upright Citizens Brigade Theatre in NY since 1999. I also have done a ton of CDs and 7″ designs for local indie pop/punk labels.”

Well, she’s certainly busy. And funny. I enjoyed reading her commentary on both her blog and flickr as much as I enjoyed her illustrations.

Her blog, “I let My Fists Do The Talkin'” can be viewed here.
Below is a series of downloadable icons, the perfect ‘must have’ for any Mad Men lover. 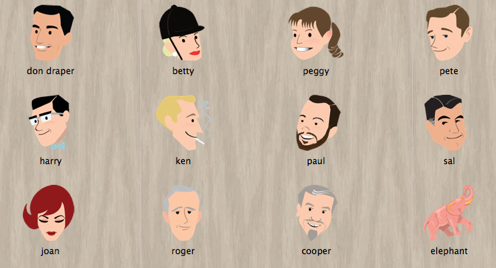 She’s been so prolific that I can hardly share all her work with you, for that you’ll have to visit her set of Mad Men illustrations on flickr or her website.

Here are just a few of her renderings from seasons 1 and 2 of Mad Men: 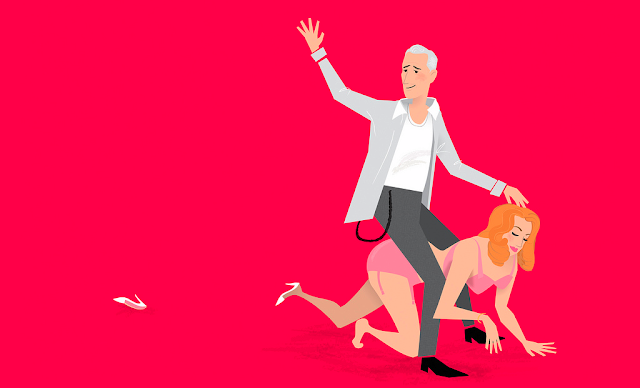 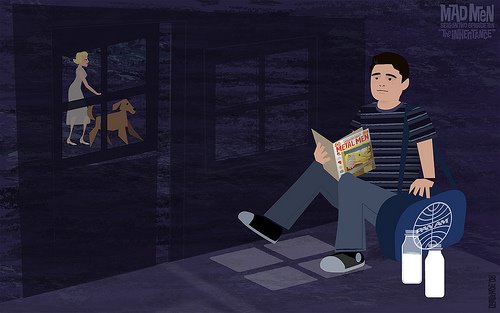 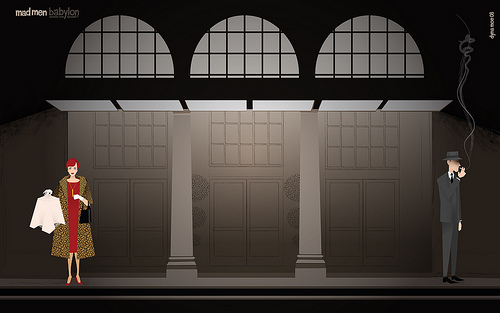 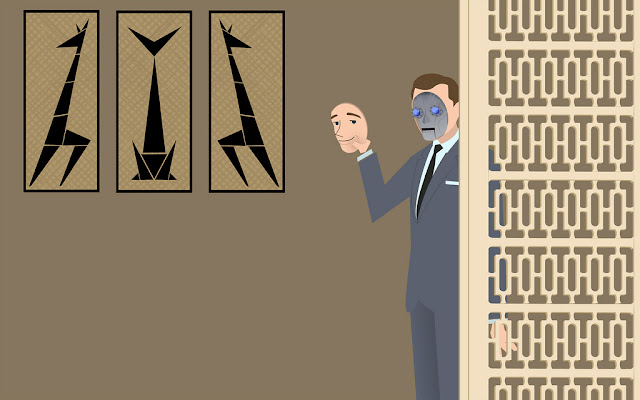 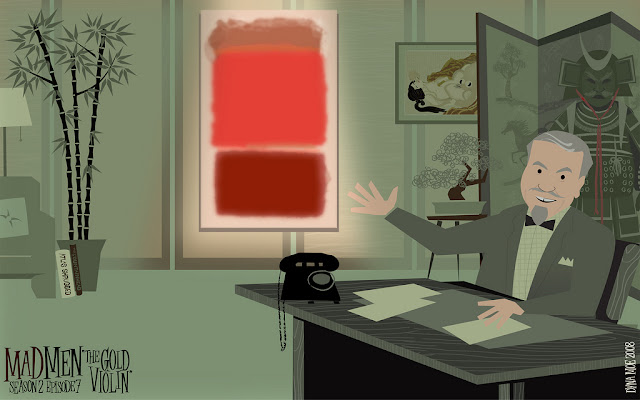 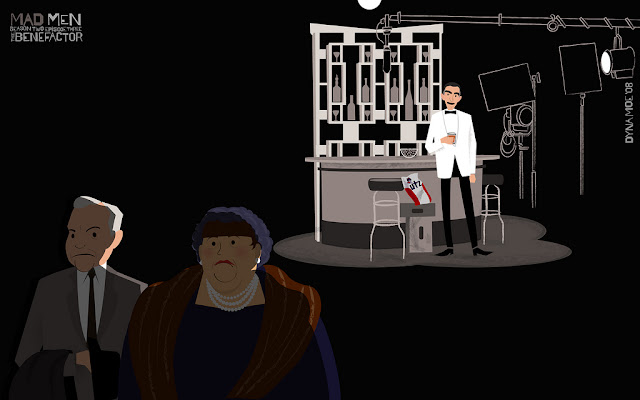 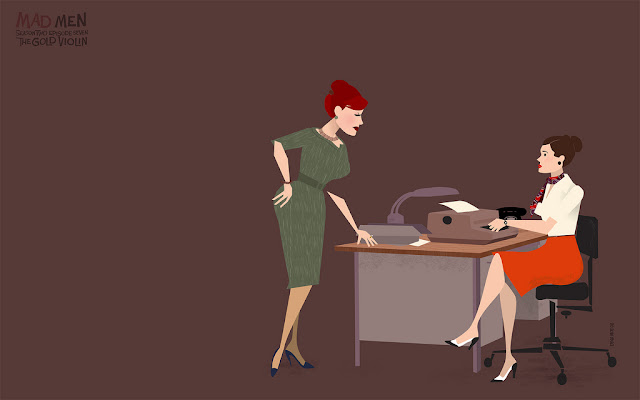 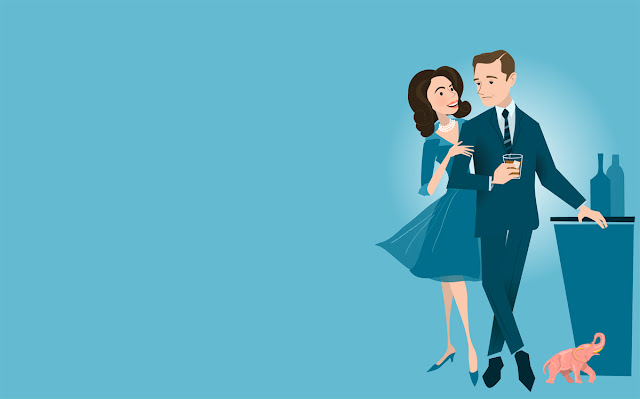 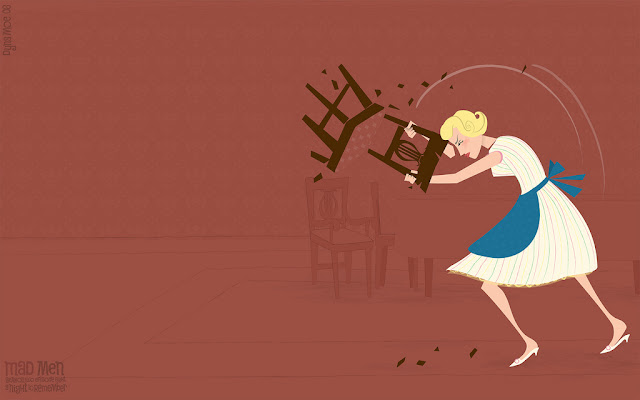 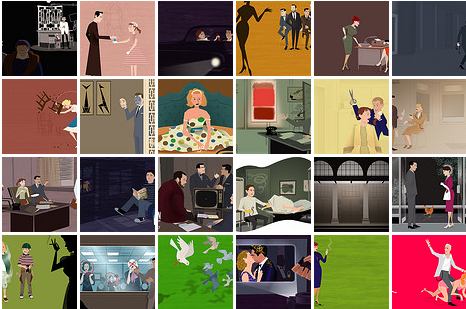 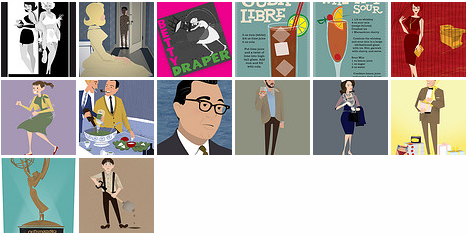 Above: Get your iphone wallpapers here

A generous soul, she writes “Feel free to download and use any of them as wallpapers or write in your blog or website about them. I give everyone blanket permission to do so… you don’t even need to ask. Just stop with the incredulous eye-rolls about my name. “

I like her already and don’t even know her.

Update: Months later, everyone on social networks and the web are “Mad-Mening” themselves, a fun AMC sponsored Avatar generator. So, who’s the artist behind it? You guessed it, Dyna Moe! 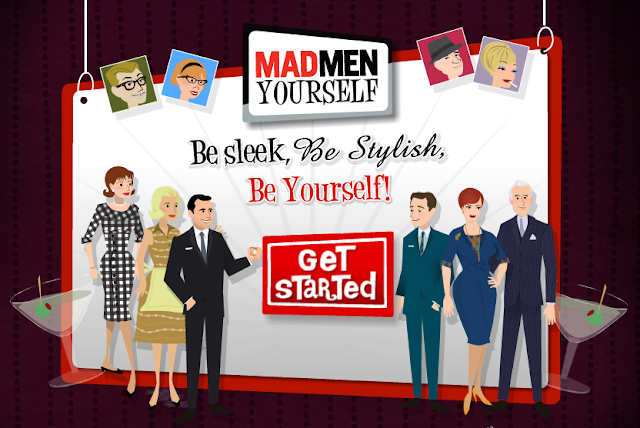 The software allows you to customize an icon, a cell phone wallpaper and computer wallpaper, here’s mine in all three sizes: 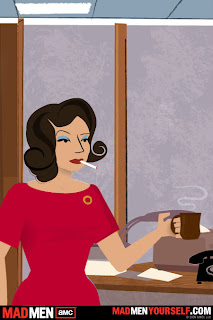 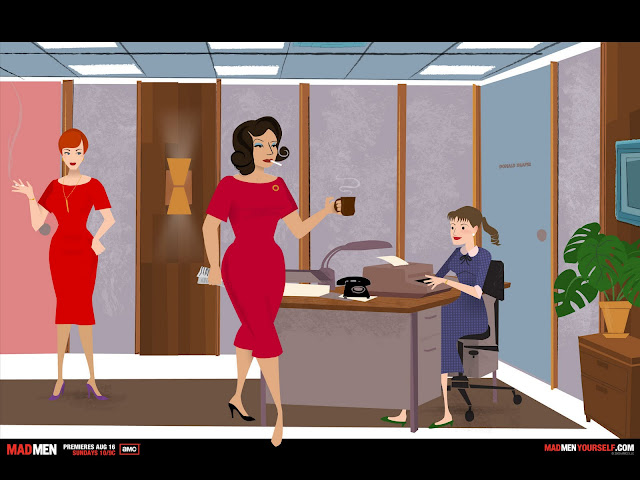 Oh, and then I had to add a laptop and my dog, with the help of photoshop: 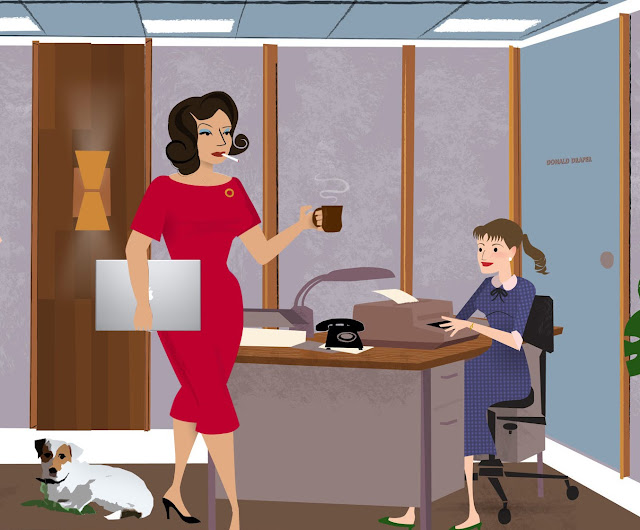 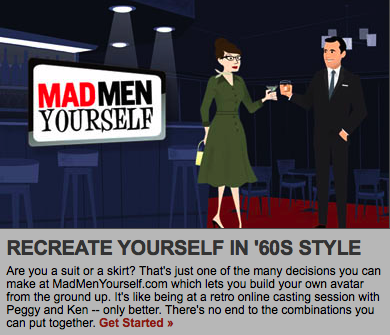