Turkish artist Ertan Atay began his career as a graphic designer, then segued into art direction and photography before becoming the in-house Creative Director for Turkey’s MinT Production company from 2007-2013 after which he opened his own creative agency. Having followed Instagram closely for both his job and his own interests, he had begun collecting imagery that appealed to him and in his downtime started making fun collages and collage videos on his own Instagram account, garnering several followers. END_OF_DOCUMENT_TOKEN_TO_BE_REPLACED

Thanks to my brother-in-law, artist David Tomb, I learned of this humorous collaborative project, Painters Portraits, between artist Hank Schmidt in der Beek and photographer Fabian Schubert. END_OF_DOCUMENT_TOKEN_TO_BE_REPLACED 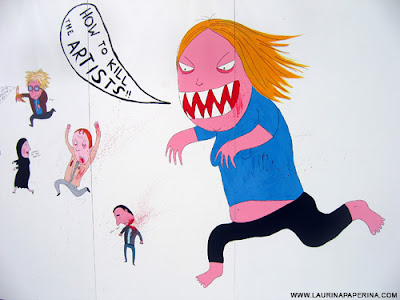 Meet Laura Scottini (aka Laurina Paperina), an italian artist with a wonderfully wicked sense of humor tinged with a schadenfreude vibe. END_OF_DOCUMENT_TOKEN_TO_BE_REPLACED