` The Emperor Trump Float in the Viareggio Carnival - If It's Hip, It's Here
Skip to content This year’s Viareggio Carnival Trump Float, the Master Drone, by Fabrizio Galli has captured the attention of the whole world. Dressed like a Roman Emperor on steroids, Fabrizio Galli’s “Master-Drone” is a take off of a character from the miniature war game Warhammer 40,000. In its right hand, the float carries a sword with a ring of blue Twitter birdies on its hilt. Dazi Vostri (“your taxes”) is inscribed on the blade. 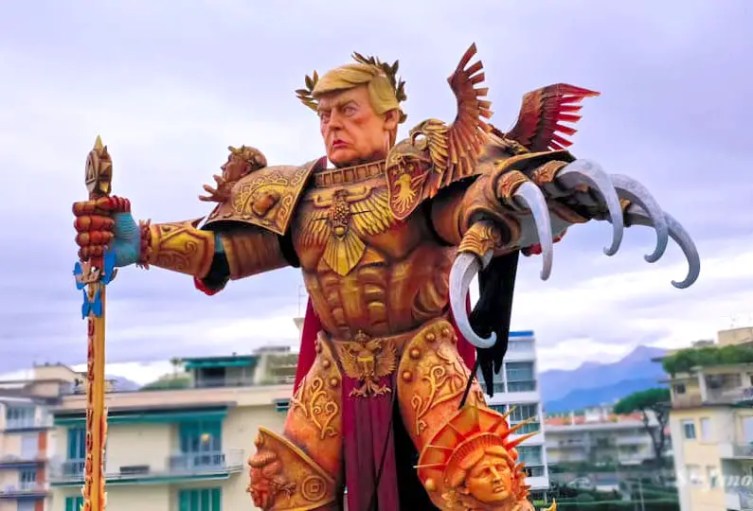 The Carnevale Di Viareggio festival in Italy is attended by about 600,000 people annually and is famed for its papier-mâché sculptures. The largest of which can be as heavy as 40 tons and often carry a political message. In the carnival’s past years Donald Trump has been depicted in a more unflattering light: The political satire of Viareggio Carnival has had millions of views, thousands of likes on social media and contact requests from the most important newspapers in the world since the release of “Il Pa-Drone” (Master Drone), the allegorical float dedicated to the US President Trump, competed in the 1st category of Italy’s Viareggio Carnival. “The Master Drone represents the superlative myth of power over the whole universe”, creator Galli said. 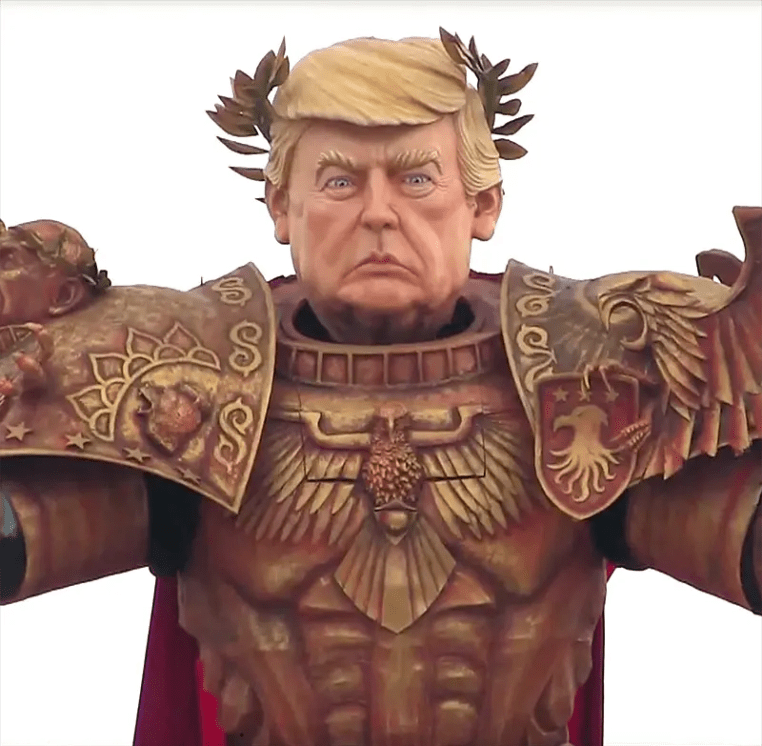 The majestic papier-mâché work of art caught the attention of Donald Trump’s entourage and Emerald Robinson, chief-correspondent of the White House, who began to follow Galli on Twitter and shared the images of the float dedicated to The Emperor God on his social media channels.

In few minutes the news had been shared by a large part of the world press: from Time magazine to Business Insider, from Fox News to Newsweek, from Huffington Post and Euronews to the Arab-Al-Bawaba and the Russian RT News.

The float was meant to emulate the “dominant character” of the war game Warhammer 40,000, with the soundtrack of the Sabaton. Although it’s gaining attention for its gigantic dimensions – almost 20 meters high – the buzz is mostly for the theme: Fabrizio Galli took the ambition of the American president to relaunch the missions on the Moon and to create the first space army palpable.

The time of intellectuals, philosophers and of old and worn culture is over. We have entered the era of fantasy, video games and virtual life. The dominant male par-excellence has arrived, democratically, and is now here, among us. The Pa-Drone* flies over the Viareggio promenade and now, as written on the float, “Dazzi Vostri”**.

*Union between “Padrone” and “Drone”. Padrone in Italian stands for “Boss”, and Drone has the same meaning.
** Meaning: The world has now to pay the “price”. “Dazzi vostri” is similar to the colloquial expression “Cazzi Vostri”, which stands for “and now is your own mess”.