` Cecil Beaton Sketches as Fabrics - If It's Hip, It's Here
Skip to content Legendary photographer, costume designer and artist, Cecil Beaton has had some of his wonderful drawings immortalized in a new fabric and wallpaper collection from Beaudesert of London.

Launched at this year’s upcoming London Design Festival in September will be a collection of silk, linen and cotton fabrics and wallpapers based on the sketches of Cecil Beaton; one from the Ascher Studio archives and the rest from The National Portrait Gallery printed by Beaudesert of London.

Combining 20 years experience in interiors at the highest level with a Cambridge art historical background, Beaudesert director Andrew Ginger has also acted as editor for the house collection of archive document hand prints for the last 10 years. It is his passion for the work of Sir Cecil Beaton which has driven this first collection from the unique Ascher Studio archive. 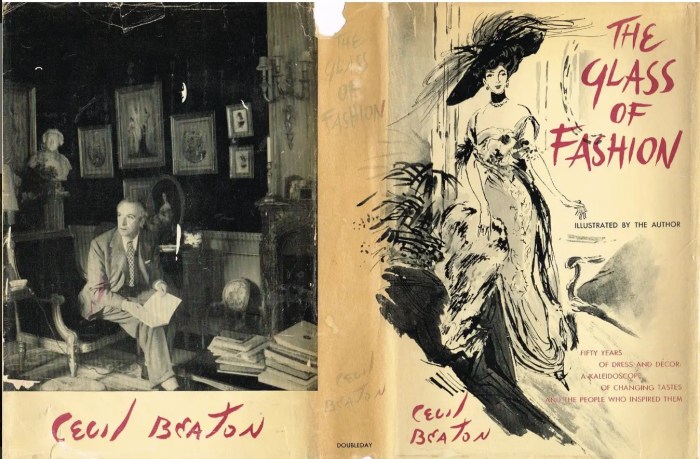 The ‘Sketchbook’ collection takes Beaton’s fashion drawings largely inspired by his 1954 book ‘The Glass of Fashion’ (shown above) and reinvents them as fabric and wallpaper. This award-winning* collection features his art deco women, sketches of 1929 beauties, fashionable hats, whimsical sailors, his cross check pattern and a surrealist interpretation of Garbo’s Eye, with whom he had an affair. (*’Beaton Beauties’ Winner, Best of the Best Awards, Best New Fabric Print 2008, Living Etc / Focus 2008)

As of right now, the fabric and wallpaper collection consists of the following patterns and colors. CRISS CROSS CHECK (for which I only have a black linen example): These wallpapers and fabrics are available exclusively in Los Angeles at the Suzan Fellman Showroom (yes, the same woman whose crystal animal horns I blogged about the other day).

Beaton launched his career as a ‘society’ photographer in 1926 with an exhibition in London which won him an immediate contract with Vogue, where he worked for the next thirty years. His style was inspired by figures such as E.O. Hoppe, Edward Steichen and Baron de Meyer, the most successful magazine photographers of the 1910’s and 1920’s. Beaton’s fascination with glamour and high society prevailed throughout his life and in 1937 he became court photographer to the British Royal Family. He also became a successful stage and costume designer, most notably for ‘My Fair Lady’ and ‘Gigi’.

Some more examples of his costume designs and drawings: above: costume sketch for Audrey Hepburn in My Fair Lady above: Another costume sketch for Audrey Hepburn above: An archival drawing of his above: his costume sketch and the final result for Leslie Caron in Gigi

Some examples of his photography:

Watch 3 Urban Artists As They Design The Lucha Libre Bottles for 1800 Tequila.