` All 5 Brian Williams Rap Mash-Ups - If It's Hip, It's Here
Skip to content 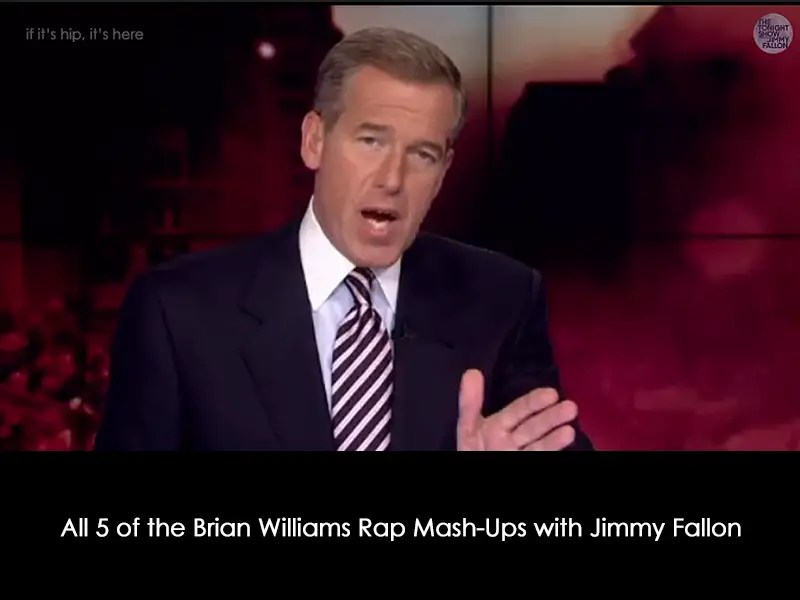 I posted this on Faceboook a few minutes after it aired Wednesday night because I was so impressed with it. Apparently, I’m not alone –  it was the number one trending item on Facebook all day Thursday. So, for those of you who have not been watching Jimmy Fallon’s first week as host of The Tonight show, I will share it and all 5 of the Brian Williams Rap Mash-Ups.

You may not know that this was not the first mash-up with NBC Nightly News managing editor and anchor Brian Williams edited to appear as though he were rapping. Although the previous versions were not as seamlessly done nor were they nearly as funny. The Brian Williams Gangster Rapper feature became somewhat of a running gag on Jimmy’s Late Show with versions to Warne G, Marky Mark and The Funky Bunch, N.W.A. and Snoop Dogg.

Prior to this epic one, there were these four – albeit not quite as well done.

Followed by this one on June 6th, 3013:
Brian Williams Raps Warren G’s “Regulate”

and then on Jul 29, 2013 was this one:
Brian Williams Raps Marky Mark and the Funky Bunch’s hit “Good Vibrations.”:

Perhaps now that Jimmy Fallon is hosting The Tonight Show, more eyeballs are seeing them. But he has many more tricks up sleeve and I’m looking forward to them.

Airbnb Invites You to Spend The Night in Carrie Bradshaw’s Apt.