you are here: if it's hip, it's here » snowglobes

We’ve brought you multiple stories about snow globes as art, products and installations before. But this is a slightly different interpretation on both scale and meaning. The Past Is A Foreign Country is a life size sculpture created by artist Friedrich Kunath. An installation in the 2011-12 group show, The World Belongs to You, at Palazzo Grassi, the artist’s autobiographical story is depicted by a man whose head is encapsulated in a giant snow globe. END_OF_DOCUMENT_TOKEN_TO_BE_REPLACED

This has got to be our favorite Snow Globe of the year, and we like snow globes. This hilarious hand painted polyresin snow globe uses President Trump’s actual November 7th, 2012 tweet about Global Warming as the basis for its theme. END_OF_DOCUMENT_TOKEN_TO_BE_REPLACED

I first introduced you to artists Walter Martin and Paloma Muñoz and their work way back in 2007 and then again in 2009 . The couple have continued to create their one-of-a-kind Snow Globes with a slew of new ones made in the past two years. END_OF_DOCUMENT_TOKEN_TO_BE_REPLACED

The officially licensed Lucasfilms Interactive Star Wars Wireless Snow Globe Speakers by imp, a faction of the Japanese electronics company Amadana, are not just beautifully made, but are Bluetooth-enabled and sync with your smartphone or tablet to create a musical “snow powder dance”. END_OF_DOCUMENT_TOKEN_TO_BE_REPLACED

Sculptor Nathan Prouty’s Graduate Thesis Exhibition, A New Kind of Living, encompasses miniature representations of his own life inside custom made snow domes which, according to the artist, attempt to simultaneously hide and expose his own unease with the world around him. END_OF_DOCUMENT_TOKEN_TO_BE_REPLACED

For the past few years, the first LEGO Certified Professional in the UK, Duncan Titmarsh of Bright Bricks, has created large LEGO sculptures for Christmas and displayed them in various public venues in the UK. END_OF_DOCUMENT_TOKEN_TO_BE_REPLACED 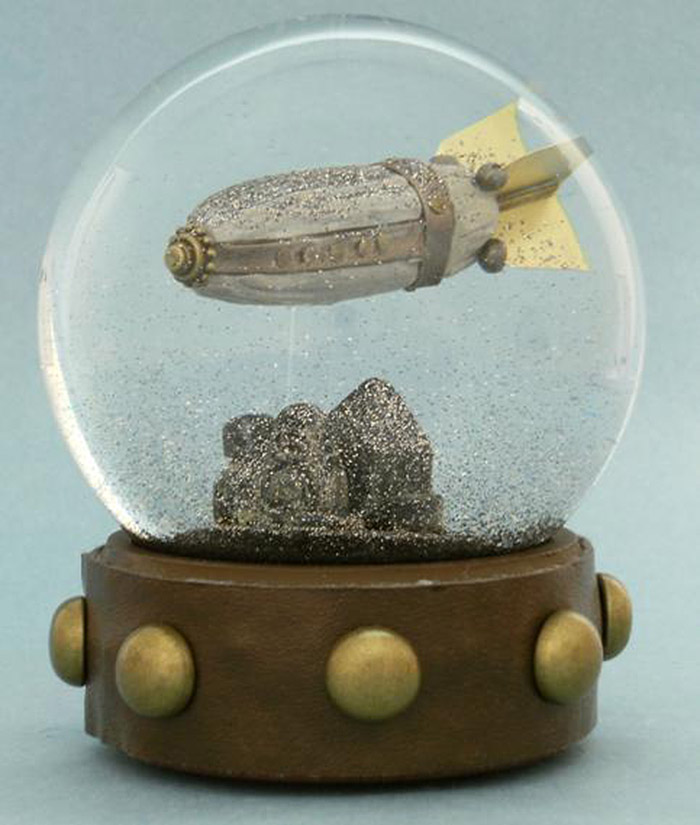 Two of my favorite things have been combined by artist Camryn Forrest. The Steampunk genre and the Snow Globe (or water globe or snowdome). Her intricate little shakeable sculptures combine elements associated with the Victorian age of machinery along with copper, silver or rich pewter glitter as the “snow”. The bases upon which the glass encased sculptures sit vary in materials, from marble to woods, and are decorated with “Steampunk” styled embellishments. END_OF_DOCUMENT_TOKEN_TO_BE_REPLACED

Designer and limited edition snow globes certainly have their appeal to the art world in addition to collectors of the shakeable snow-laden water-filled round glass objects. END_OF_DOCUMENT_TOKEN_TO_BE_REPLACED