` Jaguar F-Type Gets 2 Artistic Makeovers, One Car Wrap and One on Canvas. - If It's Hip, It's Here
Skip to content I’ve got two pieces of art-related Jaguar news for you today. The winner of their social-media led design competition and a new work by automotive artist Tim Layzell, both in preparation for the upcoming Jaguar-sponsored Clerkenwell Design Week.

First off, Jaguar has announced the winner of their social media-led design competition in the lead up to Clerkenwell Design Week 2014 (20-22 May), at which it will be the headline sponsor for the fourth consecutive year.

The winning design was created by freelance interior designer and architect, Justin Silke, and is entitled ‘Untamed Creativity‘. His design will be presented as a wrap on the Jaguar F-Type at at the upcoming Clerkenwell Design Week. above: ‘Untamed Creativity’, created by Justin Silke, is the winning design

The competition invited designers to showcase a concept which represents the theme ‘Fearless Design’ using #FearlessDesign on Twitter or Instagram. Entrants used 140 characters to describe the inspiration and details behind their concept and the winner was selected by Jaguar Design Director Ian Callum.

Ian said: “We were very pleased with the calibre of designs submitted, but the winning concept embodies Jaguar’s design ethos of visual drama and individualism.”

The design will become a focal point of the Jaguar suite of exhibits at Clerkenwell Design Week, sitting alongside a bespoke installation, created by Jaguar and fellow event partner Foscarini. This unique installation, inspired by the new Jaguar F-TYPE Coupé sports car, will be presented as an illuminated sculpture in the Farmiloe Building’s dramatic atrium.

Alongside these exclusive exhibitions will be a production version of the new Jaguar F-TYPE R Coupé, the most dynamically-capable and performance-focused Jaguar ever. Winner of 2013 World Car Design of the Year in convertible form, the new Coupé version adds a dramatic roof line inspired by the Jaguar E-type. The F-TYPE Coupé is the realisation of a long-held ambition of Jaguar Director of Design Ian Callum to create a two-seat Jaguar sports car.

Clerkenwell Design Week takes place across Clerkenwell from 20-22 May 2014. To register for free tickets visit: clerkenwelldesignweek.com. 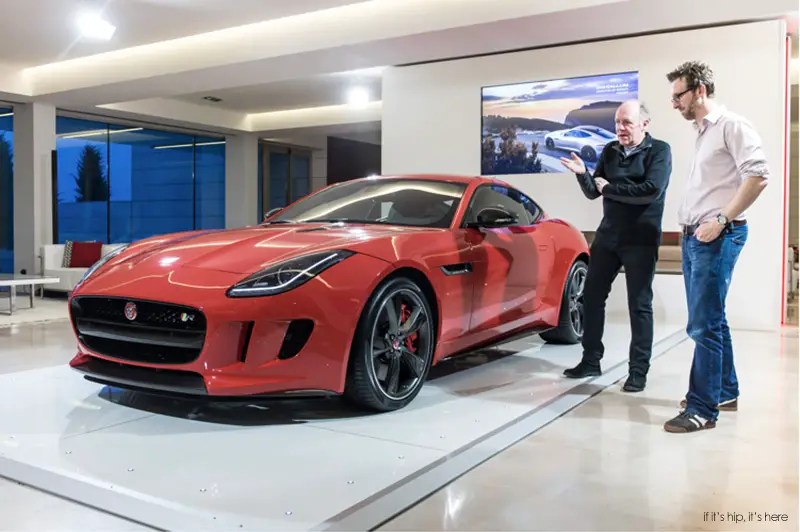 In other Jaguar news, The Jaguar F-TYPE Coupé has been immortalized on canvas by one of the world’s leading automotive artists, Tim Layzell 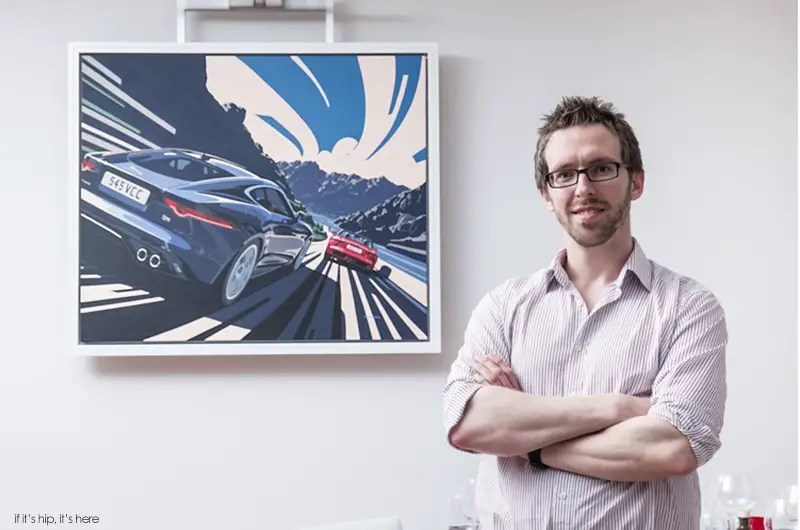 Ian Callum, Jaguar’s Director of Design, said: “As a design team, it’s paramount we create Jaguars that make people smile. As Tim’s art also makes me smile, asking him to produce a painting to commemorate the launch of F-TYPE Coupé was a natural fit – and the resulting work is very special indeed.” above: Ian Callum and Tim Layzell with Layzell’s artwork.

Tim Layzell, began his career at just 13 years of age when his work was recognised by the British Racing Drivers’ Club. 19 years on, Tim’s work sells to collectors worldwide. Jaguar has always been a favourite manufacturer for Tim – one of his BRDC award winning paintings was of the 1953 Le Mans-winning Jaguar C-type – so the opportunity to get involved with a project around F-TYPE Coupé was immediately of interest.

“I was, of course, very excited,” said Tim. “To me, the F-TYPE Coupé is everything a sports car should be: beautiful, fast, and it sounds amazing.

“The angle of the Coupé that I’ve chosen to paint shows off some of what I feel are its most exciting design cues; the tail lights, the deep-draw rear wings and its dramatic roof line. I wanted to paint it in a situation we’d all love to be in, driving through the mountains in late afternoon sunlight and shadows, while perhaps chasing another piece of exotica, in this case the F-TYPE Convertible!” all information and images, unless otherwise noted, courtesy of Jaguar.