The Residencial Capela Joá by Bernardes Arquitetura appears like a religious tree house. Built on stilts and suspended above the affluent Joá neighborhood of Rio de Janeiro, the chapel’s rectangular glass structure emanates a mystical orange glow from between the branches of its tropical surroundings. END_OF_DOCUMENT_TOKEN_TO_BE_REPLACED

Along with many other design fetishes (swimming pools, aquariums and miniatures to name a few), I have a thing for treehouses. And this astonishing treehouse created as an arboreal Man Cave in Malikoff, Texas by Pete Nelson and his crew will have any man (or woman) drooling with envy. END_OF_DOCUMENT_TOKEN_TO_BE_REPLACED

The other night I was watching Treehouse Masters on Animal Planet and caught an episode where Pete Nelson and his crew from Nelson Treehouse and Supply were constructing a 200 foot treehouse that would function as a brewery tasting site for the craft-beer loving folks who own The Mohican Cabins and The Grand Barn, a popular wedding venue in Ohio. END_OF_DOCUMENT_TOKEN_TO_BE_REPLACED 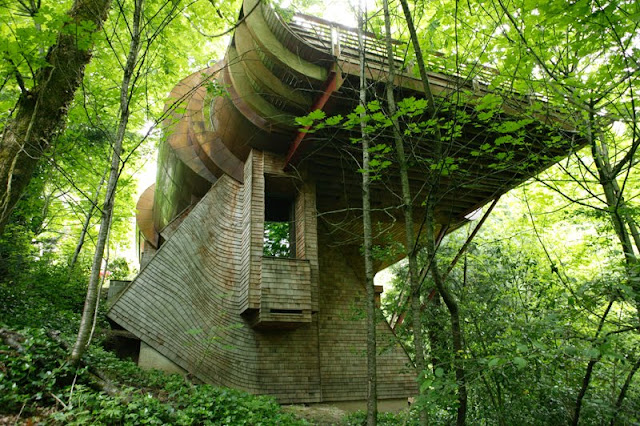 Located on a flag lot, a steep sloping grade provided the opportunity to bring the main level of the house into the tree canopy to evoke the feeling of being in a tree house. END_OF_DOCUMENT_TOKEN_TO_BE_REPLACED 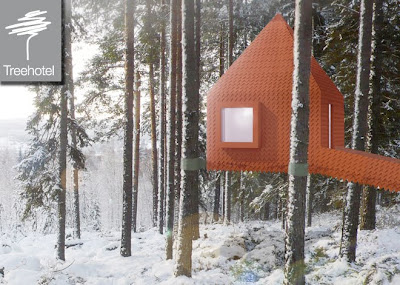 The Treehotel, run by Britta and Kent Lindvall, is a cooperative concept between well-known designers and architects. The result is a unique collection of hotel rooms (6 completed and open for booking as of this month) perched up in the pine trees of Northern Sweden. The concept “live in a treehut” is given a new dimension, created in harmony with nature and ecological values and is built on the philosophy to find another way to experience the value of a forest rather than cut the trees for industrial use. END_OF_DOCUMENT_TOKEN_TO_BE_REPLACED 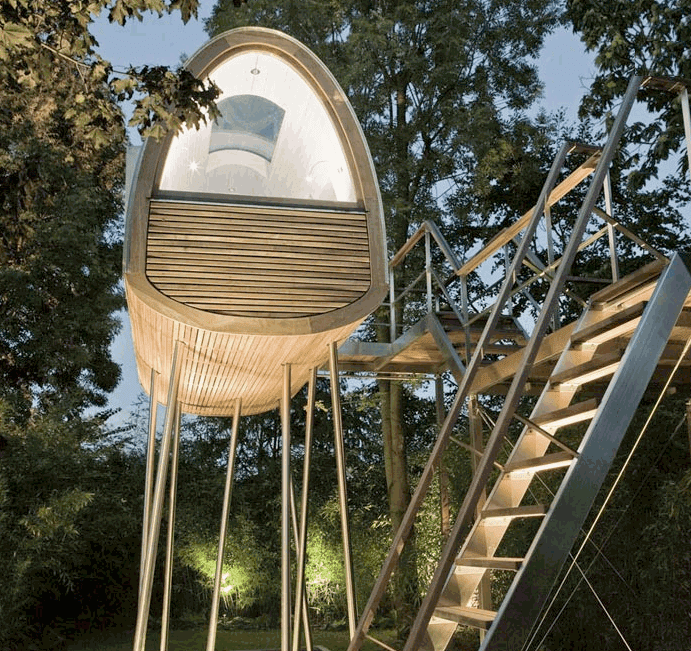 above: Baumraum’s King Of Frogs treehouse at night

When it comes to tree houses in which even the most urban dweller would feel at home, no one tops Baumraum of Germany. END_OF_DOCUMENT_TOKEN_TO_BE_REPLACED

Rockefeller Partners Associates‘ stunning Mandeville Canyon Treehouse is presently up, along with four other modern homes, for Arch Daily’s Building of The Year . Voting ends today, and all the nominees are shown here later in this post. END_OF_DOCUMENT_TOKEN_TO_BE_REPLACED